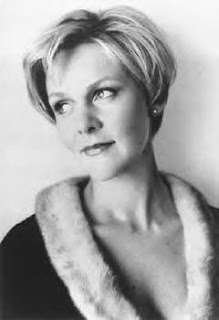 First of all, Barbara Bonney is completely badass. Not just one of the greatest singers of her generation, but also one of the funniest and most charming. She's one of my all time favourite lyric voices, so fresh, so powerful, so effortless, and always with such care for the text and above all the composer.

Her care for young singers was very evident here as she approached all with warmth and total encouragement. She's a complete natural in front of an audience, whilst never appearing self regarding or a show off. Just a joy to watch and spend time in the presence of.

First Alison Rose sang Pamina's Aria Ach, ich fuhl's, a Bonney staple. Rose's voice is youthful, lyric, beautiful, but with a pleasingly tart edge that makes it affectingly direct - never disposed to vocal tricks, this is a very well trained voice, with a beautiful tone, and most importantly with a very conscientious musician behind it, who I am sure will grow into a very considerable artist. Bonney said she should be singing this role now at Covent Garden, at the Met, in Vienna and in Munich, and that the timbre of her voice "got her deep". I am inclined to agree. First class stuff. A few of Bonney's criticisms were common to more than one singer - first posture. All tended to be slightly slumped forward, with the head position not quite raised enough. The difference in sound in Rose's voice when Bonney held her hand behind Rose's head as a guide was subtle but decisive, and the lines seemed to flow more beautifully, and with less effort.

Another thing Bonney consistently remarked on was proper placement of vowels. The schwar sound is to feel as wide as possible, and she told lots of anecdotes from various great singers about them saying the sensation was as though they were singing through their ears. Of course this is, as with almost all singing pedagogy, metaphor, but it's not fanciful at all - teachers and students of singing need to build some kind of language of metaphors together to communicate in, because virtually all of the machanics of singing is hidden inside the body, and controlled by involuntary muscle movements. It's no wonder that it's so hard. One of the reasons why masterclasses are so often unhelpful, and indeed confusing for young singers (and audiences), is that this metaphoric language is so different for each singer, so the simplest ideas can be expressed in the most disparate terms. Every single one of the students seemed to benefit enormously from Bonney's guidance however (all had worked with her a few times in the previous few days) and the difference in sound in all of them was immediate and always for the better. Quite amazing, and so satisfying to witness. She made everything seem so simple!


The advantages of this wide placement of these "horizontal" vowels, were not just in tone and timbre, but also in stopping the voice from tiring - relaxing between the more vertically placed "closed" vowels, or rather using completely different muscle groups ensures that a singer will be able to sing for much longer and with less effort.

The other singers were all very good, accomplished, all doing lovely things. Meghan Taylor (potentially very interesting voice, with a very attractive timbre), Harriet Burns (very light soubrette sound who makes singing high and quietly seem easy), Jenny Stafford (again an attractive lyric voice though is Anna Bolena really appropriate vocally at this age?) and Jane Monari (generally sang so loud that all inhales and quiet notes sounded hoarse, but actually quite colourful once Bonney convinced her to sing at a normal volume!) all received very specific and useful advice from Bonney, and as I say, the difference in sound and quality was immediate and very noticeable in all of them.

But in the middle of these, we heard Sarah-Jane Lewis sing Porgi amor from Mozart's Figaro. Bonney had not a single criticism of it. Her voice is simply astounding. In terms of tone, one of the most beautiful voice I have ever heard in live performance. The sound reminds me of Jessye Norman spliced with Te Kanawa - glowingly warm, gorgeously full, bursting with overtones. As soon as you hear it, you know it's going to be an important voice. Very good legato also. She's not yet the finished article as she has been trained as a mezzo for a long time so the top doesn't come that easily yet, but when it does, she's going straight to the top of the profession. It's also a rather large sound, so I worry that she'll be pushed into heavier repertoire too early (something to be very strongly guarded against), but she should be singing in all the major opera houses within five years, and hopefully first as the countess in Figaro. Ariadne also sprung instantly to mind (though later in the career). Come Scoglio was less secure with it's ridiculously long coloratura phrases, but still very very good, the opening truly thrilling in both the high notes and low notes.

I have to be *slightly* measured in my judgements - it is very difficult to be sure in this room (which is extremely small) about how singers will sound in the theatre. Aioefe Miskelly for instance sounded tight and not particularly interesting in a Schubert lieder abend in there, but in the theatre the voice bloomed and shone as Pamina in the recent Academy Zauberflote. But Lewis just knocked me over, and if she sounds even better on stage, then so much the better!

And why on earth wasn't she singing the role of the composer in the lunchtime semi-staged Prologue of Ariadne auf Naxos? That performance revealed messy playing from the orchestra (I presume due to lack of adequate rehearsal: it's very hard) and lack of strong direction from conductor Elgar Howarth. Bass Adam Marsden again impressed me as the Music master (just as he had in Zauberflote), and Jennifer France might make a very charming Zerbinetta if the coloratura is in place (the prologue hardly requires it).
at 12:36