Knussen at 60: Where the Wild Things Are and Higglety Pigglety Pop! opera and orchestral works at the Barbican 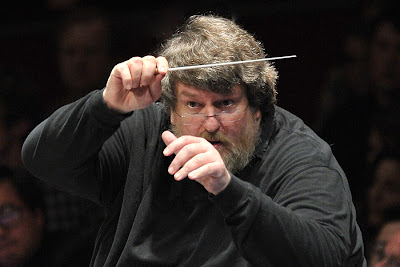 This was part of one of those superb Barbican "Total immersion" career retrospectives of a significant living composer. I remember very fondly the Get Carter! one a few years ago with Knussen conducting dazzlingly precise accounts of Elliott Carter's clarinet concerto and double concerto. Knussen then is a conductor of the utmost élan and precision, using small, sensitive gestures to lead his colleagues through the most monstrously complicated works. Almost the same could be said about his music, whose complexity and beauty is comparable with many composers from the last third of the 20th century, but he outdoes them all not just for filigree orchestral detail, sculpted with thimble, matchstick, needle, but also in "perpetual dazzle", the internal energy and tension of which has surely not been matched since Strauss and Shrecker (and possible early mature Carter). Form hardly seems to register when you're simply (and desperately) trying to follow the quicksilver play of texture and colour, but the satisfaction one experiences and sense of "rightness" of every piece one feels must derive from a meticulously planned structure beneath the surface, which he then clothes with a glittering, pellucid tapestry of shimmers and shouts. The sense of evanescence to all this sparkle provides a bitter-sweet and rather touching edge - he is similar in this to Stravinsky or Janacek (in most other respects very different composers), who will show us something tantalising for just a second before moving on, and we're always left grasping after these tiny moments, crystalline fragments of sound, willing them to be worked into Teutonic climax and apotheosis, but the lack of this is part of what makes this music so beguiling and bewitching and what keeps us returning.

And it's never meretricious, never sparkle for its own sake - the notes speak and sing with joyous abandon, each one a tiny voice adding to the sweeping choir, music with something urgent to express. Nor is it all sweet - Knussen knows how to produce a primaeval din when he wants to, and his brass and wind writing can be overwhelmingly, shatteringly brutal (though never crude). One must admit that there is a certain lack of range, which is the only thing that could be said against this music, but if you're disposed to what it offers, it is a cavern of half lit delights, beauties and thrills. Carterised Ravel is what I would say if we are playing the comparison game. Or maybe Straussified Takemitsu. 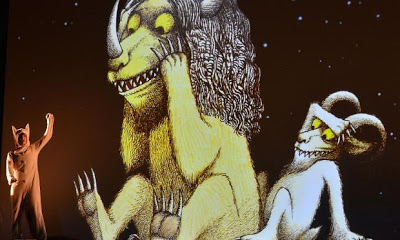 His diptych of children's operas again offer comparisons with Ravel in their fleet paced absurdist action and precisely characterised protagonists with vocal interest rather secondary to the coruscating welter of orchestral colour. Based on Maurice Sendek's famous children's book, Where the Wild Things Are offers obvious challenges staging wise. Here they were navigated in a semi staged production by Netia Jones which made heavy use of live video elements. Unfortunately it was absolutely beset by technical problems, from microphones popping and crackling incessantly to surtitles not showing up, and the live video elements, potentially interesting but also very dominating, constantly skipping and jerking along as if they had never been tested: seriously annoying - if you're going to do this, get it right! It put the performers and audience on edge and distracted from the music. Claire Booth as the child Max valiantly strode through these difficulties, not least the challenging music, though I thought her diction was inappropriately proper for a raging, screaming child. The libretto too seemed wooden and lethargic - why was everyone speaking so poetically and formally?

I don't know if it was Jones' idea or Knussen's to have the mother (Susan Bickley) throw a drunken party with the attendees bearing striking resemblance to the Wild Things. Does this make them just the basis of Max's wild imaginings, or are they more directly involved? Presumably the suggestion of child abuse is not a desired connotation of this addition to Sendek's original plot. It sort of worked, but was also a distraction from the centre of the action, and partly because of the failure of the animations, and partly because of the lack of 3D characters (I mean this literally, not metaphorically as the usual opera critic complaint goes!) there was a certain lack of magic to proceedings, and the marvellous score had to do most of the heavy lifting in this respect. 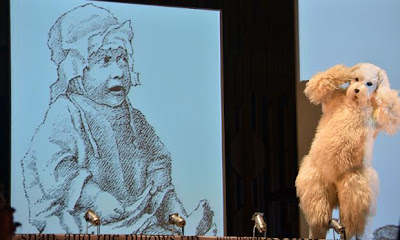 Higglety Pigglety Pop fared better staging wise, again heavily relying on live video design, though the bizarre story and illogical dialogue makes it a hard piece to engage with emotionally. I really wonder what it was about it that meant that Knussen wanted to lavish such evidently enormous reserves of creative energy and effort on it - there is absolutely no letting up of attention to detail in every parameter in these works compared to his norm, both of which are composed over the much larger spans of time than he usually traverses. There are no concessions to them being "children's operas" either; one almost feels they're too much for children, (too good even!) much like the most famous children's opera of all, Humperdinck's Hansel and Gretel, that cornucopia of compositional generosity, children's music on a Wagnerian scale.

One moment that resonates particularly within the opera is the last scene. Finally, Jennie the dog has "made it" and has become the leading lady in the local theatre. The play is called Higglety Pigglety Pop, a sort of farce in Mozart pastiche, whose entire libretto is it's title, and whose action is as absurd in relation to the preceding action as the opera that contains it is to real life. (clue: very very absurd). But the characters keep repeating the exact same movements and actions choreographed to the same music again and again, which both adds to the lunacy, and becomes quite uncomfortable. When does it end? The same characters die and reappear, the same story is told and retold. We start to realise that this is a comment on our own fascination with theatre and opera, particularly our repeated viewings of the hallowed, hackneyed canon: we watch the same stories and characters again and again, living, falling in love and dying, again and again, always the same, highlighting particularly that it is even weirder for the performers than it is (or should be) for us.

An extraordinary end to an extraordinary piece, and I left the theatre dazzled by what I'd heard and thoroughly entertained by what I'd seen too. Both operas were well sung, though I really don't like amplified operatic voices as they sound so harsh and flattened timbrally, and they also never seem to blend with the orchestra. Lucy Schaeffer was a heroic Jennie, and the other parts well taken. Ryan Wigglesworth lead very good performances of both works, with the Britten Sinfonia on their best form.

On Sunday I had the pleasure to attend an all Knussen orchestral programme with the BBC Symphony Orchestra, this time conducted by the composer. It is an absolute joy to see him conduct generally, and I have extolled the virtues of his approach already - No one does this sort of ultra complex repertoire better (Boulez and Barenboim are equals) - but it was a special treat to see him lead his own music. Knussen has commented himself that there must be some sort of psychological underpinning to a very large man such as himself being so obsessed with tiny details and gestures (in his music, in other art, in life)- one clue might be that his ungainly gait and form are immediately transformed when he sits in front of his orchestra, apparently free now to make to make the most minuscule and efficient movements. The orchestra seemed fully on board, playing passionately and with responding deftly to Knussen's leadership. Flourish with Fireworks made a suitably impressive impact with its skittish fanfares and bold contrasts. More subtle and magical was the incredible early Choral for wind band, with its wonderful hazy scoring and particularly notable flute writing. The Whitman Settings brought Claire Booth to the stage for what was maybe the most beautiful piece of the evening: endlessly rapt and subtly shaded settings of some visionary Whitman poems. Claire Booth is an exceptionally engaging singer to watch, even if her technique is very unorthodox and sometimes leaves much to be desired. She has a very "instrumental" timbre, pure, bell like, always immaculately in tune, though also lacking legato or a supported line, but it seemed absolutely appropriate here and she sang with serious intent. The first half ended with the Horn concerto, a dramatic showpiece for the instrument, traditional in its heroic treatment of the solo instrument. Knussen also provides some luridly cartoonish orchestral touches so that the thing has more than a hint of ironic John Williams-esque grandeur. It's a wonderful work and was masterfully played here by Martin Owen.


Leila Josefowicz was sadly trapped in the US due to the recent hurricane, and so instead of the violin concerto we got the Two Organa instead, both very beautiful works, slightly pared down compared to the richest Knussen, but still glistening and gleaming as always. His beautiful Requiem "Songs for Sue" composed in memory of his wife half a decade ago, was dedicated by a visibly moved Knussen to the recently deceased Henze. Had Carter died two days earlier, I'm sure he would also have received a dedication as Knussen has been just as, if not more, committed to that composer. I'm not convinced that the Requiem is as great as the infinitely wrought Whitman settings, and like all the later music presented here it offers a marginally pared down aesthetic. The voice is still unmistakable however, intimate and luminous. We finished with the Symphony No.3, an enigmatic work of surprising darkness, though again with moments of sublime beauty. A wonderful concert.

This concert was scandolously underattended, though the amount of pre-eminent British musicians, conductors and composers in the audience spoke for itself. I left in a sort of dreamy elation, awed by the musical mind I had glimpsed and revitalised by its generosity and brilliance. Pure pleasure is rarely so generously proffered.