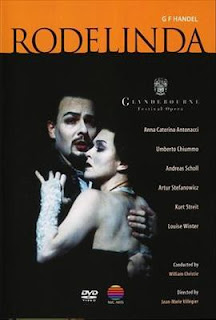 Director: Jean-Marie Villégier
Conductor: William Christie
Orchestra of the Age of the Enlightenment

Rodelinda dates from 1725 which puts it bang in the middle of Handel's operatic development - just a little after the more commonly encountered Giulio Cesare. It's a very beautiful score consisting of 25 solo arias (plus recitative), just three ensembles, and not a chorus to be seen. This does make it rather difficult to stage as so much of the work is devoted to solo scenas in which interaction between the characters must be either arrested or invented, but the musical rewards are great, and the situation interesting.

The story is too complicated to give a synopsis of here, but it involves a love quadrangle wrestling for power and love. Standard Baroque opera shtick then, but the novelty is that Rodelinda has to choose between her child's life and betraying her husband. Director Jean-Marie Villégier has a very reasonable stab at presenting the incredibly complicated plot, but where his production succeeds best is in marrying a very stylised visual and dramatic aesthetic with real emotion so that one is never alienated. The sets and costumes look 1920s, but the colour palette is very muted indeed (with makeup to make faces paler) suggesting 1940s film noir visuals, and the acting is consistently stylised to match the dramatic conventions of the silver screen. It all works remarkably well, and the opening act is particularly powerful. Unfortunately, in Act III the same intensity is not maintained, but overall this is a very well executed piece of directing.

The singing from all is very decent without being world class. Anna Caterina Antonacci is rightly the star of the show, very committed to the role and she perfectly understands the style that is being aimed at. Vocally she is good, communicating with conviction and she is adept at the coloratura, though the fundamental timbre is not glamorous (and even becomes quite rough in places) and there are not many vocal niceties (forget about trills). Andreas Scholl makes his operatic début here and is in very good voice and though not bad dramatically, his actions are a bit balletic and unmasculine, so the character is not that convincing. Kurt Streit does well as Grimoaldo, and while it's not the most beautiful voice, this is a major tenor role requiring a lot of coloratura in which he acquits himself admirably. Louise Winter's unfortunately lacks any sort of reasonable chest register which the rival mezzo role of Eduige clearly calls out for and so is miscast, but she makes a pleasing schemer along with the excellent Umberto Chiummo as the villain Garibaldo. William Christie is simply beyond reproach in the pit with the Orchestra of the Age of the Enlightenment - gorgeous, characterful playing as almost always with this band.


Here is the gorgeous duet which closes Act II, for me the musical highlight of the opera. I'm not sure I've heard it more beautifully sung than here.