This revival of Glyndebourne's 2009 production of Falstaff I found to be a mixed bag. The opera is updated to wartime Britain (or 1946 as we are informed in the director's note), everyone having a jolly old time, the horrors of the worst war in the history of mankind having left no mark whatsoever on the rambunctious inhabitants of Windsor (though they are now growing their own veg). The sets by Ultz (just Ultz...) posess a boxy artificiality - a self consciously set-like tudorbethan backdrop for the contrived antics. The direction by Richard Jones (revival direction Sarah Fahie) mirrors this artificiality, and the movement is very choreographed throughout. Sadly it doesn't at all avoid the obvious dangers of this approach and the character's motions very rarely seem to come out of palpable intention. It's worst for the women who don't seem to be able to do anything on their own, always moving as a pack (though of course Nannetta keeps breaking away for her love scenes). There are a few smirks to be had, but most of it felt so overly staged and lacking in spontaneity that titters rather than belly laughs laughter were the order of the day. 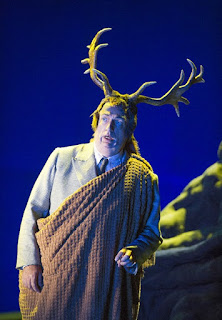 Still there's much to enjoy, not least Laurent Naouri's rather personal take on Falstaff which included certain stylistic things that are unusual for Verdi singing. The extremity of the dynamic contrasts within the phrase and the concern for text over the long line worked for me here, as did his energetic and quite charming stage manner. Unfortunately the one serious moment of reflection in the opera, the beginning of Act II, where Falstaff laments the state of society and realises that he is ageing, is played completely for laughs - he strips off, revealing his flabby (but disappointingly normally proportioned) body to huge laughs from the audience (there would definitely have been several members at least as amply proportioned though) and so the one place where the wartime theme might have enriched the poignancy of a scene, passes as for nothing. I have to say also that the trick playing was strangely joyless and Alice comes off rather badly as a cruel rouser of large scale bullying: we are mainly party to the infliction of humiliation and fear on an individual for the entertainment of the crowd. Part of the problem might be that the upper class Falstaff has lost most of his status and power by the 1940's and so the punishment for his his self delusion and desperate but not altogether very threatening lechery seems completely at odds with the crime - I mainly felt sorry for him and the end left a bitter taste. 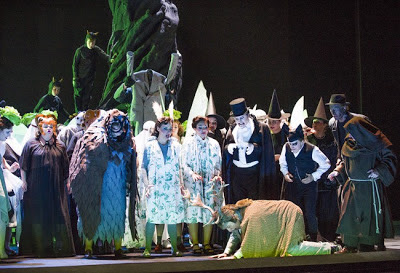 After hearing many good things about her from various sources, Ailyn Pérez disappointed as Alice Ford. She is an extremely beautiful woman with a very smiley demeanour, but the voice has very little presence in the theatre and failed to create the character in sound. The top, while covered, is her best range and at least projects. But Alice sits quite low as soprano roles go, and Pérez's middle voice and chest voice severely lack colour, bloom and volume. There's no trill and the small amount of flexibility that this role calls for seemed hard fought for. I was greatly looking forward to her ROH Manon next season, but now I'm quite wary: despite the fact that it's seen as a coloratura role, it requires tremendous support in the lower registers, and sits there for long periods of time. Curious, as there's a lot of buzz around her at the moment, so perhaps she was having an off night? 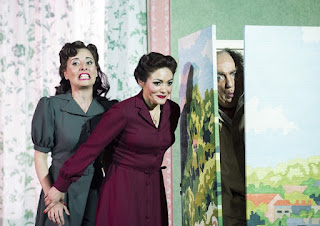 Susanne Resmark is a very decent Mistress Quickly, nicely acted and vocally assured, though just short of ideal. There's something awe inspiring about the true contralto voice that creates a special excitement and there are certain contralto roles that when sung well augment the appeal of an opera immeasurably - Mistress Quickly, Erda, Gaia, Ulrica all fall into this camp. Resmark has some of the elements and certainly has a very nice voice, but the very lowest notes lack body - this is a talented dramatic mezzo managing an alto role.

The young lovers both impressed, with Antonio Poli an appealing Fenton, but it was Elena Tsallagova's Nannetta that was the vocal highlight for me - this is a role sung near the beginning of many a light lyric's career, and Tsallagova nailed it on all accounts - those endless piano high notes were totally bewitching, and the timbre and colour of the voice is simply ideal. More please.

The Orchestra of the Age of Enlightenment are a mixed blessing in the pit. In what is by far Verdi's most refined and beguilingly subtle score, the attention to detail and colour that these superb musicians bring should be fully welcome, but strangely it feels undernourished in the score's quieter portions, while the grander moments of the score blaze with delightful colour. In the best bits, Mark Elder imbues it all with a soft hued beauty - it's the more baroque elements, the bustling detail, that ironically elude the orchestra, mostly played with a lot of attack but not enough body in the sound.