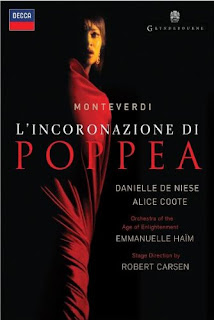 Conductor: Emmanuelle Haim
Orchestra of the Age of Englightenment

This is a slightly odd production of Monteverdi's great masterpiece. Carsen gets his cue almost solely from the Prologue which sees Cupid victorious in an argument with Fortune and Virtue about who has the most power. Carsen makes it a play within a play of sorts - Cupid hijacks an already started production of some other parable, to present his own story in which love is shown to be the most important force in shaping the lives of the characters. Garbed in red velvet like the omnipresent red velvet curtains and sheets that feature in the production, Cupid is present as an invisible shaper of events for much of the rest of the opera. While it is true that this opera is eros obsessed, the minimalism of the setting and the stripping away of political and social context takes with it much of the piece's richness, subtlety and interest. It's clear from the opening that Nero's world is meant to be that of the Glyndebourne audience's and so the blanks are meant to be filled in by this audience reflection, but this common director's trick rarely comes off in my experience. All in all there's just so much more that this piece can offer.

But there are positives. This production does do the sex very well indeed - the arching eroticism of the scenes between Nero and Poppea is extraordinarily intense (though perhaps doesn't evolve as much as it could do.) and the visual aesthetic supports this luxuriant intimacy. I find Alice Coote to be an awkward stage presence, especially in trouser roles, but she sings gloriously here, with huge dynamic and timbral range. Danielle de Niese is a fascinating and gorgeous presence as Poppea, not just physically, but vocally too - she's really committed to communicating every syllable of the text. Her breathing is very rough here which sometimes interferes but it's not a major defect. Her Poppea is turned on by Nero the man as much as she is by power - like Nero, she is a creature of emotion, and as a result for her the two can't be separated - her ambition is in a sense innocent. Nero's character is given a disturbing darkness in the scene following Seneca's dispatch - a homosexual encounter at a drunken party devolves into a cold blooded murder: his power unchecked, it seems only extremes of emotion can please him. The ending is strong: Poppea envelops herself in her enormous regal gown, but cannot leave it behind despite Nero's promptings, and we see that without external obstacles they are already drifting apart. Famously of course, Nero killed her less than a year later (as everyone is keen to point out in the DVD extra), kicking her in the stomach when she was pregnant with their second child, so this ending is clearly intended as an early intimation of this rift.

Tamara Mumford as Ottavia reveals an absolutely gorgeous voice, and she's a touching actress too, even if her role in this production is more rich woman spurned, than empress wronged. I also very much liked Paolo Battaglia in lovely voice as Seneca, and Iestyn Davies as a gentle, boyish Ottone.

Possibly the greatest beauty of this production comes from the pit though - Emmanuelle Haim leads the Orchestra of the Age of Enlightenment in a ravishing account of this score, endlessly shaded through sensitively selected changes in instrumentation. This is possible largely due to the enormous cavalcade of continuo players (10 in all plus Haim at the harpsichord and organ!) and the orchestral support in the love scenes is particularly noteworthy, surely accounting for a major part of their spine tingling intensity. Probably best that you just experience for yourself: