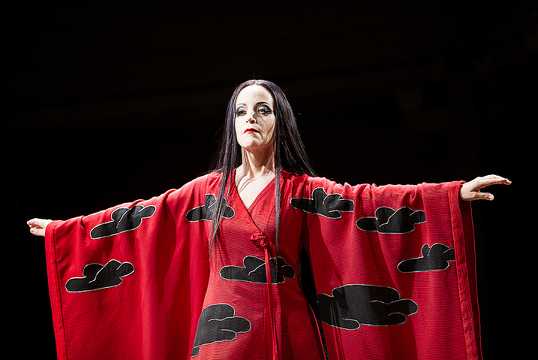 After my previous Puccini experience I vowed not to go to any more Puccini. But curiosity got the better of me and amazingly I actually enjoyed this Turandot quite a lot! Andrei Serban's production, revived here by Andrew Sinclair, is a totally silly and really fun romp, that scrapes the surface of the piece, to reveal more surface. There's a certain grotesqueness to everything, Sally Jacobs' designs included - the hideous crudeness of the costumes, the cartoonish avoidance of realism in all of the acting (Ping, Pang and Pong look and act like they are rehearsing for a panto. I'm not exaggerating one iota), the total lack of intimacy in any of the relationships. The chinoiserie in the design is so over the top and vulgarised that it seems to be a parody of the traditional approach to in some way represent China on stage - Serban seems to be showing us that the truly demented psychology, saccharine emotionalism and furious bombast of the score is all Puccini and not ancient China. Musically it makes sense too - the ubiquitous pentatonics are barely even a point of stylisation for Puccini - they are absolutely a hallmark of his writing in all his most characteristic work. The orchestration too, amongst Puccini's very best, always seems more Puccinian than self consciously "exotic" in the manner of the French impressionists when they want to conjure up "the orient".

Turandot is fascinating because it seems as though Puccini is virtually unfiltered in terms portraying what he loves. He deliberately produces the most violent, unsympathetic, self obsessed and callous central romantic couple in all of opera, taking every opportunity to alienate us from them - if anything Calaf is more unpleasant than Turandot, whose fractured mental state is perhaps ascribable to her oppressive, warped and neurotic upbringing.

This opera is seriously troubling and problematic when viewed through the lens of serious art. But by not requiring the singers to act (much less interact) Serban absolves the audience of the responsibility of taking the opera seriously as drama - no attempt is made to untangle the extremely disturbing character psychology or message of this piece, and having all the characters stand around doing stock gestures draws attention to what a silly and fun piece of Italian opera it is if Ping, Pang and Pong are accepted as the work's norm, rather than taking the Calaf/Turandot saga at face value. This is a risky business, approaching as it does almost a parody of Italian theatre, but Serban has made it visually engaging enough that it's never boring for a first timer like me. And you have to admire a director who makes the tenor wear what appears to maternity clothes during Nessun Dorma. I wouldn't choose to see it again however because the sole virtue of the show is spectacle. Kate Flatt's extensive choreography is attractive, feeds the eye, and again is mercifully free of orientalisms. The famous "problem ending" is ironically underlined as Liu is paraded in front of the happy couple on a hearse. The vertical red ribbons that we saw at the beginning of the show are dropped again, and this time pool on the floor like rivers of blood. The theatrical tenor of the rest of the show has not been dark, so it seems like a macabre and blackly funny illustration of what we've witnessed. In another context it would be chilling. I've yet to see a production that fully owns up to the psychotic cruelty of both romantic leads in a non panto way, but this production was really not aiming at that. It's just pure entertainment. You could almost call it: Turandot!

Lise Lindstrom's Turandot is a harsh decibel machine - a huge sound without colours, like cold steel. The voice is built like an inverted pyramid with its stentorian top, large middle voice, and rapid disappearance below the stave, but Lindstrom really can pack in the volume when required. Marco Berti's Calaf is not quite as huge, but it's still a big dramatic tenor, and as described already is short on dramatic or musical nuance. Again I enjoyed the fact that both voices were loud but totally unsexy as it drew attention again to the weirdness of the erotic content in this opera. Oddly great casting.

Conductor Henrik Nanasi led a powerful and driven account of the score, though perhaps disappointed in a few of the "high points" such as in "In questa reggia" which felt a little unclimactic. In other places, a little more delicacy and lushness would also have been appreciated, but balance and accuracy was good throughout.