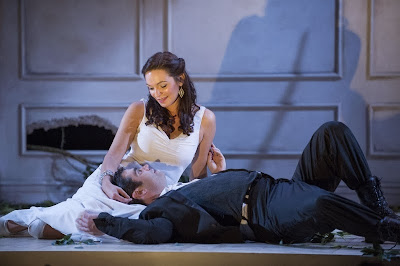 Thank the opera gods for English Touring Opera: no other full time UK company gives us as many baroque operas with such high quality singers, or takes as many risks with rarities - long may it continue! Cavalli's Giasone (1949) was one of the most successful operas of the 17th century, and it's easy to hear why based on this outing. The influence of Monteverdi is clearly felt in the pacy action as well as the lush, erotically charged score - in both these things it almost rivals L'incoronazione di Poppea. Like the more familiar masterpiece, the norm of the work is a very attractive recitative style that blends into ariosos and arias in a far more fluid way than does the late baroque. Already the separation of aria and recitative is more decisive than in Monteverdi though, so we're already on the road to the late baroque when the action can't move for arias. This music in this ETO production is extensively cut and reordered but the piece remains convincing as drama, and the action is fleet of foot. The tiny orchestra of eight, nine including conductor Joseph McHardy at the harpsichord, do ravishing work in the pit, matching the action sensitively and beautifully. One could scarcely hope for better - certainly better than any recording I have heard of the piece.

The opera's story, like so many Baroque opera librettos, relies on endless twistings of the course of erotic and romantic love, the painful emotional journey being infinitely more important than the destination. We are introduced to Jason and Medea on their wedding day, but already Hercules is calling Jason fulfil his duty and join him for heroic deeds. The fact that Jason is already married with children isn't even mentioned at first, so we are invited to buy in totally to the new couple, especially with music as sensuous as Cavalli composes for them. Soon though Medea's discarded lover Egeus appears, as well as a spy from Jason's wife Isiphile (who is still waiting for him on nearby Lemnos) - we cannot escape our past. A storm conjured by Cupid shipwrecks characters on, you guessed it, Lemnos, where Isiphile soon discovers Jason's treachery. He heinously tries to get the horrified Hercules to kill Isiphile by throwing her in the sea, but the plan fails, and it is Medea who almost drowns. Naturally the love sick Egeus now has a chance to prove himself and saves her from drowning - Medea, returns to his arms as a result. Jason's scheming is discovered, but amazingly he is forgiven by all, and he goes back to his wife Isiphile and his children. In the sense that there is a happy ending, the whole thing is a comedy, but one senses from this description the endless opportunities that Cavalli and Cicognini had to wring painful emotional situations out of the scenario, and they succeed admirably. There are also wonderful set pieces - At the end of Act I there is an exceptionally beautiful and convincing incantation from Medea with offstage chorus ("Dell'antro magico"), and there is a duet for the two wronged women, as well as several conventional love duets. What's so pleasurable is that the drama and music are rarely at odds. 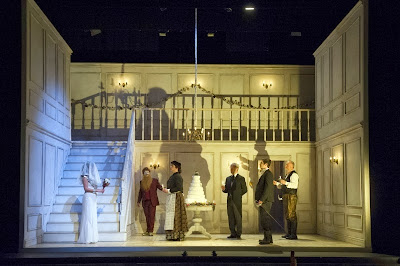 One constant irritation in both the score and libretto is the light relief character of Demus. His comedy is solely based on the fact that he stutters and has a hunch back - far be it from me to say that laughing at disabilities isn't funny (lots of people loved it) - the problem for me was that it was the same joke every single time and you knew exactly what was going to happen as soon as he made another entry. This aside I was gripped by Ted Huffman's production, which tells the story simply with the focus squarely on the acting and musical expression - and amazingly nothing feels far fetched or over done, however extreme the situation. Judicious use is made of the two levels of the set, though the scene change to Act II, showing the same interior, now semi destroyed and invaded by nature, is perhaps too slight to make sense of the supposed change in location. Samal Blak's designs this Autumn season are more interesting and successful than they were in the ETO's spring repertoire - here the period is timeless, with elements of classical, neoclassical and modern design used side by side, though the issue of style is elegantly bypassed rather than made a feature of the production. Ace McCarron's lighting designs support the set excellently and help tell the story very well. The translation by Ronald Eyre is good, focussing on poetic sense and clear story telling above rhyme - the exact opposite of the Pountney translation for recent ENO Fidelio which so vitiated that show.

It was wonderful to hear full sounding voices in an early Baroque opera, surprising even, when we're implicitly told by current performance practice that voices of that era were thin, reedy affairs. Hannah Pedley was glorious as Medea, with her strong sense of line, rich, firm middle voice, and very beautiful lower register. An understated, natural actress too. As Jason, Clint Van der Linde's beautiful counter tenor was also a real find - he possesses a hypnotically fluid legato that makes the character's cruelty all the more sinister. Andrew Slater's appropriately heroic and manful sounding Hercules was as convincing dramatically as these too. Catrine Kirkman's revealed a girlish soprano as Isiphile, and seemed almost too young for the role - she is after all meant to be a mother of two. As Egeus, John-Colyn Gyeantey's timbre was occasionally a little harsh, but his singing has a firm sense of bel canto, and he was very touching in his aria. Michał Czerniawski was announced as recovering from illness and though he sang perfectly well, his very understated vocal delivery in the role of Delfa was perhaps attributable to this. RCM student Peter Aisher was standing in for an indisposed Stuart Haycock as Demus, and brought an attractive youthful lyric tenor voice to an irritating role.

All in all, a lovely evening. The Britten theatre at the Royal College of Music was the perfect venue for this intimate music, showing off the voices and music to maximum effect. Do catch this rarity on the ETO tour. 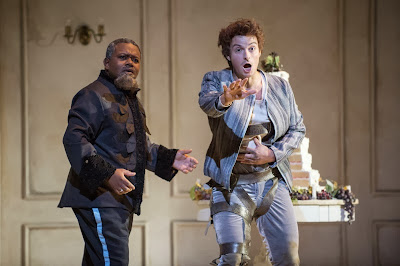