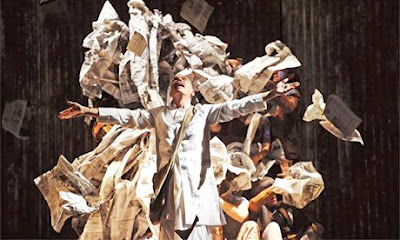 Of the American minimalists, Glass is the composer with the least native talent perhaps, but he is the one with the most unmistakable musical profile. Where Reich and Riley have continued to explore and develop their particular musical interests over the past half century, each producing a varied and wide ranging oeuvre, Glass has stuck steadfastly and virtually exclusively to his energetic yet static arpeggiated diatonic chords. Glass's music inspires bafflement, tedium and disgust in many listeners, and is with some regularity (and not unfairly) accused of mindlessness, banality and extreme poverty of invention. But to do this is to miss the point and ask of the music something which it is patently not trying to achieve. He is not interested in refining, or improving, or developing - either within each piece, or within his oeuvre as a whole. Unconcerned also with technical felicity, his orchestration is just as clumsy now as it was in the beginning of his career, his ear for instrumental colour crude and unnuanced. Similar things could be said for his harmony, melodic invention and rhythmic sense. This is all moot. His music cannot be adequately criticised in conventional terms because it is manifestly not playing the same game as most classical music. An interesting case.

The minimalist composer Tom Johnson said that his composition teacher Morton Feldman had encouraged him in the late 60s to "start with notes". This idea, expressed as it was during/after the avant guard of the 1950s and 60s, was first an encouragement to make "notes" rather than "sounds" the foundation of music (as Johnson fascinatingly goes on to explain, notes are precise and objective entities, while sounds are entirely subjective and unrepeatable phenomena). But Feldman's exhortation is also an encouragement to make aural phenomena rather than ideas the starting point of musical composition. In contrast to this view, Feldman's closest composer friend, John Cage, represents the extreme aesthetic stand point of music being the expression or working out of an intellectual idea. In many instances, the entire content, meaning, form and interest of a piece by Cage is the intellectual idea and the subsequent aural events of the piece are almost incidental and uninteresting by comparison. Glass is the opposite end of this spectrum. This is not to say that Glass's music is totally abstract, without influence from the world of ideas - the influences and musical concerns, however simple, are obvious, unconcealed and undigested. But these never become the point of music, never affect its fundamental style, are never inherent in the intrinsic "meaning" of the notes, and by extension of the total work. For all its unmistakable character and single minded hammering, his music is astonishingly bland and unsuggestive psychologically and intellectually - there's no sense of him ever trying to depict striving, seduction, sorrowing, or any other abstract noun that music has the power to so strongly suggest in us. 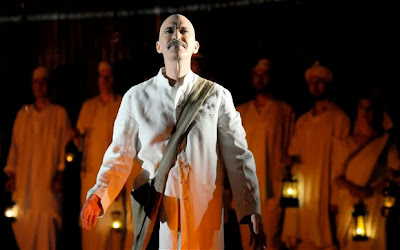 Rather than intellectual ideas then, his music comes at us as an exploration and celebration of the most fundamental aspects of music. Chief amongst these is the diatonic chord. Harmonic tension and therefore progression exists only as an insubstantial ghost in the background of this music, as does tonal development and therefore traditional structure. Diatonic (usually triadic) chords become abstracted entities, entirely non functional as harmony, repeated and expanded to such lengths as to allow us to fully hear every aspect of them. There is no rhythmic interest in the sense that rhythm might be explored as an expressive parameter (as it is by say Stravinsky, Messiaen or Reich), but the music's pulsating, throbbing repetition is celebrated for its particular feeling, the pleasure of it simple yet powerful. Pop music in all its guises and varieties represents a superb vindication of the power and overwhelming popularity of the physical and sexual power of strong regular pulse. 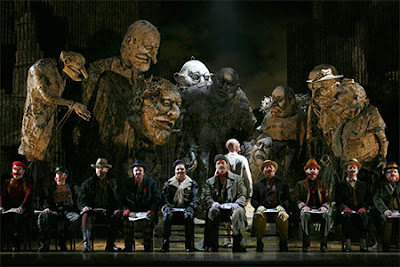 Part of the problem of Glass's oeuvre is that his music is performed in the context of classical music venues, when in actual fact its aesthetic is closer in technique, intent and effect to club music than it is to anything in the canon of classical music (Western Art music, call it what you will). If it doesn't on its own induce a mind transcendent ecstasy in every listener, then it might be heard to best effect, or "make most sense" as it were, in the context of taking ecstasy, MDMA or a favourite mind altering narcotic. This is not a glib suggestion, nor a slight on the music, merely a statement of fact deriving from the aspects discussed above as well as from the music's origins in non western trance music, its similarity to western "trance" music (not just the specific genre that that implies), and the cultural context of 60s/70s liberal America in which his style crystallised.

Onto the opera at hand. It's a bit of a misnomer to call Satyagraha an opera. There's an orchestra, choir and soloists in costume surrounded by a set, but other than the physical facts of what lies in front of the audience, there are few things that link the experience of seeing it to what we expect from standard operatic fair. There is no plot as such, no dialogue, no characterisation. One would be hard pressed to tell that the singer who portrays Ghandi was Ghandi were it not for the trademark glasses and skimpy white get up. Instead the work proceeds as a series of tableaux each based around a single intellectual and musical idea. The audience is invited to fill these vast, empty spaces with what they want or need from the music - listening becomes an act of collaboration. In a Wagner opera, everything is given to us - plot, character, subject are all embodied in the music, a meaning attached to and inherent in every musical phrase - to large extent his operas come pre-interpreted for us. The audience must submit themselves to it and accept what they are presented with if they are to experience the work in the fullest way possible. Debussy, the reluctant Wagnerian, in Pelléas et Mélisande produced an opera that is a distillation of etiolation, thinness, emptiness, which requires the exact opposite of its audience. We need to be fully engaged with ourselves when we watch his opera and fill in the blanks with our own meanings, psychology, in a word, ourselves. According to Robin Holloway, it is this that gives this frigid work its elusive but strangely moving character. Perhaps surprisingly, the Dionysian Glass is an ally of Debussy in this moving a step further along this road towards poverty of material, by providing only a title and vaguest of subject matters - there is no dramatic situation, character - and almost no musical content*. Glass does not even provide a language we can hold onto. The libretto is in Sanskrit, and as it was composed in 1980, before the age of surtitles, we can safely assume that Glass isn't particularly concerned about whether we understand the words or not, since Sanskrit is hardly common currency in the venues the opera is likely to be performed in.** Effectively, the listener is given carte blanche to imagine anything they like whilst watching the opera, and since the music is almost devoid of surface interest we are given the space and time to reflect on the images we are presented with, and the broad subject matter at hand. 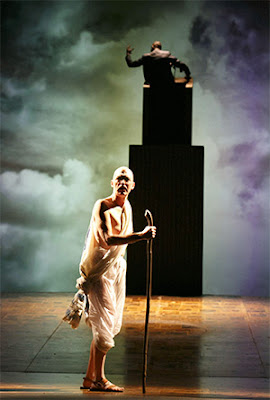 All this makes the opera either a gift or a real challenge for a director, depending on one's point of view. The director becomes as much a collaborator as an interpreter. Director Phelim McDermott has worked with Designer Julian Crouch to create a compelling version of the piece, visually strong yet ambiguous enough, and never pushing the music to do something which it can't support. Costumes are Edwardian and so of the "correct" period for the opera, but sets and action remain steadfastly symbolic, everyone moving in slow motion. There is no psychological action, and the text, projected into the set, is all aphoristic in character. Deriving from the Baghavad Gita, the text is sometimes put by Glass to embarrassingly jejune political use - the capitalists of Act II are a ludicrous caricature. Similarly the morality that the text espouses is all part of the horrendously repressive, socially controlling nature of the caste system that was a necessary principle for the founding of Hinduism. Abstract battle scenes are presented on stage with huge puppets, but the idea of non violent protest (which is part of the meaning of the word Satyagraha) isn't clearly presented. Figures emerge from sellotape and newspaper, the latter a recurrent motif of the show. One particularly memorable image is a recycling waterfall of newspaper (see top image above). The point is, none of these things have fixed meanings, but merely produce suggestions, things to contemplate as visual or symbolic phenomena. The final tableau is quite beautiful - a clouded sky, video projected, with a black man preaching from a great height to an imagined crowd with his back to us (presumably Martin Luther King rather than Malcolm X in the context of the word Satyagraha). The rising scalic figure that Ghandi sings is perhaps the work's most beautiful and hopeful musical idea. In a work of this size and sort, one can't avoid being bored occasionally, but it should be much more boring than it is here. I personally don't respond to Glass's music or ideas very strongly, so I didn't much enjoy the experience as a whole, but this is a very decent production of this piece.

The musical performance is basically good. For all its simplicity, this music is deceptively challenging to sing and play - the stamina required to execute identical music figures again and again (each iteration of course constantly inviting direct comparison to the last) and the presence of mind to count huge numbers of bars are challenges taken to excruciating extremes here. Alan Oke is mixed as Ghandi, clearly committed, but he took too long to warm up during his first scene, singing out of tune in both of his extended monologues. Intonation is even dicier for one of the sopranos, painfully flat in each successive repetition, ruining a couple of sequences, the singer apparently unable to hear or correct the problem***. Most of the cast sing accurately however, which is the most that can be asked of this music, eschewing as it does opportunities for expressive affekt. Conductor Stuart Stratford keeps things under control most of the time, and doesn't try to make the music more interesting via dynamic contrast or sharpening the aural surface - which is either a good or a bad thing depending on what you want! The orchestra do an astonishing job stamina wise, showing no evidence of tiring at all throughout the evening.

*Of course in aural effect, music more different than Debussy's fragrant, subtle, shimmering evanescence, and Glass's propulsive, vulgar, primary colour solidity is hard to imagine.
**Further evidence of this attitude: Ghandi in fact spoke English in South Africa where the "action" of the opera is "set" - Glass is not interested in representing history or characters here).
***cf. Michael Jackson in Santa Claus is Coming to Town or Anita Ward in Ring My Bell.