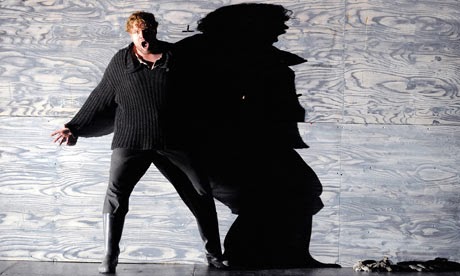 An odd production this. It isn't boring, but it flattens Britten's drama into a piece of caricature and grotesque theatre. Paul Steinberg's sets are semi abstracted with their cubist angles and lack of detail, but are traditional in their pictorial rather than symbolic intention. Director David Alden confusingly pitches this against psychologically abstracted physical direction. By "psychologically abstract" I mean that the physical characterisation and movement of the chorus and principals can't be consistently attributed to psychologically motivated people - instead we see the "sorts of things" these people might do, often in alienated, abstracted ways. Thus there's mass choreography ("old Joe has gone fishing" is a dance sequence), slow motion walking, stormy arm swaying and silly walks. The Borough doesn't seem like it is comprised of individuals, but instead is an abstract "wave" of hatred and mistrust. The social situations aren't intended to be literal depictions of events which can be confusing, and the lack of clarity is compounded in Act I by the lack of certainty about where the sea actually is. Eventually we work out that the crowd's gormless stares at the audience are meant to be seaward glances. The "characters" that the principals play (except for Peter and Ellen), fit in with this directorial style, but feel reductive and one dimensional to me, and the less scary for it. Auntie is the most interesting perhaps with her masculine pinstriped suits, cropped hair and cabaret manner, and the absurdist action in her brothel at the beginning of Act III comes as a surprise. Her 'nieces', often portrayed as loose women, are here cartoonish twin school girls, certainly mentally ill, who are fondled by the apothecary to no one's particular concern. A grim picture of the sexualisation of girls that the Daily Mail reading borough don't mind (and further, don't even see), whilst simultaneously screaming about the rumours of boys being abused. 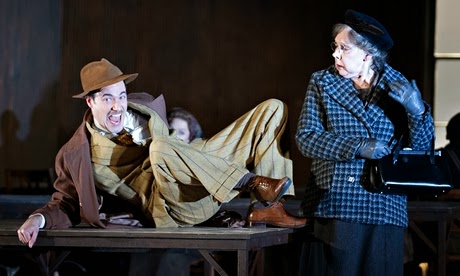 Ellen is not the brave, healing, mother figure that we have come to expect, nor is she Grimes's bridge to society. In fact she's almost the most solipsistic of the lot, responding fully only to invisible internal stimulus, which makes her repeated lapses into hopeless inaction seem nihilistic and selfish. In Act II she seems unperturbed by (the child) John's very obvious extreme psychological anguish. She is very moving as she enjoys the sunlight in the harbour, but then is coldly distant when she points out John's ripped shirt, which elicits from him a disturbingly protracted bout of demented scrabbling at his own neck and back. When she sees the bruise, instead of comfort she offers only a chilly lesson in the painful ways of the world. When Grimes appears she seems hopeful though soon lapses into despair, not unreasonably of course, but at an arbitrary moment, which again makes it about her. In Act III, her embroidery aria is delivered looking directly into the audience, another opportunity to drift into her own isolated thoughts. Balstrode attempts to make contact here, but he is well and truly ignored. Again, the apparently arbitrary moment of depressive doubt, once again in response to internal stimulus rather than an outside event, makes her quite unsympathetic. It's a take on the character that I haven't seen before, reinterpreting the dreamy warmth and nobility of Ellen's music as an alienated and egoistic escape from life. It didn't do it for me, because I like watching relationships on stage rather than alienated drifting around, and Ellen is sort of the linchpin of the piece in terms of the relationships contained in it, but it's an interesting critique of a character commonly seen as "good".

Grimes's misanthropy seems reasonably argued and comes from a place of surprisingly acute social sensitivity in the Prologue - he wants to silence rumours with a proper trial, because otherwise the fearsome Borough will not only continue to tell the stories, but elaborate on them, and the rumours will linger. His subsequent plans to escape his situation become ever more erratic and fantastical as he is increasingly ostracised from society. This production's picture of Grimes is closer to a traditional view of the character than is Ellen's, but the lack of social reality to his situation makes him a less interesting and complex figure than he usually is. Stuart Skelton is very impressive vocally in the role. His general bruskness fits the character well, but the spellbinding pianissimo that he started his great visionary aria "Now the Great Bear and Pleiades", held the otherwise noisy audience absolutely rapt for its entire duration. This happened again in the extraordinary mad scene, where Grimes's mind  thoughts flits and plays over the music of the entire opera, though now made uncanny by the lack of harmonic context. Occasionally, slight instability in the vibrato produced a few tense vocal moments, but perhaps this was first night nerves. Acting wise he did fine, but the direction provided scant opportunity for building a dramatic arc with his colleagues.

Elsa van den Heever's Ellen was unusual dramatically in the ways already mentioned, but vocally she provided a convincing portrait. Here voice in the upper register is shiningly full and very beautiful, but falls away in vibrancy of tone in the lower half of the voice. Rebecca de Pont Davies's rich voiced Auntie gets ever better as the evening goes on, and when she is joined by Heever, Mary Bevan, and Rhian Lois for the quartet "From the gutter" we get one of the highlights of the evening. Matthew Best's Mr. Swallow is vocally imposing of tone and character, though I couldn't fathom why his character had a lisp. Felicity Palmer is a delight as the steely voiced Mrs. Sedley, reacting with believable irritation at Ned Keene's piss staking sexual advances. Leigh Melrose and Timothy Robinson provide worst of the "character acting" as Ned and the reverend Horace Adams respectively, though I don't blame them for this, and both are vocally right for their parts. Iain Paterson's finely sung Balstrode rounds a vocally accomplished cast.

Edward Gardner draws some lovely playing from the ENO orchestra, and the score's softer beauties are his forte. He doesn't manage to inspire the energy and aggression of the faster, louder sections nearly so convincingly, the act II interlude for instance seeming wan and undernourished. There's a spot of wonderfully beautiful viola playing in Act II from the section principal, Amelie Roussel. The ENO chorus are on thrilling form.

The central theme of Peter Grimes, that of society against the individual, is terrifyingly presented by Britten because the victory of the Borough is so complete. The social glue, the thing that pulls this society of preening misfits together, is not a genuine belief in conservative values, but rather the hatred of and then destruction of a vulnerable and isolated individual. This is chilling. Grimes is a threat not because he is odd or violent (in actual fact all of the members of the society that we witness are extremely odd - threateningly eccentric, immoral, hypocritical, prurient, or drug addled, and we can only surmise that each of the members of the chorus are the same), but because he is unconcerned with and possibly simply unable to "keep up appearances". Something about him makes it impossible for people to feel neutral towards him. In some ways we know, by the rules of tragedy, that Grimes is doomed from the beginning. But Ellen's resistance, whether powerfully, or (as here) weakly presented, is also crushed, and her future seems pretty bleak. Is she next for this treatment from the Borough? One feels that this society will continue to prey on its weakest members until it has destroyed itself. An apocalyptic vision.