The Magic Flute at the Royal Academy of Music (Die Zauberflote)

What an enjoyable evening. I love hearing young singers, especially when you get to spot some real talent.

I reviewed it for Bachtrack. Read it here.

Stephen Barlow chooses to update the staging to the 1980s, with Sarastro as the charismatic head of a cultish organisation which is a mixture of Mormonism, Scientology and at the end a mass wedding of Moonies. He plays the piece for laughs which mostly works very well: it is genuinely very funny and makes light of the more ludicrous plot elements. The Queen of the Night becomes a power suited night club owner* hysterical with rage about her daughter's kidnap. Her three ladies are a kick-ass Charlie's Angels, and the three children attired like mini bouncers. Papageno sports a mullet, "catches birds" by photographing them coming out of clubs, and plays a Moog synthesizer; Tamino the prince is from Princeton university. It's a joyous evening, delineates the plot very effectively, doesn't detract from the music and it makes dramatic sense, though the spiritual message of the end is somewhat diminished by the fact that all have been inducted into a brainwashing cult.

It's unfair to be too harsh on young singers as they are all manifestly works in progress, so I decided to focus on the overwhelming positives.

I recently also heard Aoife Miskelly (here singing Pamina) in a Schubertiade evening at the Academy and was nowhere near as impressed - in the small room she sounded tweety and tense. But in the context of the theater she sounded just gorgeous, really special. Another reason why traditional auditions are a terrible way to judge singers. 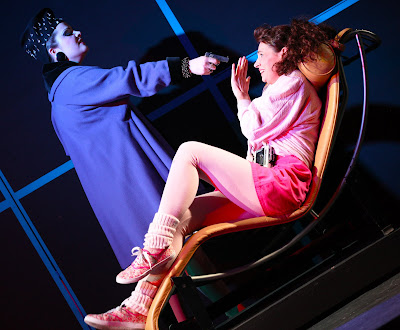 Ruth Jenkins is clearly already a star and I'm sure she'll be hired professionally as Donna Anna, Fiordiligi and even Konstanze very soon. There's a slightly worrying wobble in some of her high notes (not the very highest), but hopefully someone can help her with this. Such a joy to hear coloratura sung with such clarity and proper support! 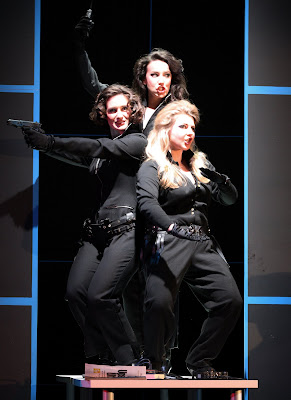