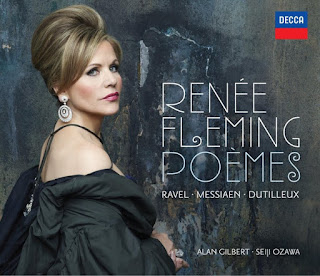 But first a bit of a gloss on Fleming and French music. The review starts in paragraph five.

I am an adoree of Fleming's voice and art - I have pretty much everything she's ever recorded and like or love most things, though am not totally without criticism (no singer is perfect). At some point I'll do a recording career retrospective of her, but for the time being, suffice it to say, that along with Callas, she is my favourite vocal artist of the recorded era.

Fleming has always said that she enjoys singing in French the most because of how it feels to sing with its resonance in the mask and particular tonal characteristics. Her previous Massenet recordings bear this out - the refulgent fullness and unbelievable beauty of her recordings of this repertoire show her to be completely in her element - the pure joy of singing is absolutely palpable in every phrase she sings in these operas. Manon and Thais are particularly challenging roles, requiring first and foremost an immaculate timbral beauty, very good support, flexibility and evenness in all three registers (they stay very low and go very high), effortless pianissimo singing, a lot of stamina and also a dramatic power in the climaxes. Fleming is maybe the only singer of the last twenty-five years who has done full justice to these roles - of the two other famous current Manons, Dessay does not have the low register or timbral beauty, and Netrebko lacks the requisite control and finesse.

And a live Manon:


Her other major french roles that she essayed were Micaëla in Carmen (which every young lyric soprano has surely sung), Charpentier's Louise and Marguerite in Gounod's Faust. She has recorded arias from all three. Louise she only did once in San Francisco, but dropped the role because the character was not interesting to her. It's available as a bootleg. Marguerite also didn't appeal to her - the character was too much of a victim. It's available to hear on the Met player. Although again both roles demand the utmost vocal finesse, ideal in some ways for Fleming, one suspects that she was slightly overparted in both roles - usually they are spinto territory. She did received rave reviews for both however.

Here's a live performance of the famous aria from Louise. The most perfect pianissimo singing since Caballé and just listen to that messa di voce at the end:


Why not Debussy's Pelléas et Mélisande? It's not a very glamorous role, but with her verbal acuity and beauty of tone one wonders whether it might have been an opportunity missed. Certainly her Debussy songs on her Night Songs disc are absolutely ravishing, particularly the Chansons de Bilitis where she captures the languid eroticism and sexual tension so perfectly.

So far we have only discussed 19th century French opera. This brings us to the current disc. No opera arias here, Fleming has chosen to record three French song cycles, all written after 1900. The first is Ravel's Shéhérazade, his first masterpiece, a fin-de-siecle, soft-porn evocation of the orient, replete with rippling chords, harmonies sweet and spiced, the orchestra a plush divan above which the liquid enchantments of the soprano's vocal line unfurl.

This piece would seem to be ideal for Fleming, who is a mistress of the yearning eroticism of this period of music - indeed she previously released an album devoted to just that. But Fleming no longer has the extraordinary vocal beauty she had a decade ago, or even five years ago, as is to be expected of a soprano of her age (she is now 53), and her top especially now sounds rather dry. We began to hear this in her two previous discs: a bit in her second Four Last Songs recording, and a bit more in the Verismo album, though both were still gorgeous. But here, it really is not as it once was. The low range at least is almost as rich as it ever was, her juicy chest register one of her specialities, though the notes don't quite come with as much force as before. For the first time in her career we hear occasional very mild pitch problems and an unevenness in the vibrato towards the end of a phrase when the breath is running out - again, aspects of singing which she was traditionally been virtually faultless in. (EDIT: this has just appeared on youtube: http://www.youtube.com/watch?v=Of8B8xhE-jI her singing the same piece in her prime. Unfortunately there's blips in the recording, but the difference in vocal quality is noticeable)

Fleming has sung this piece quite a few times in the last 5 years or so. It lies rather low and is often taken on by mezzos, and with its non extreme vocal demands one feels that Fleming will be singing this a lot in the coming years. For similar reasons I think we'll be getting quite a few Rückert-Lieder from her.

Things get better in the Messiaen. His Poemes pour Mi are rather early (composed four years into his first marriage), but sound "late" somehow - the skeletal harshness of the orchestration sounds like an etiolation of his middle period rather than a warm up to it, and to an extent the harmony sounds like a clichéed, by wrote, version of middle Messiaen rather than an exploration of his newly discovered harmonic palette. It's not one of his greatest works, though does contain portions of extraordinary beauty and intimacy. Traditionally this piece has been sung by dramatic sopranos, and it does really need a larger voice than Fleming's to do it full justice - the orchestration is rather heavy on the brass front for a start, and the declamation is often very dramatic. But the voice also needs to be focused and pure, which is where Fleming has the upper hand - especially in the more lyric Book II. Her wonderful legato comes into its own here - in L'Epouse the voice is smooth as satin and we almost hear the Fleming of old.


Finest of all are the Dutilleux selections. This recording of Le Temps L'horlage has in fact already been released in a very small run on an obscure in house label, so I have lived with it for a couple of years already. It's a recording of the world premiere performance of the full work that was originally broadcast on the radio. The piece was written for Fleming over a number of years because Dutilleux was and is an admirer of hers. According to wikipedia he said: "I constantly thought of her voice's character, of her power of lyrical expression".

Initially I have to say I didn't much like it, thinking it was very minor Dutilleux - I adore many of his earlier works (above all the two concertos and the string quartet) but this seemed to be saying nothing particularly new or extraordinary, and I didn't think that he had much talent for vocal writing. But the more I listened the more I realised how charming it is as a piece, and how beautiful some of the phrases really are - and since it was recorded in 2009, Fleming is in much better voice, especially her top. It's still less beautiful than her true prime, but certainly noticeably better than in the Ravel. The piece is largely what we've come to expect from Dutilleux - a shimmering, shifting, brooding impressionistic dreamscape reminiscent of the lushest and darkest aspects of Debussy and Ravel, but far less tonal, less permanent sounding, every bit as sensuous as these two at its frequent best. Le Masque is particularly beautiful with its string clusters and desolate muted brass, and Fleming's wide ranging vocal line floats, drifts and soars through the haze. The word setting is particularly beautiful here, and Fleming really savours the text and line. The more unsettled feel of Le Dernier Poeme, with its novel accordian, gives way to an interlude scored only for cellos and at the end harpsichord (the orchestra employed in this piece is very large). The final song Envirez-vous ("Get drunk") returns to the ravishing strangeness of Le Masque, but then wanders and jerks about, until the epic and spell binding climactic phrase: la vague, l'oiseau, l'horloge, vous repondront: "Il est 'l'heure de s'ennivrer" (...and the wind, the wave, the bird, the clock will tell you: "it's time to get drunk!") which sails and flies before the open eyed wonder and humour of the end.

Also included are two early Sonnets which were specially orchestrated for this album, and the second is just gorgeous. Nice to find an unknown jewel like this in an album, and Fleming, being a stickler for obscure repertoire seems to make sure that each album has one.

On this disc orchestral support is very fine, the darkly shifting tissues of sound of the new Dutilleux artfully conjured by Seiji Ozawa and the Orchestre National de France. Alan Gilbert is almost as good in the rest of the disc with Orchestra Philharmonique de France, though the sound might not have recessed the orchestra quite so much. But it all sounds authentic and the orchestra is more than capable of following Fleming's lead in expressively milking every last languorous phrase.


Fleming's reviews have not started mentioning the lessening of beauty of The Beautiful Voice yet, so maybe people are still hearing what they want to hear, but sadly for those of us who know and love this wonderful instrument of Fleming's, she is now in the autumn of her prime. I'll be seeing her sing the Dutilleux and the Ravel with Gergiev and the LSO in the summer.
at 20:50