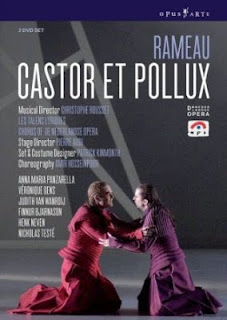 
Castor et Pollux is one of my favourite Rameau operas - the fascinating story of brotherly love and the exciting beauty of the music make it an unusual and special piece. Unfortunately this production completely misses the mark and is in no way recommendable.

This opera is about tortured emotions, and the conflict between the desire for love and doing the right thing. Unfortunately director Pierre Audi and designer Patrick Kinmouth conspire to strip all characters of any individuality or personality to the extent where it's hard to understand what is going on or what the motivation for the character's actions are. The aesthetic is some sort of sci-fi future where both men and women are garbed almost identically in badly cut dresses, everyone has identical braided hair, and most people wear eyeliner, eyeshadow and lipgloss. Status and personality are not expressed through visual appearance. Sets look equally tacky and contrived and as so often with sci-fi are derived from a previous era of design but without its logic or coherence (in this case very vaguely Bauhaus). The only props are white cubes, and the only changes of scene are effected through lighting, usually with characters not even leaving the stage. The chorus sings from offstage throughout, and dancers act out the words.

Musically things fare slightly better. All of the cast sing perfectly well, though there's nothing to get truly excited about here. Véronique Gens is the exception and manages to imbue her music with expression, but it's difficult to really see her as a big adversary when she's so placid like the rest of them, and dressed identically. The orchestra make a decent sound, though there's a lack of contrast in colour and timbre - Rameau's operas thrive on their exciting changes between soughing laments, energetic bombast and edgy virtuosity. Probably the orchestra is just too large to give the music the precision it needs (though a better conductor at the helm would surely help.)


Rameau was constantly revising his operas, and this performances uses the 1754 version rather than the original 1737 version. The original is a much more interesting piece, and the update cuts many of the most beautiful and original passages of the first version. Sadly this is a tendency with Rameau's revisions - to tone things down to please an ever less adventurous public.

Rameau is still a cause, and needs passionate advocacy to cement his place in the repertoire - outside of France his genius is still mostly appreciated by connoisseurs and far from widely accepted. Sadly this DVD is so boring and misguided that it will win him few new fans. Get the William Christie CD with Les Arts Florissants instead.