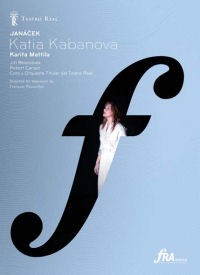 
As with all of Janacek's mature operas, Katya Kabanova is a desert island score for me, one of the most thrilling, beautiful and moving of all operas. Of Janacek's operas it has the most extreme emotional contrasts and fastest pacing, the most opulently lyrical music and is also in a strange way the most traditional - the story is centred on a straight forward love affair, the diva gets two big scenas one of which is a mad scene, there's an extended  love duet in the middle act and the diva also dies in the end. As ever though, Janacek twists these conventional operatic plot elements to his own ends and produces something stranger, more psychologically harrowing, truthful and therefore more affecting and unsettling (at least for me) than most of his celebrated 19th century forebears could muster. The harmonic language too seems familiar and reassuringly tonal, but what Janacek does with his quite traditional materials is extraordinarily original, avoiding cliché and convention with visionary conviction and almost wilful abandon. This might be said of any of Janacek's works of the final 20 years of his life, and his strangeness, intensity and the magnitude of his achievement only intensified with age: though I love almost everything in his output from Jenufa onwards, his most undeniably significant works all derive from his last decade, the very last being his most singularly original and unbeholden creations of all (From the House of the Dead and the Second String Quartet). One can only wonder at what might have lain ahead had he lived longer.


Carsen's staging (with sets by Patrick Kinmonth) is predictably minimalist, visually strong, and beautiful. The whole stage is flooded and the surrounding flat walls are atmospherically lit to look like huge open expanses of sky. The effect is very similar to his famous Met Eugene Onegin. The difference here is that the water is reflective, and when the stage lights are shining from the front, the whole scene is reflected/projected onto the back with ghostly distortions. The ripples in the water become visible as wave fronts, and this is beautifully used by Katya to send a kiss across the water to Boris in the last act.

Characters walk around on wooden pallets which are reorganised by lots of silent Katya look alikes between scenes (multiples of the main character is a bit of a regietheatre cliché and I didn't think it was particularly illuminating here, and served mainly the exigencies of varying the stage's layout.) This really limits the movement of all characters and though it might have been fine in the theatre, up close it puts too many restraints on the range of physical actions the characters can make. The aim I think is to give a feeling of Katya's claustrophobic circumstances, though the wide open sets (no walls!) don't communicate this psychologically at all. The river Volga is an important element of the plot in Katya Kabanova, but in this instance, the admittedly arresting style of Carsen's choice takes precedent over the substance of what it achieves dramatically, to the detriment of the physical staging I think. The crowd scenes in Act 3, so brief, but also so key to the work's psychology are mishandled and confused and seem out of place dramatically. Overall it feels like there is a lot of depth in the work that remains untapped.

Just as with his Onegin, the focus then is meant to be squarely on the intimacy of the drama and subtle character interactions. Katya is a dreamy, girlish, impulsive, but radiantly spiritual character: she's the first of Janacek's representations of his beloved Kamila Stösslová and therefore seems to be an incarnation of the feminine divine as seen by Janacek's heart and soul (much as Arabella was for Strauss a decade later). Carsen doesn't attempt anything too radical here, but I'm not sure Karita Mattila is the ideal singing actress for this traditional view of the role. She is a rather statuesque lady, handsome and strange looking, though here unflatteringly dressed in girlish clothes that don't at all suit her frame, and as so often for this artist not at all helped by her make up (why are some artists always served well in this regard, and some almost never?). Despite these things she does a surprisingly good job of being convincingly young and girlish, but her approach also seems a bit generalised here, not responding word by word to the text with the dramatic intention not always completely clear. Sometimes her intensity can seem ill-focused as a result. The voice itself, despite being past its golden prime, is timbrally beautiful especially in the middle register, though I wish there were a little more sense of line to provide continuity to Janacek's sometimes fractured word setting. Still it's obvious that she's a singer of major standing and this is a well above average portrayal.

The rest of the cast are not this starry and generally are decent, though not of the highest quality. Natascha Petrinsky as Varvara has the demeanour and charm of a soubrette, contrasting well (perhaps too well) with Mattila's less natural, more ethereal stage deportment. Timbrally the voice is a little dark, and certainly the wide, slow vibrato, while controlled, doesn't speak to the character's youthful exuberance. Gordon Gietz is a charming Vana, and Miroslav Dvorsky provides a very decently sung Boris, both matching their partners in their respective love duets. Dalia Schaechter's is a weak link dramatically, failing to convince as the hard as nails matriarch Kabanicha, and though her low notes are strong, the vocal contribution is none too interesting either.

Jiří Bělohlávek's gives a good reading of the score, which rarely however rises to the exceptional. There is much that is lovely, though one wishes that he'd lavish more attention on the details and take more time to work out the mechanics of Janacek's quirky orchestration and expert ear for sonority. Rhythmically too, things could be tighter.

Perhaps (or rather almost certainly) I am spoiled by Mackerras and the Vienna Philharmonic who play not only with the expected sumptuous sound and fidelity to the score, but also with enormous character and atmosphere. His readings with that orchestra of the major operas set the gold standard for these wonderful works, and shine a beacon for Janacek's genius, when his works are still all too often inexpertly conducted.