Medea at the ENO

This is the first full staging of Charpentier's Médée of 1693 in the UK, and with the ENO's Castor and Pollux in 2011 and Glyndebourne's Hippolyte et Aricie this summer let's hope that French baroque opera (or for me more specifically and more ardently, let's hope Rameau) is here to stay on the major UK stages. 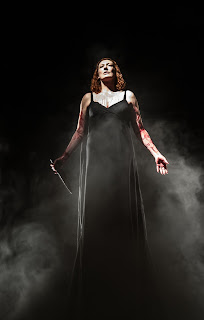 This is one of the best things the ENO have done in a while. Charpentier's score turns out to be tuneful, dramatically concise, beautifully orchestrated, occasionally inspired and fully worth the effort lavished on it. I say tuneful, but don't expect a Handel opera with 15 second bouts of action-recitative followed by a 7 minute aria exploring the character's emotional reaction. This is much more fleet paced with very little repetition of the words (which can make Act I and II a little hard to follow as there's so much pretext that is assumed). As a result, musically it unfolds mainly in a sort of lyrical arioso style, with true arias mostly saved for the extensive ballet sequences which form such an important part of French Baroque opera, but which also at least give them a more explicit narrative function than we might find in some Rameau operas. Medea herself doesn't get a proper aria until Act III, and what emerges is quite beautiful - we get piled on dissonances and suspensions in a muted string haze all slightly awkwardly arrayed, with a plangently understated melodic line that Sarah Connolly shapes wonders with. There is a similarly affecting aria for Creon when he goes mad, and the brief orchestral depiction of madness on flickering strings is quite brilliant. Elsewhere the score sometimes sags - Medea's invocation that brings up daemons to help her is disappointingly jolly and light - this is just the sort of thing that Rameau excelled at half a century later.

McVicar updates the opera to WWII without worrying too much about finding literal analogues for the situation, and nor does he try to transform the supernatural elements of the plot with psychologising. It works well because McVicar focuses on the story telling with his unerring directness and detail, and of course as he's gradually taken on the role of a modern Zeffirelli for the world's biggest opera houses, in the sense that he's unafraid of sensation and spectacle, he is not averse to throwing in the kitchen sink for the dance entertainments. Here we get a glittery pink plane with rotating propeller, ridden on by a camp cupid. Yep. There are also ludicrously camp army dances, and drag daemons, which completely clash with the style of the period being evoked, but somehow it doesn't jar too much because McVicar has his tongue firmly in his cheek, and clearly just wants to delight. Fatuous moralising is not an interest of his. Elsewhere, the main thrust of the story between Medea, Creon, Jason and Creusa is sensitively told in an uncluttered, unsentimental way, helped by the Christopher Cowell's translation which is one of the best I've heard for the ENO.


Visually this is a very beautiful show. The set is a corner view into a grand 18th century looking room, and furniture is brought in and out to suit the needs of each scene. What makes it so special though is the mirrored floor which provides lighting designer Paule Constable with endless opportunities for subtle and unusual effects that imbue the piece with a soft beauty, intimacy and coruscating glamour. Often the gilt furniture is lit from below, and feels like it's glowing from within, and during dance sequences the dancers float in double above the action in an extraordinarily beautiful way. I have loved Constable's lighting designs before for the McVicar ROH Figaro and Glyndebourne Meistersinger, though have also found them wanting occasionally (e.g. the Glyndebourne Vixen) but overall he seems to be one of the best people around for this stuff.

The cast is extremely good, one of the best I've ever heard at the ENO. By every metric Sarah Connolly's performance is quite brilliant: dramatically committed, textually deft and vocally gorgeous. It's such a generous and full sound that even in the sad acoustics of the Coliseum, the lovely legato, shining timbre and rich vocal colours come through with ease. So much better for her than the recent Wagner excursion at ROH, which was dramatically as fine as ever, but vocally not quite right. I can't wait for her Phèdre at Glyndebourne this summer. Occasionally the timbre is uncannily similar to Baker for a few notes, and then fully Connolly again, and Lorraine Hunt Lieberson in the more recent past also bears a strong resemblance. Brindley Sherratt is in superb voice with a Tomlinson like resonance and timbre. When is he going to sing Gurnamenz/Hunding/Sachs at ROH? Am I the only one who thinks he's fantastic? He is.


Katherine Manley is a new name for me, but what a gorgeously gleaming lyric voice she revealed with a superb legato, exquisite dynamic control and even sound across the range. It's the sort of voice that I think everyone *thinks* Sophie Bevan has (based on casting). Manley seems to do loads of Baroque stuff, but she sings properly (support, vibrato wise etc.) and is quite special. She moves very naturally onstage and is mostly a good actress, though her death was a little artificial and disappointing staid (McVicar surely as much to blame). Sophie, Pamina and Zdenka are surely roles to hear her in soon (her website is infuriatingly scant on information), but this is a voice with a lot of bloom and firm roots, so I could see Tatyana, Figaro Countess, Manon, Liu, Rusalka, Arabella and Marschallin in the future as well as big Handel roles too.


Roderick Williams is also in lovely voice as Orontes, though overacts to such a degree that he is difficult to take seriously on stage. Still, he's surely one of the best English lyric baritones around. Jeffrey Francis is also dramatically challenged but seems underengaged, and though he doesn't struggle vocally, it's just not quite as beautiful a sound as any of the other four leads. Smaller parts revealed no particularly notable singing.

The orchestral playing is almost faultless and conductor Christian Curnyn provides superb advocacy for the score, falling just short of the undisputed twin kings in this repertoire (Christie and Minkowski) but he's certainly one to watch. If slightly greater attention had been paid to the all important expressive French ornamentation I wouldn't have had a criticism.


Two (2) chairs are thrown. Think I'm going to start documenting this at the end of every review.
at 14:42