English Touring Opera's second opera this season is extremely ambitious. General director James Conway has selected Simon Boccanegra, his first ever Verdi, but a good one for the ETO to do because of its intimacy, non outrageous vocal requirements and the fact that it's one of Verdi's finest works in this reviewer's opinion. The very complex story is brought easily into focus by Conway who doesn't get bogged down in the specifics of the politics and focuses on what Verdi is really most interested in: the human interactions and moments of very personal emotion. The endless criticising of Verdi's plots is a tiresome red herring, because they're all so clearly designed to give Verdi what he wants and needs to write his best music. The period is updated to post war Italy for the Prologue, a period of political chaos in the country, which places the rest of the action in the early 1970s. Never is there a conflict between text and interpretation - it's refreshing in fact not to have the Doge encumbered by his traditional robes/cassock/man-dress. 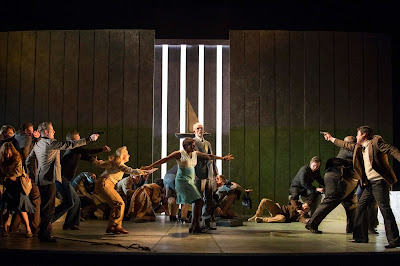 Simon Boccanegra is one of Verdi's most musically interesting and rewarding works despite containing fewer obvious hit tunes than the more popular operas in his oeuvre. The centre of gravity of the vocal writing is very low indeed - two basses, two baritones, a tenor and a soprano are the leads - and this darkness is matched in the glowering opacity of the beautiful orchestral writing - Verdi finds endless dark hues and inky depths in his orchestration and the piece feels unusually integrated and all of a whole as a result - it's as if he tried in this opera to produce a study in dark colours. Samal Blak's simple and austere designs work well and reflect both score and the nautical references in the text without ever becoming too literal - a much better offering here from him than for yesterday's Cosi.

Craig Smith's Simon Boccanegra is vocally quite brilliant, tireless, full, and heartbreaking in the finale of Act 3  where his endlessly supported pianos are searingly pained and tender. Acting wise he is unfortunately less convincing - his body language does not read as that of a leader, and his actions contain little conviction. Charne Rochford's Adorno is also awkwardly acted and though secure vocally, the voice becomes strident and metallic in the upper half of the voice. Grant Doyle's Paulo is the cast's best actor and he's very, very good vocally too in this smallish but important villain role. Keel Watson sounded strained in the Prologue as Fiesco and continued to sing on heroically through a coughing fit - clearly something was awry. He was however much more secure in the second half and vocally excellent. His massive frame made him an imposing nemesis for Boccanegra but unfortunately also limited his ability to move effectively on stage. 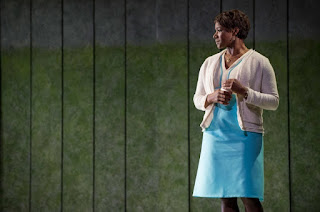 Many people will be most curious about up and coming soprano Elizabeth Llewellyn's debut in the beautiful role of Amelia which is at the top end of lyric repertoire and is entering the spinto territory. Hearing her "up close" in the Hackney Empire revealed things that I couldn't hear during her recent ENO Micaelas. The voice has a very smoky/husky lower register, dark middle range and incisive, full bodied top. The vibrato I find quite slow and wide for her voice category, but overall it is a sound of some beauty. The viscosity and density of the voice suggests that more spinto repertoire awaits, but it doesn't always feel fully in control yet - diminuendos aren't smooth and just cut out to off the breath singing, and occasionally a note doesn't sound fully engaged or supported until a quarter of a second into the note. The contrast between the smooth top and husky lower middle voice and chest voice gives the voice a raw edge which some will like, but to me it suggests raw potential that is yet to be fully capitalised on. She's still at the very early stages of her career so I look forward to seeing her continue to develop. Acting wise she is not very fluent either and seems inhibited in her interaction with her father and with Adorno, her lover. As mentioned already though, her two colleagues also had issues in this regard, and it was the only thing that marred the evening for me. The beautiful and important scene in which Boccanegra finds his long lost daughter is an unfortunate casualty.


Overall though this is a good evening of opera, with great musical rewards and the emotional pay off in Act 3 is overwhelming. The ETO's orchestra continue to go from strength to strength and are even better in conductor Michael Rosewell's hands than they were in their already impressive showing in yesterday's Cosi. The orchestral sound is simply magnificent for a band of this size, yielding nothing to the ROH orchestra (who will play the opera this summer), the strings' richness and fullness belying their small numbers and the wind and brass blending beautifully and never overpowering them. The sense of ensemble is excellent. What more can you ask for?