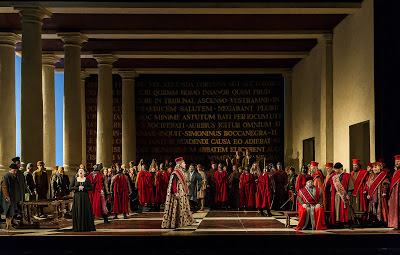 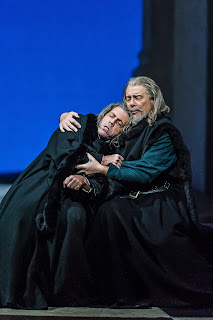 Now on its nth revival, Elijah Moshinsky is back to direct his production of Simon Boccanegra, and his presence keeps things fresh enough that we don't feel that this is just a dutiful discharge of a repertory piece. The staging is remarkably similar to his Otello (last seen at the ROH last season) in terms of sets, costumes, lighting (all ultra grand, ultra traditional, but meticulously avoiding the gaudy or kitsch - big pillars, marble floors, wooden tables, clear skies) and even  draws comparison in the physical direction in a few scenes, but he nevertheless manages to capture the grandeur and scope of this peculiar and troublesome opera and can draw a line through its dramatic convolutions where many others have faltered. As ever with Verdi, it's the human drama, those moments of intense release, that justify (and are a result of) the contrived windings of the plot; Moshinsky knows this, paring things down to their essentials at these moments and letting the music and text do its thing. Thus, the final tender reconciliation between the two old men, redemption and forgiveness after a lifetime of rivalry, simply staged with them leaning into one another in tender embrace, is far more moving than one usually encounters, because the dramatic groundwork has been meticulously laid, even if we didn't quite follow it fully as it was happening. Moshinsky takes Verdi at his word, trying to uncover the nuances in the text, never reinterpreting or re-imagining. Traditionalists will love it, others will find it frustratingly square. It does heavily rely on having a cast that act with conviction and subtlety which can't always be guaranteed.


The cast was decent I thought, though everyone involved took a while to warm up both vocally and dramatically. Most troublesome for me was Thomas Hampson as Simon Boccanegra. Technically he can more than sing the role and he's loud enough to make an impact in the role; dramatically speaking he also does a very reasonable job. To complain about singing of this standard would seem to be cavilling, but his portrayal ends up being less than the sum of its parts. There's something so careful and mannered about his singing, the delivery of the text very artificial and cerebral without penetrating the heart of the matter. His dynamic range is very wide, his control admirable, but the timbre is no longer very attractive, and the legato is studied rather than limpid. Somehow the technical mastery is being substituted for heartfelt interpretation or genuine response to the music  - we never glimpse the "soul of the character" as Gerald Finley so beautifully puts it in this article. Gerald Finley makes an interesting point of comparison actually because he is superficially quite similar (age, approach, repertoire, level of achievement), but is by far the more interesting artist because he can live the part. There are recordings of Hampson's from the 1990's which I truly love - mostly in song repertoire it has to be said - but this was a disappointing showing.

Hibla Gerzmava will be a very appealing Amelia for all those who like Joyce Didonato - the hallmarks of both voices can be eerily similar - the silvery sound, technical security, the very fast, brittle vibrato in the fluttery high register, the breathy pointing of the line - though Gerzmava has a gentler, more rounded middle register, and a less developed lower voice. Like DiDonato too, the intonation occasionally lapses in high phrases. An acquired taste, though I liked her considerably more as Donna Anna in last season's Don Giovanni. Her acting is never more than acceptable. More interesting was the young tenor Russell Thomas as Adorno, a new voice for me, who managed to distinguish himself amongst his far more famous colleagues. Initially I thought he was overparted, but he soon warmed up and produced some truly golden phrases. He's not quite the finished article, but the legato is exceptionally good, really wonderful to hear, he is able to colour the voice, and nothing even hints at strain. What I thought was particularly impressive is that he is able to make the musical line actually clearly express an emotion, his high notes particularly notable in this regard, always bursting with feeling, rather than mere opportunities for display. I'm not sure this can be taught - it's both an attitudinal thing and inherent to the timbre of the voice, though of course is unthinkable separated from his excellent technique (c.f. the dazzling Juan Diego Florez, who can sing anything, but expresses nothing). Acting wise, Thomas is passionate, but very inwardly focused, the contracted posture and narrowed eyes, indicative of the whole approach. In his last scene he does connect more with the others on stage at least which is promising because it means that this aspect of his stage personality already shows signs of the possibility of improvement. Overall though this is a very promising talent indeed, and a great début.


Fiesco is not quite the dream matching of role and singer for Ferruccio Furlanetto that King Philip II was in Don Carlos, but he was wonderful in the second act, managing the transition into old age superbly, as Hampson also did. A class act. I've found Dimitri Platanias dramatically null in previous Verdi productions, so it was pleasant to see him on more engaging dramatic form here as Paolo. Vocally he was surprisingly variable throughout the evening ranging from totally on top of the music, to struggling to project it with enough force, luckily tending more towards the former.


Pappano lead a lushly solid performance in the pit, clearly relishing the dark sonorities of Verdi's score. Occasionally I wished the textures had been more finely differentiated, but this was a satisfying reading, and the orchestra were on good form. Overall Moshinsky and Pappano hold this evening together and make it worth seeing for Verdi admirers.