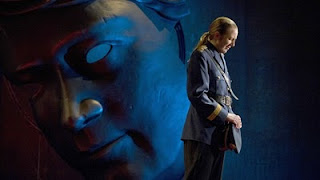 Mozart's last opera is problematic because it's patently so much worse than the four towering masterpieces that preceed it. The clichées for once are true - The secco recitatives are for the most part dull (the work of another hand), the arias only intermittently inspired. It has a curious atmosphere of simplicity, and a certain reserve that seems at once befitting of it's old fashioned seria style, and not quite enough to make the drama really live. Although the situations presented in the opera are in principle quite interesting, the libretto itself is really very plain (occasionally ridiculous, usually with regard to Tito's much put upon goodness), all the characters except Vitellia fairly simple and the action badly paced. The second act particularly drags - one just wishes that each of the scenes had been cut in half, so emminently and easily achievable since all are so longwinded and repetitive. Many people nowadays proclaim it as an unfairly neglected masterpiece, and of course there are moments of brilliance, a few arias that delight (none thrill) but however hard I try to convince myself that this is a hidden gem, the feeling of etiolation and exhausted churning in Mozart's music is hard to stave off. Whether the fundamental plainness and classical reserve of the score can truly be chalked up to a stylistic decision on Mozart's part remains very questionable, especially when one returns to the endless vitality, depth and extraordinary beauty of the "big four". 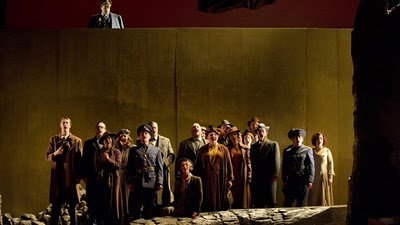 The ETOs new production sets the action around war time (who is Tito meant to represent amongst European leaders of that era though?!) which has been done before with this opera, and at least rescues it from the distancing effect of togas and spears - we need all the help we can get if we are to identify with these characters. The staging is simple and fairly static, and seems apt for the music - bizarre then that the ETO would so completely mischaracterise the piece in their publicity for the show. They don't manage to ameliorate the langours, but moments in the score do emerge with an understated poignance, particularly Tito's monologue on the travails and pains of leadership, and Vitellia's final monologue which verges on the heartbreaking (again perhaps it's good that it doesn't go all the way, as there isn't any weepiness in the music). I'm struggling for things to say - basically as a whole it's fine, but hardly revelatory. It's sung in English which takes a long time to adjust to. I really don't see the need for this when there is not one, but two sets of surtitles bookending the stage.

The singing was mostly of a very high standard indeed and the intimate scale of the Hackney Empire means that every word and nuance can be heard with clarity and precision. The diminuative Mark Wilde made an ideal Tito, vocally as sweet and pliant as his character. Only a couple of times did he seem overstretched during the climaxes and the coloratura required in his act two aria just wasn't in place, but the timbre and demeanour seemed just right. Gillian Ramm as Vitellia also convinced - both her arch manipulativeness in the first act and touching contrition in the second were made convincing by her acting. The voice is really quite beautiful, but rarely blooms as fully as you want it to and feel that it probably could. Julia Riley, Rhona McKail, Charlotte Stevenson and Philip Spendley are all good vocally and do the best they can with their more one dimensional characters. If only the music they had to sing was a touch more inspired!