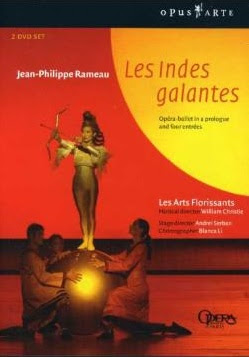 After Hippolyte et Aricie, Rameau's second foray into opera Les Indes galantes might come as a shock - the intimacy, incredible drama and newness of the previous opera is eschewed in favour of stock situations and divertissement. But Les Indes galantes is an opéra-ballet rather than a Tragédie en musique, and therefore is a much lighter, frothier affair, with the focus more firmly on ballet than on singing.  This shift of focus and also the shift of tone prevents it from being one of my more favourite Rameau operas though there's plenty to enjoy for those who like this music. (Though I love numbers here and there of all Rameau's operas, my favourites as total entities are largely the five Tragédies en musique.)

It is difficult to be an opera lover and not have at least some taste for the Camp aesthetic. I for my part identify with Susan Sontag's position in her extraordinarily brilliant essay Notes on Camp. As she did, I admit "a sharp conflict in my own sensibility. I am strongly drawn to Camp, and almost as strongly offended by it." There are situations where I like it, and some where I don't; as mentioned in the essay, as a general rule, naïve Camp is usually more satisfying than "camping" aka deliberate Camp. (As an aside, I cannot recommend the essay enough, one of my favourite essays ever. I wish I had written it.)


Everyone will have their own internal standards and sensibilities on this issue, even if they have not yet been fully considered and verbalised, so mileage will vary on how much each viewer will enjoy this production. For me, Andrei Serban's production crosses the line into camping so far that I find it difficult to enjoy. It's sort of fun moment by moment, but there's a joyless superficiality and denial of the Spirit in pointing out obvious absurdities and avoiding true emotion if Camp can be substituted, which is what this production tends heavily towards. It's also difficult to sustain an audience's interest over a period of music this long if their emotions are not engaged. As a result, for me at least, the whole thing feels prolix and uninvolving. Baroque opera suffers hugely from these sort of productions because broadly, what they offer as drama usually is the endless emotional contortions that surround romantic love and its denial. Rameau can come so close to Camp as it is - the powdered ultra decadence of the Ancien Régime is often invoked in less musically and lyrically inspired passages, where means seem to so far outstrip the ends that it becomes difficult to take it seriously. Camp is just around the corner. For me, the solution to make it viable as a piece of stagecraft is not to turn it into a joke, basically because the joke isn't funny enough. I don't mind directors being what some might call "disrespectful" to a piece if ultimately it deepens our appreciation of the artwork, but an ultra decadent panto without the smut or jokes pretty quickly becomes a bit of an inflated bore rather than a guilty delight.

Perversely, part of the problem may be that this production doesn't go far enough. If you're going to do it, make a real meal of it! The bright primary colours, twee costumes and set pieces, and panto acting do make it ultra stylised, artificial and sort of fabulous, but it doesn't evince the overstuffed cavern of delights that it's aiming for because the ideas are a bit literal and could be more flamboyant, subversive and decadent. This approach would be truer to Rameau in a way, because he was the ne plus ultra of these things in his time - but we need to feel this now, with our modern sensibilities, ideas and standards, if it's going to work on that level.


The Prologue and Act I Le Turc généreux are the worst offenders for camping design wise, and the the singers completely fail to engage with their characters (either because of the alienating production, or because they've been explicitly told to camp it up). Act II, Les Incas du Perou is stronger visually, and takes itself more seriously, at least for the centrepiece, a stirring mass invocation to the gods followed by a Rameau staple, a lightning and thunder/natural disaster scene. It helps also that the music is more interesting and varied in this act. The resolution though is let down again by poor attention to detail in the acting, and the singers revert to rather uninvolved, static declamation. Act III Les Fleurs we are back to panto, and in Act IV Les Sauvages we get some mildly offensive, but mostly just very bad choreography, which throughout has been of very variable quality.

The cast is entirely serviceable - all sing with immaculate intonation and with meticulous attention to proper Ramistian style. But Christie seems to favour very very light voices in this repertoire, and I wish he would work with slightly bigger voices with more colouristic options. In studio recordings they can sound beautiful, but already on DVD you can hear that they are struggling to fill the huge modern day opera houses that are staging these works. Not one singer has a strong low register here, particularly an issue for the women as so much of Rameau's writing sits relatively low. The singers of that era must have had approximately the same distribution of vocal weights as today, and many parts are not very florid, so I somehow doubt that Rameau would only have utilised soubrettes and light tenors and spiel-baritones.

Richard Croft stands out as the disguised prince Tacmas in Act III, with some gorgeous lyrical singing in the quartet, and a quite lovely falsetto before he goes into his joke female voice. Patricia Petibon also produces some very nice sounds as Zima in Act IV, though is completely over the top acting wise. A very young Danielle de Niese already shows huge promise at 24 as Hébé in the Prologue, easily singing as well as her respected co-stars - you realise that it's not just her stage presence that is dazzling, but that the voice has real star quality, particularly the upper register which already is fuller and more exciting than any of the other female principles. The more I hear of her live, the more impressed I am - OK, she's not one of the Great Voices, but it's still a very decent voice, she is a charming actress, can sing with sensitivity to the text, is clearly engaged on stage, and as a whole package is way, way above what we normally get in soubrette roles at the moment on the big stages.


William Christie as ever is exemplary in this repertoire, and Les Arts Florissants play with their usual panache.

Doesn't it look like it should be great from these costumes? But by the end my expression mirrored Danielle's here. (This is a screen shot from the prologue)