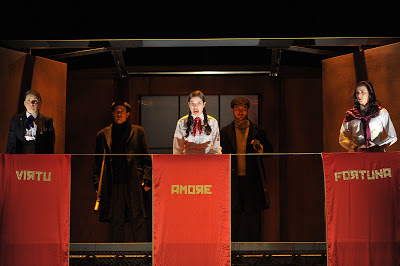 Monteverdi's L'incoronazione di Poppea, his last and maybe greatest opera, does not give up its pleasures easily to many listeners, who might find it dry and unyielding compared to the rich musical glories of the late Baroque that we are far more used to, let alone the perfection of Mozart. But like many of the best things, hard won pleasures often end up being the dearest held of all, and Monteverdi offers things which no other composer does. The psychological intensity and commitment to truth is staggering in this work, as is its eschewal of pat conclusions and plot devices for the sake of symmetry and the audience's peace of mind. Unlike the lunacy of many (if not most) 18th century opera plots of a century later, the wonderful libretto is conversational, psychologically driven, nonrepeating and therefore very fast paced, and Monteverdi matches every word with music of the same tone - intense, through composed, intimate and subtle. Nothing is illogical, farfetched, illconsidered or extraneous, though simultaneously almost no aspect of the human condition seems to be left untouched. (One passage that struck me quite forcefully this time, was a proto "Marschallin's Monologue" about ageing and the mystery of time's passing, all condensed into about 3 minutes). A cliché now to say it, but Monteverdi feels very modern. 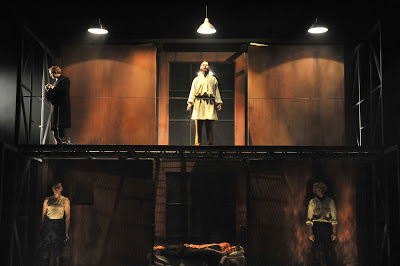 Director James Conway's carefully considered production updates the action to communist Russia under Stalin. The depressing terracotta bunker like living quarters that the characters inhabit are claustrophobic and devoid of beauty or softness, representing the spiritual barrenness of the people in power in the opera, and the oppression of those that are forced to live in such close proximity with them. The capricious violence of the plot has its obvious parallels in the regime. Poppea is just a child out of her depth, not an innocent certainly - she knows what she wants and how to get it - but she's not aware of what she means to other people. Nerone is older and Poppea is initially attracted to his powerful masculinity, but he's also impulsive and quick to anger like a child. Conway is very good at presenting the characters as complex creations, always revealed in little details of characterisation so that none seem fully good or bad, no one is truly innocent or truly evil. This I feel is just the approach that is appropriate with L'incoronazione di Poppea, as we are never dealing with archetypes or characters that are merely channels for emotions "taken off the shelf".

Reviews are nothing if not personal, and there was a niggling doubt in my mind as I sat through this, that may be very personal, but I think is nonetheless valid. One of my strongest intuitions about opera (and one that is hardest to talk about, and most often ignored) is that what is going on visually and intellectually on stage needs to match the tenor of the music.The problem I have with this production is that the setting just "feels" wrong for the music - this music is intimate, small scale, understated, made of a thousand details of texture and mood. There's never any feel of some massive edifice in the background, some underlying terror, false jollity and mechanised violence, where emotion is secret and the emotional surface of society is ironed out. Everything is immediate, the characters are very much their own people unbridled by ideology or "the right thought". There's no communism in this music! That's glib, but I hope I make myself at least partially clear. People will disagree with me here no doubt, but it was something that struck me rather strongly, so I thought I'd mention it.


Any performance of Monteverdi is going to contain a lot of interpretation due to the choices that the folios force upon the performers. Here, the lack of any sustaining instruments in the continuo was a real problem - we had a triple harp, a theorbo and a harpsichord which provided constantly shifting, beautifully evanescent textures but didn't feel fully supportive to the singers or harmony. Much of the music felt a little dessicated as a result, despite moments of compelling intimacy. The string sound was a little thin, though the odd rambunctiousness of the harmony in the more festive elements of the score were nicely brought out, especially by the recorders.

Katherine Crompton seemed a bit out of sorts as Poppea, not fully sustaining her lines, and struggling with intonation in the mercilessly exposed vocal writing. More assured was Annie Fredriksson as Nerone whose slightly brittle mezzo seemed ideal as the impetuous Nerone. High notes could be a bit disconnected from the rest of the line, but this was a fine piece of vocal characterisation and she acted the part well too. Fiona Mackenzie was a strong Ottavia, already doing expressive things and managing her wonderful music admirably, and I think she is capable of going much further. Angela Simkin in the small role of Nutrice her nurse handled the very low tessitura of her role very well and Hannah Sondison revealed a very attractive bright mezzo, also blessed with accurate execution.

David Hansford made a noble Seneca with a bass voice of impressive depth and alacrity. Tenor Matthew Ward played Arnalta, Poppea's nurse, a delightful piece of comedy casting, and in this setting she becomes a sort of Babushka figure. I kept thinking I was listening to a Marilyn Horne-alike singing in that ultra chest register she had - that is to say that despite the sillyness of it, I still found Arnalta a convincing woman! Bradley Travis gave a touching portrayal of Ottone and Peter Kirk revealed a gorgeous young lyric tenor which made one wish he had a larger part than just Lucano. I instantly recognised Vasili Karpiak's voice again with its throbbing Italianate legato from last term's Figaro - he didn't sound at all incongruent here, and was excellent casting in contrast to the more clipped tones of his fellow soldier Michael Buchard.


Just found this whilst rooting around Youtube which is absolutely stupendous: