Renée Fleming Recital at the Barbican

with Maciej Pikulski at the piano 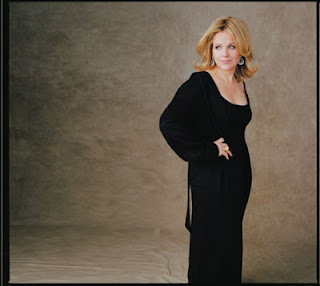 
A very brave and enterprising programme this, with half the items virtually unknown, and the Mahler and Korngold only occasionally lapsing into crowd pleasing territory. All of the repertoire centres around the boiling cultural milieu of fin de siecle Vienna, with Wolf and Mahler at its neurotic peak, Schoenberg and Zemlinsky capturing its bloated decline into overripe decadence, and Korngold it's final wheezing descent into total kitsch and overwrought, indulgent luxuriance. This makes it sound like I don't like this period of music, but actually it is amongst my favourite times of all, and with the exception of Zemlinsky, I love all of these composers along of course with Strauss, Berg and Schreker. So much intensely beautiful music was being written in this part of the world at that time, though there is a spiritual sickness at the heart of a lot of it which is surely a part of its fascination.

Fleming has performed Mahler's Rückert Lieder quite often over the past decade and like so much of what she sings, has now really made them her own. As ever her attention to the text is intimate, multifaceted and multicoloured, but she also fed Mahler's music with a soaring sense of line and purpose. I think she's much more suited to Strauss temperamentally and vocally, but this was a very lovely performance.

Before this came the set a set of five Wolf songs from the Goethe Lieder which she bravely chose to open the concert with. These didn't suit at all. Fleming declaimed the text with minute detail but at the expense of long line, she never sang above a mezzo piano, and her use of portamento severely got in the way of the music. I usually don't mind and actually like this last aspect of her singing that offends some people so much, but here it really happened far too often for comfort.


Luckily things picked up after the interval. It's hard to imagine which other major international singer would programme Schoenberg in a song recital, and Fleming's two selections were revealed as beautiful grey pearls, Fleming finally singing with real freedom, a truly full bodied tone and passionate commitment. More like this please! I was reminded of her CD of Berg Excerpts with Levine (Marie, Lulu), her first big budget recording, one of her least known and one of her finest. (There is also a much more recent and truly exceptional reading of Berg's 7 Early Songs with Abbado that provides yet more evidence for the ideal match of singer of epoch.)

Zemlinsky's Dehmel songs are rather anonymous creations, brooding, darkly chromatic, ugly ducklings, well dispatched by Fleming, though she had to stop and cough heartily in between two songs, humorously encouraging the audience to follow suit. She was struggling with a cold she said, and quietly continued to clear her throat for the rest of the recital (I was sitting very close) - sometimes even snatched between the endless arching phrases in the Korngold songs - a wonder that she got through it, and only one note seemed slightly off kilter as a result.

The Korngold songs played to Fleming's strength of delivering an apparently endless line of yearning legato. They are schmaltzy but the famous Sterbelied from the op.14 Abschiedlieder suited perfectly, as did the rapt love song Was du mir bist ("dedicated... to his mother!" Fleming delighted in telling us) which Korngold recycled in his Suite for Piano left hand, two violins and cello, one of the most beautiful of all his slow movements.

Maciej Pikulski made a deft and sensitive partner, never covering the voice, and always supporting Fleming's rubato. He let Fleming take centre stage, and occasionally it might have been nice if he had seemed more of a collaborator than an accompanist, though his playing in the postlude to the final encore was poetic and beautiful.

(EDIT: Someone has videoed the encores and uploaded them to youtube so I have linked them in the text below. The fuzz of the audio quality allow the ear and brain to "fill in" what one expects in the details of the aural texture, and the sound is compressed giving a false sense of volume, so it maybe sounds a bit plusher than it really was, but it gives a good idea, and the soaring phrases I mentioned are ably captured. The first one has zoom noises, but the other two don't.)

In the encores we finally got some Strauss: Zueignung in a superb performance - this music is absolutely in her bones, and suits her so well - it's not just interpretively that things improve, but amazingly the sound of the voice - I think it probably has to do with muscle memory and relaxation. The same was true of all the pieces that she was more familiar with and has had in her repertoire for a while - the voice actually sounded fresher, more immediate and freer. I wished she had sung some more Strauss, rather than the Wolf or Zemlinsky perhaps, but Fleming has said herself that she doesn't like to repeat things, and is always wanting to try out new repertoire and new projects.

"We've had so much Sachertorte!" Fleming announced before her next encore: Delibes' Les filles de Cadix which was dispatched with shining vocalism, some of the finest I've heard from her over the last year (amazingly this is the 8th time I've seen her live since last year's Four Last Songs with Eschenbach at the RFH). Her legendary trills have largely deserted her along with the gleaming surface of the sound, but this was still vocalising to cherish, and a couple of phrases here soared like the classic Fleming we all know and love from the late 90s recordings. As she said just before, this was a new piece to her, and at one point she started singing the wrong verse, bailed out, made light of it, and completely got away with it - even getting a round of applause during the song. She was on charming form throughout the evening, bantering with the audience about her dress ("I realise it's a bit much. I just wanted you to get the Klimt connection" [see Intermezzo here for pictures]), and introducing each set of songs in the second half with some background information, something which I think is always appreciated and I wish more artists did. (Susan Graham did this in her recent Wigmore recital too).

Finally, Korngold's Marietta's Lied from Die Tote Stadt. This is a Fleming classic, and made a glorious end to a very good recital.

A lovely evening of lovely singing - I was worried in the Wolf that she was having an off day, but each selection she seemed to get stronger, and I really feel that the lieder recital is where her strengths now lie. She got a standing ovation and seemed quite genuinely touched.
at 01:10