The Siege of Calais (L’assedio di Calais) at ETO


Donizetti's L’assedio di Calais receives its "UK professional premiere" by the English Touring Opera and such an obscure choice is vindicated here by some excellent singing and a score of unusual richness for this composer. It's a rather dour story, short on dramatic events, but in this two act presentation (with an allegedly redundant and trivial "happy ending" third act excised, though with the best of the music salvaged and inserted into the first two acts) it is concise and engaging in James Conway's staging. Conway updates it to Stalingrad ("the definitive siege of modern times", though there was a Siege of Calais in 1940 during WWII) though it might well be any of the appalling conflicts of the 20th century - what registers is the awful deprivation and desperate circumstances of the characters. There are some interesting ambiguities - the besieged people rebel against their leader Eustachio claiming that he is selfishly not giving himself up, but when confronted, without evidence he denounces the rebel faction's leader as a spy, and whips up his credulous citizens with talk of war and fighting to the last man. Throughout there's the uncomfortable feeling that we might not be sympathising with the "good guys" - Eustachio's son Aurelio is fearsomely dedicated to what seems to be his father's ideal rather than his wife and family to which he is nevertheless dutifully committed (risking his life at the beginning to get food for himself and them). 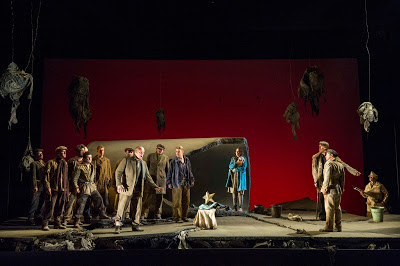 Samal Blak's set slightly confusingly utilises a pipe as it's main focus (its myriad functions don't give us a clear sense of orientation between siegers/besieged), but overall works well to create the dilapidated tenor of the evening. Everything is in a state of squalid disrepair, and hanging up are pieces of urban wreckage which disturbingly resemble carcasses in a butchers.

The score as I say is uncommonly rich for Donizetti, and has some lovely set pieces - most notably a sextet for the condemned men, and a gorgeous duet in thirds for Eleonora and the mezzo breeches role of Aurelio. This is the strongest cast yet of the three ETO productions this spring, with some outstanding contributions from the leads and not a weak link in the cast. Paula Sides is even better as Eleonora than she was as Despina in Cosi, and Helen Sherman, (on whom the make-up department have done wonders) the "hero" of the piece is spectacularly good as Aurelio, singing with verve, accuracy and commitment and possessing a voice of exciting beauty, evenness and fullness in all registers, and with a thrilling edge in the sound. She's singing Nero in the ETO's Autumn Coronation of Poppea so we have that to look forward to. Eddie Wade is a new voice to me: he is excellent as Eustachio, striding through Donizetti's writing with ease. The ETO chorus also sound magnificent in the extensive crowd scenes, and the ETO orchestra under Jeremy Silver respond once again with full bodied tone and excellent ensemble. Great stuff.

Tickets for all three shows are very reasonable indeed - go see them!