The Lighthouse and Dido and Aeneas at Royal Academy of Music 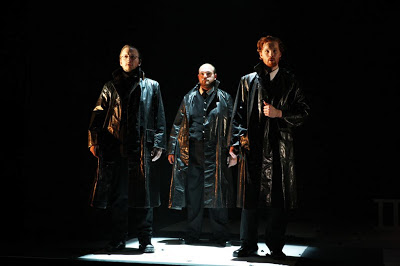 The Lighthouse is a curious opera, but one that gets better as it goes through. The force of attention required to actually keep up with the text through the orchestration and unpredictable vocal lines is extreme, and in a performance without surtitles I must admit that I found the story difficult to follow, even though diction was good. The beginning I don't think works - three men all attempt to give an account of the their discovery of an abandoned light house to their boss. The interest here is in the disparities of their accounts, but as I say it's hard to keep up with each of them, let alone compare them - I'm just not sure that opera is the ideal medium for this sort of thing. The score is standard Peter Maxwell Davies - mildly modernist, gently atonal, loosely constructed, quirkily but underwhelmingly orchestrated. Things get much better in the second half where we see some sort of actual version of what went on. Three lighthouse keepers feel trapped in each other's company in the confines of a lighthouse. At first they attempt to pass their incarceration with some singing. The first is a sort of sea shanty folk song pastiche, a horrible account of a nasty childhood, amusingly and gruesomely retold by the slightly unhinged Blazes (baritone). The second keeper, the gentle and nervous Sandy (tenor), sings a sentimental Victorian ballad, again a wonderful pastiche which reveals the character superbly, and is so generous in the context that it can't help but bring a smile to the face. The final keeper Arthur (bass) sings a salvation army song with sonorous aplomb, agony and hardship transformed into a twisted religious ecstacy, again brilliantly in keeping with the character. Then a mysterious event occurs and each character gets a substantial dramatic scena - Blazes a madscene, terrifyingly dispatched by Samuel Queen, Sandy a wistful memory of his family, and Arthur a disturbing pseudo Christian ritual. (afterwards I read the synopsis and found out that the three lighthouse keepers were killed by the officers we met in the first act, though this wasn't obvious to me at the time. Maybe I was still dazed by the lighthouse keepers' scenes. I probably should have read it before hand: lesson learned.) 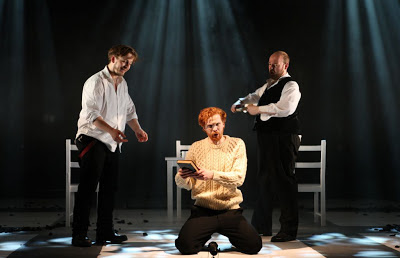 The vocal performances of the three leads were unstintingly brilliant in a difficult score that requires total commitment from the performers. It would be impossible to mark out one above the others - they were all individually great and worked brilliantly together as an ensemble. Iain Milne's exciting tenor sailed effortlessly through his music, his ballad an embarrassment of tenorial riches. The way he captured the timidity and sentimental innocence of the character was extremely endearing. Samuel Queen brings the requisite intensity for the baritone role of Blazes, singing with nuance, precision and splendid tone. He bravely and rightly pares down the voice for the folk song. Andri Björn Róbertsson seemed not so dark voiced in his recent RAM Gremin but here reveals that the true bass repertoire is well within his grasp, and though it is not yet huge in scale, there is a satisfying depth and evenness across all registers. Occasionally the vowel modification suggested he might be artificially darkening the voice a bit, but it worked for the character. Again the characterisation is strong and lucid - his sententious moralising, disapproving sobriety, visionary fear of god. All three roles require surprising excursions into falsetto, and all three sounded very good here. Particularly impressive at this was the Róbertsson who brought a fully supported sound right up into the high notes which meant that they were richer and more beautifully resonant than many a counter tenor that I have heard. Maybe a second career option!?

I thought John Ramster's production was very successful in presenting this tricky piece - he leaves plenty of ambiguity for the imagination and intellect to latch onto (surely the composer and librettist's intention) but at the same time I felt gripped throughout, even when it wasn't entirely clear what was going on. Somehow the simplicity of the setting and cutting away of the extraneous was also entirely in keeping with the music. There was impressive but understated detail in the characterisation too - the acting was simple but wholly believable and therefore engaging, even at the most farfetched moments in the plot. It wasn't quite as overwhelmingly superb as the RAM Onegin earlier this year, but then this opera does not offer anything like the riches of that masterpiece. Still, an enjoyable and wholly worthwhile evening and it was such a pleasure to see young singers rise so fully to a challenge and succeed so admirably. Contemporary English opera is in very good hands. 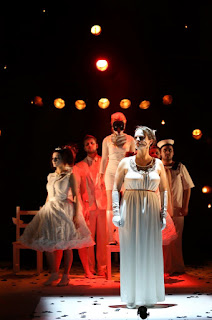 Dido and Aeneas, Purcell's evergreen one acter, has an arresting simplicity without paucity of effect, an emotional impact and richness of content that it is hard to fully explain. Director John Ramster realises this and presents the piece stripped down and bare, with Brechtian resonances that avoid us getting too deeply involved in the characters so that we instead reflect more abstractly on what the meaning of this work might be. I'm not sure I liked it overall, as much of the personal drama and clarity of the story was lost in this abstracted, choreographed, slightly clownish setting, but the concept at least is carried through logically. Perhaps the problem was that it didn't go far enough into strangeness, but perhaps the cast also weren't quite strong enough to carry it, though almost all sang nicely and accurately, with Sónia Grané a particularly sweet voiced Belinda. Rozanna Madylus caught my ear the most however and stood out for me as the Sorceress. The voice is not yet the finished article, but she seems able to draw on a pleasing range of vocal colours (an excellent sign at this early stage) some already fully formed, others clearly still works in progress, and I think she has enormous potential as a performer. 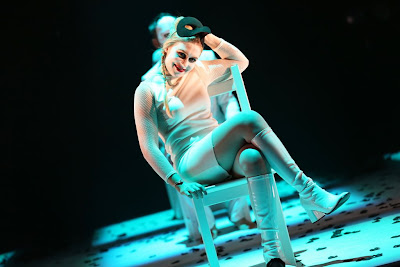