The Rape of Lucretia at Glyndebourne on Tour 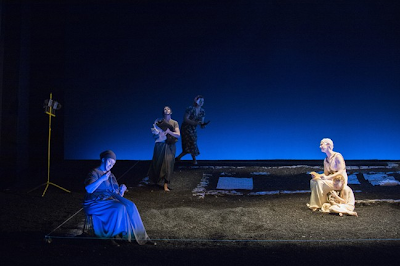 The Rape of Lucretia makes a return to Glyndebourne after a hiatus of 67 years, and for me it wasn't quite the triumphant revival that others have found it. The opera has never held its place in the repertoire despite the fact that it comes from Britten's most musically fertile decade; the score has many beauties, but the central problem is all too obvious - the fanciful, wanky libretto by Ronald Duncan which Britten has to work around, rather than with to make this a viable drama. (Britten cannot be excused in this - after Auden he was too proud and insecure to work collaboratively with creative artists of his own level, and his work suffered as a result*.) Lucretia represents a retreat from the splendid grandeur of Peter Grimes, a stripping down and thinning out in the post war years. These tendencies are of course essential to the character of all of Britten's work, so it's not a break with the expected, and the fundamental themes - loss of innocence, and society against the individual and the same as in all his other operas, though very unusually we're dealing with a woman protagonist and there's not a prepubescent boy in sight. 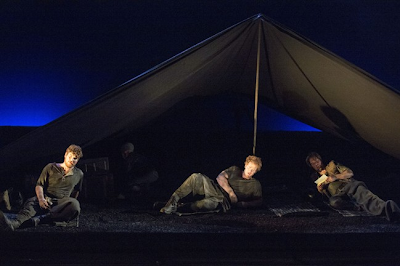 Fiona Shaw's production uses a single set which is suggestive of several layers of reality all lying on top of one other. The two narrators (the Male and Female Chorus) are archaeologists, themselves romantically involved, poring over the ancient walls of their dig. (Hmm... archaeologist narrators who become involved in the action - sounds a lot like Katie Mitchell's production of Written on Skin...). But as much as a historical excavation, Michael Levine's set also suggests a crime scene investigation. Shaw attempts to salvage the libretto by making the "historical" Greek characters earthy, gritty and human, bypassing entirely Duncan's florid language and purple prose by focussing on its content over its style. But this creates its own problems - part of the strange aesthetic of this piece is its dissociation and classical distancing of the characters and subject matter, which should grant the dramatic rupture of the crucial rape scene its shocking power. Again and again in this production the action we also see on stage directly contradicts what the libretto and music is telling us is happening. I couldn't figure out why this was, but the thwarting of the textual narrative is so overt that it can't have been due to carelessness - is Shaw showing us that the history that the archaeologists are piecing together is wrong in some important details? And simply ignoring the far-fetched words (e.g. the soldiers' egregious exchanges in the first scene) doesn't make them go away. Shaw makes it hard to take Lucretia's rape seriously because the characters aren't even addressing each other in the crucial scene, and there no sense of genuine threat from Duncan Rock's Tarquinius. Weirdly the rape makes the male archaeologist horny - even normal, healthy relationships are poisoned by this rape. There are other dramatic misfires - when Lucretia then tells her servants what to, the singers are singing but not communicating, and it's not obvious why the servants aren't getting what's going on. When David Soar's Collatinus finds out that his wife has killed herself there is absolutely no physical or aural reaction to be discerned in his character. All very strange - was this just the evening I went? 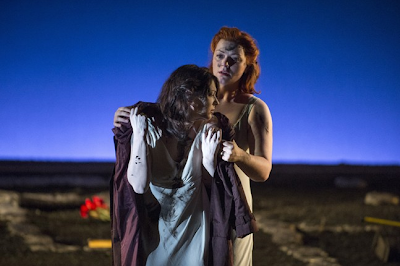 Claudia Huckle is a vocally pleasing Lucretia, possessing a genuine contralto voice of impressive colour. Unfortunately in the lower half of her voice she is repeatedly covered by the chamber orchestra - it's not the largest voice, but conductor Nicholas Collon could have done a lot more to help her out. Kate Valentine is vocally strong as the Female Chorus and an engaging stage presence. She is matched by Allan Clayton's Male Chorus who also sings admirably. Soprano Ellie Laugharne is one to watch in the small role of Lucia - singing as limpid, sweet and pure as this is always welcome; Catherine Wyn-Rogers as Bianca is also very good. The other men are more problematic. Duncan Rock's Tarquinius is acceptably sung, but as mentioned is totally without threat despite his powerful physicality. David Soar's Collatinus is also OK musically, but again there are dramatic issues. I have to say my suspicion is that the direction is off here - when lots of singers exhibit the same sort of problems, you have to assume the director is culpable. Oliver Dunn didn't on this occasion seem quite comfortable singing Junius. Britten's score seems translucent, brittle and thin in Nicholas Collon's hands. The direction is similar in feel, so it's not an unreasonable approach to take, but it's an evening light on lyricism, instrumental colour, and energy, and so doesn't make the case that this is one of Britten's forgotten masterpieces. 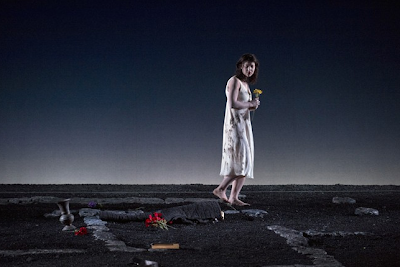