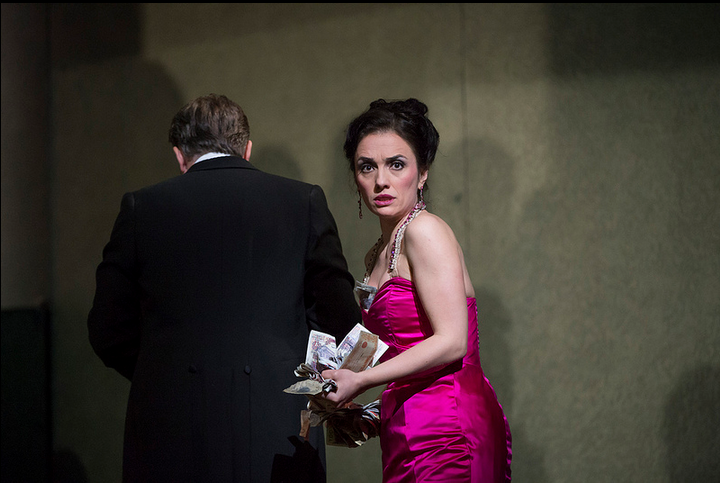 Few operas are so obviously relevant to our own times than Massenet's Manon. The story is not dissimilar from Mark-Anthony Turnage's recent Anna Nicole which tackles the same spiritual/psychological themes but fails to address them with any depth or warmth. Massenet is not a composer we turn to to plumb the depths and scale the heights of the human condition, but he was the ideal composer to tackle a story centred on greed, fame for fame's sake, and the power of sensuality, lust and sexuality over morality and religion.* The other two 19th century "bad women" blockbusters, Carmen and La Traviata, have similar plot elements, though the moral message and approach of each is very different (and audiences of the time would have reacted very differently to the various characters). 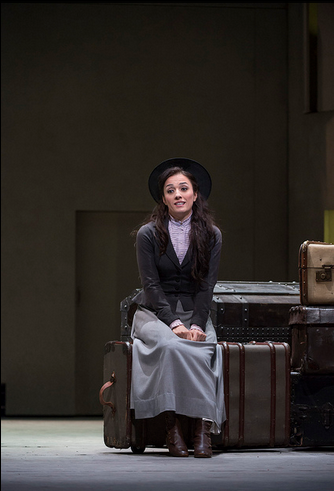 I have never been comfortable with the idea that Manon is a simple ingénue - the complexity and unremitting sensuality of her music just doesn't support this for me. Massenet builds his acts to reflect his leading lady. The first act is almost irritatingly light (certainly too long), but Manon seems to me to have more self knowledge than she is usually given credit for - after all, in her own words she's being sent to the convent by her family because she is "too fond of pleasure"! The second act is musically richer, more beautiful and morally interesting, the third goes further still in all these regards. Only Massenet could have a scene in a church where the society ladies are attending services because of their arousal over the attractive young priest, without judgement or bitterness, whatever the wry moralising of the libretto was meant to be. Massenet empathises and just shows us with a smile that these things happen in the world. In the event, the image approaches the Proustian. 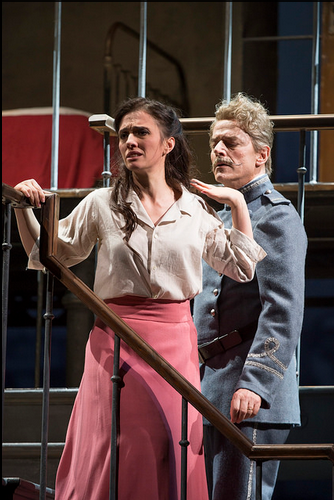 Act V can feel like it is the ending of another opera. During the first four acts good deeds and good people have been universally punished, and bad deeds and bad people have been rewarded, and there's been no hint of remorse, guilt, or pity. Suddenly, in Act V Manon is in her death throws, which feels pat and like it's merely a nod to weepy 19th century operatic convention and bourgeois morality, the latter of which has been so gloriously ignored (indeed inverted) up until this point in the opera. Everything we have just witnessed is guiltily rescinded, and then everything is instantly forgiven and forgotten. I find it unsatisfying and unbelievable in the context of the world that Massenet has created, and ultimately a cop out.


Laurent Pelly's production has plenty of interesting ideas, and is not awful, but is not well designed and so is not amongst his better shows. Chantal Thomas' set designs are abstracted but clearly reflective of fin de siecle Paris. The small Belle Époque details (e.g. strings of spherical lanterns) can't disguise the acres of gray concrete, crude railings, and ugly buildings, and Joel Adam's unromantic lighting adds to the cold sterility of Manon's drab world. Everything is a bit off kilter - pillars lean, floors are haphazardly ramped, all presumably to reflect a world gone awry. It could surely be less clumsily achieved. (And where did the electric lights and Manon's modern ball gown come from in Act IV?). The lush (one time epically horrible) costume designs are Pelly's own, which feed the eye and raise further questions about the role of image and image cultivation in women of the 19th century. He can't disguise the languors of Act I and II: the comedy scenes feel very long, and there's far too much business regarding running up stairs only to hesitate, descend, then decide to run up again, but then hesitate, etc. etc. etc. Women are endlessly running across the stage shrieking and giggling without obvious motive. Various Pelly clichés arise - the choreographed crowd scenes with freeze frames and audience facing narrations feel tired and lazy here. An example of the awkwardness of certain staging decisions: During the famous Gavotte of Act III many of crowd movements are aesthetically motivated whilst being totally inexplicable psychologically, and Manon often addresses and seduces her admirers facing away from them and with stock poses. The haunting skeletal accompaniment of the quiet second verse, and Manon's unexpectedly insightful words, go for nothing. 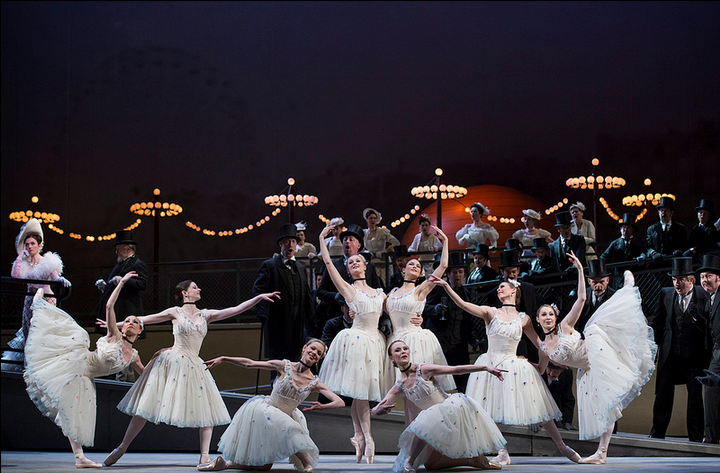 The central theme of Pelly's production is the male gaze and how sex is used as a bartering tool in a society in which women have no power. By no means is Pelly suggesting that women are all just innocent victims - like the men they are greedy and ambitious, it's just that sexual politics is their only tool for getting their way. There are a few moments that made a big impression - Guillot is brutally kicked by Lescaut after the otherwise jolly comic lechery of Act I, which is quite jarring and plunges us back into the cold waters of morality. Even more shocking and telling is the close of Act III. The ballet dancers, who look like they have walked out of a Degas canvas, are carried back onstage after their show, screaming and struggling against their male clients. Manon's ever watchful entourage are the shadowy gents that populate Degas' paintings. We are reminded that Degas' ballet dancers were prostitutes after hours, and were often in a lot of danger as a result: although life is good for Manon (at least for time being), many working women suffered terribly. It felt doubly weird when so many applauded this curtain.

A similar example of degradation in the last act is much less convincing - the soldiers escorting Manon limply prod and kick her as punishment, which just makes one think of the far more likely and obvious way that gangs of men have traditionally chosen to degrade hated women. All in all a mixed production that one feels has a good central idea that the director hasn't quite delivered on. 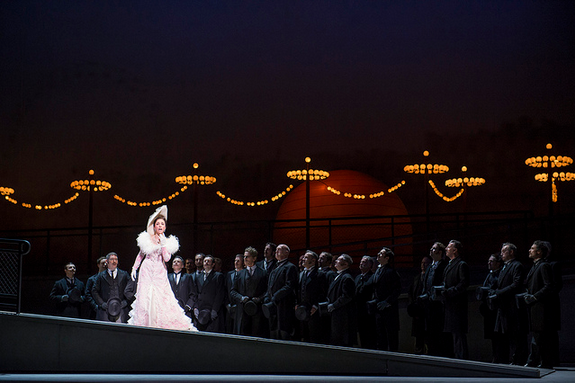 An aside: not for nothing did Beverly Sills describe the role of Manon as "the French Isolde" - it is extremely long, sits a lot in the middle voice, has frequent excursions below the stave, calls for great flexibility and line and requires ample support and resonance in every register. The rewards to the singer and audience are obvious however. Although a true Isolde voice would be quite unsuited to the part, as with Thais and Esclarmonde it's absolutely obvious from the vocal writing that Massenet did not write this for the light lyric voice that it is seems to be the opera world's current casting preference. 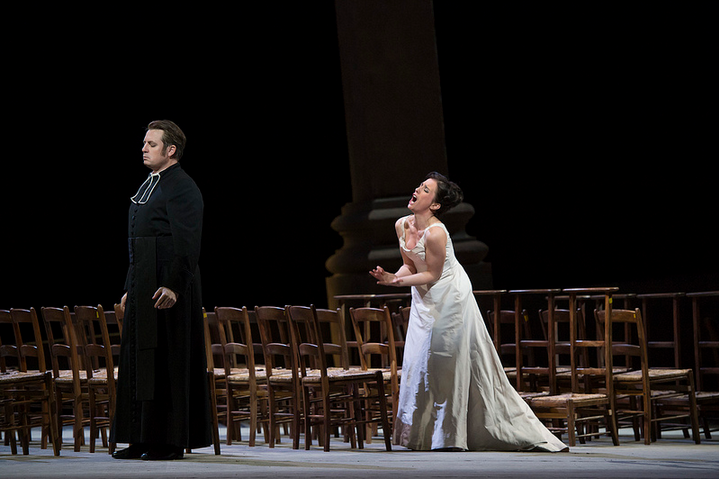 Ermonela Jaho was mixed in the title role. The big Act III arias and duets suited her best vocally, the high lying writing sitting exactly in her best range, and she seemed to have warmed up after a very shaky first two acts. In Act I and II the bright top gave way to an unstable lower middle voice and absolutely no support below the staff. The vibrato was very wide and fast, and the lack of core to the sound added uncertainty to an already unsteady sense of pitch. Feebly floated pianissimos arrived unexpectedly every two bars with no obvious musical logic. Thankfully the middle voice stabilised and the mannered vocal tricks diminished after the first interval and the fourth act was more convincing too. Acting wise, she was very convincingly girlish in the early part of the opera, Manon's wilful nature still charmingly unbridled and compulsive. Unfortunately her transformation to the vampish "princess" persona of Act III and IV was less successful - a very presentational acting style was adopted, that is "showing" the audience feelings and actions rather than them arising from and appearing motivated by concrete desires/objectives. Tellingly, the only time when there was real physical urgency in her interpretation was when she was engaged in a concrete activity which had a very strict time limit and clear standard of success - when she struggles to gather and hide the money in the gambling scene when she thinks the police are arriving. Most of the time it seemed that Jaho was doing an impression of someone who was sexually self confident and demanding - the hammy acting in the amazing seduction scene in the church at Saint-Sulpice a case in point, so too the Gavotte. While this could in itself be a valid acting choice for the character of Manon (that is, that she is merely putting on the sex kitten act and the airs and graces) we would need then to see the vulnerability when the mask is off. The transformation into goodly penitence of Act V was also not convincing, because Manon had been so unabashedly unapologetic before then, but as I have noted, this is a real difficulty of the opera, and so not a major failing of this assumption. I only go into so much detail here because I feel like this vision of the character contains many good things and is exciting, and that it is merely acting technique that is letting it down. 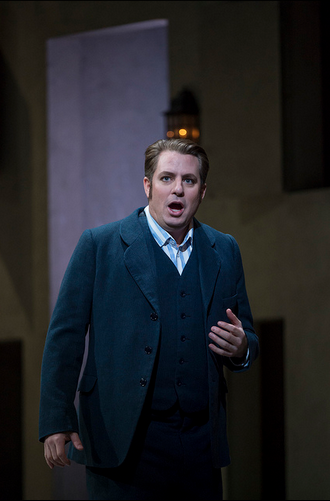 Matthew Polenzani's Chevalier Des Grieux is a simpler case. His singing is tireless and quite beautiful and he has a real sense of French style. It's not the most characterful voice, and there were croony moments during piano singing, but it's largely a very convincing vocal assumption of a challenging role. The physical characterisation is more straight forward and less interesting than Jaho's, but the role itself is less dramatically interesting and has less unusual tasks to do, so registers less as an acting challenge - he's always the manipulated party and so is mostly reacting to situations rather than . The rest of the cast are all quite acceptable though none stand out. Conductor Emmanuel Villaume inspired some good noises from the pit, but there was a lot that was scrappy too, and the music rarely glowed and coursed in the way that Massenet can.


*His opera Thais has a similar but reversed journey for its leads - the man, Athaniel starts off being religious and because of Thais he discovers his sexuality and gives up religion. Thais starts off being a courtesan and through her meeting with Athaniel becomes a nun. It seems there's no hope for women though, as even although her journey is a path towards purity it's still her that dies and the man that survives.