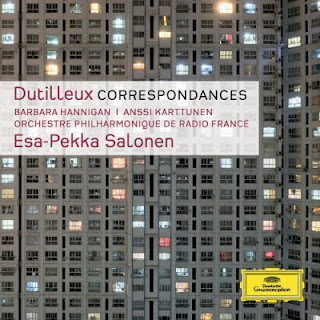 Late Dutilleux can be disconcerting. Of course Correspondances (2003) was composed earlier, but the similarities to the already long released Le Temps l'horlage (2007-09) are perhaps a little too close to comfort for fans of Dutilleux's music who will know the later piece - already the opening number "Gong (1)" reminds us quite a bit of the later song cycle (My thoughts on Le Temps l'horlage are here). The second song "Danse Cosmique" is basically the same song as "Envirez Vous" in Le Temps and in the interlude we get an accordion, quite novel in Dutilleux, but again a big feature of Le Temps. The third song "A Slava et Galina" is a letter from Aleksandr Solzhenitsyn to the great cellist Mstislav Rostropovich and his wife the late Galina Vishnevskaya who hid him when he had been denounced by the state in the mid 70s. This is a rather backward looking number - quite romantic at its opening, then more agitated, recalling late Ravel or one of the love melodies of Messiaen. The opening of "Gong (2)" stands out as a particularly ravishing orchestral canvass even by Dutilleux's standards - his characteristic seductive misty string clusters, glissandoing and blending with muted brass, low flutes, the accordion, and of course the gong once more. The last song "De Vincent a Théo" (the text from a letter from Vincent van Gogh to his brother Théo) starts with a gossamer legato line for the soprano underscored by many of the elements present in the previous song, but lighter, more transparent, the jungle's canopy to the previous song's densely humid forest floor. It ends in an airily ecstatic climax, floating rather than soaring as in the comparable climax in Le Temps l'horlage, entirely in keeping with the mood of the piece. Though the similarities between the two pieces are many and striking, Correpondances is the dreamier cycle, Le Temps l'horlage the quirkier, more wide ranging and more dramatic perhaps. Both are minor Dutilleux, but as with all music by this most recherché composer, lovely to have nonetheless. 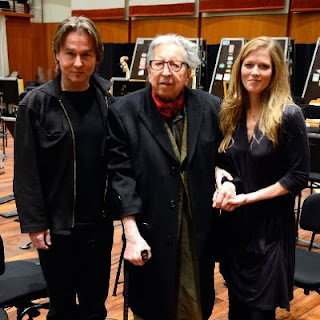 Barbara Hannigan sings it with a light purity that must be close to what the composer intended as he composed it originally for Dawn Upshaw, though Hannigan uses far more straight tones than Upshaw and is a smaller voice overall. This is a beautiful and committed reading, far better vocally than the recent South Bank recital I saw from her, Hannigan's girlish tone picking delicately over the text and supporting the line admirably. 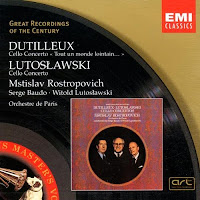 The Cello Concerto "...Tout un monde lointain..." of 1970, one of the most searching, beautiful, challenging and masterful works for the instrument of the last half of the 20th century is one of Dutilleux's greatest masterpieces. The assurance with which Dutilleux uses his eclectic materials is quite astonishing in a period of music where everything seemed to have crumbled - the logic he manages to imbue his musical landscape with, which hovers between tonality and atonality, between his sensual French forebears and the avant guard, is a wondrous thing to experience. The classic recording that Rostropovich made at the height of his powers along with the equally brilliant Lutoslawski concerto has never been equalled for beauty, virtuosity, or unstinting sense of purpose, and though cellist Anssi Karttunen is a perfectly respectable interpreter, ably getting round the notes of this fiendish score (certainly one of the very hardest ever composed for cello) and would be wonderful live no doubt, he is not the visionary artist that Rostropovich was in his prime. It is unfortunate to compare performances like this, but for anyone who is interested in this piece, I couldn't in good conscience recommend this recording without mentioning the classic one. As an aside, there is one wonderful performance on youtube which comes very close to Rostropovich: the brilliant young cellist Xavier Phillips who equals Rostropovich's intensity and assurance.

Finally we get The Shadows of Time (1997) a piece "about" memories of the War relating to children; the central movement is dedicated to the memory of Anne Frank. If we ignore this program for a moment and listen to the music we hear a lot of Messiaen again - contrasting blocks of bold colour which hardly relate or develop - but also interspersed with this a stormily theatrical method of moving forward governed by dramatic gestures and explosive contrasts, particularly in the second movement, "Ariel Malefique". The children's voices that lead the third movement manage to avoid kitsch, but it's the least interesting music in the piece. The interlude is possibly the most beautiful and unexpected section, the haze of the string chords focussing into genuine warmth, with the same note repeatedly intoned, somehow relating to the "tuning section" of the violin concerto, before we return to the flow of events as we heard them before. The last movement sounds like a misty jazz standard from the '40s - 'Round Midnight perhaps: is the ambiguous title "dominant blue" referring to this? Once again, I'm not convinced that this is one of Dutilleux's best pieces  -there's little here that we haven't heard before from him done better - but there's plenty that is very beautiful, and as always it's immaculately crafted and worth hearing.

I must say that I've never heard Dutilleux's music sound bad in any performance I've heard - it seems to be so thoroughly well composed, clearly imagined and well notated that it's difficult to get wrong, provided the musicians are up to the challenge of playing it. I can only say that the orchestra under Esa-Pekka Salonen's guidance plays admirably, giving full thrift to Dutilleux's palette of colours. A bit of a cop out but I'm at a loss otherwise.

If you're new to Dutilleux I would recommend the cello concerto (with Rostropovich), the violin concerto (with Stern) or the string quartet before sampling this CD, but this is a nice disc with the first commercial recording of Correspondances and so well worth acquiring for those who are interested.