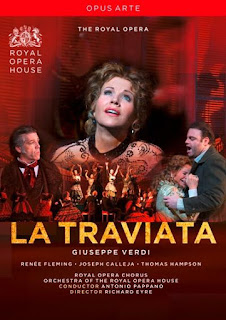 
As with most Traviatas, this DVD is all about the soprano, and this version was surely filmed almost entirely for Fleming's sake. Fleming's singing of the Italian repertoire has been the most controversial aspect of her very broad ranging career, some complaining that her singing in this repertoire is fussy, mannered and stylistically wrong, but this is a very personal and individual performance from her that offers a great deal and was ecstatically reviewed at the time.

Richard Eyre's production is quite traditional and very adaptable to the strengths of the soprano which is probably why it has lasted so long at the ROH. He returned especially for this revival as he is a fan of Fleming, and as a result the direction is extremely detailed and there are countless moments of subtle but brilliant insight. Act I is the plainest and the set feels a bit cramped for a party and it isn't nearly seemy enough, but Eyre effectively and convincingly traverses the insane pace of Verdi's exposition. Fleming brings an unusual elegance, glamour and nobility to the role that is quite magnetic. I was actually surprised at how well Fleming acts in this Act - usually she is merely adequate when being happy on stage - she's generally much, much better at acting the bittersweet, the wistful, the sad, and even the angry parts of an opera, which is lucky, because that's basically what full lyric sopranos do for a living. Still the acting becomes quite artificial here especially when she's thinking about singing the right notes during "Sempre Libera" which taxes her enormously, noticeably more so than it had done in her previous outings of this role. In an interview she has said: "I don't think anyone enjoys singing this... I don't know a single soprano who likes it... it's not written well for the voice." She certainly gets through it just fine, but it's not quite as effortless as we're used to from her (but then we must remember how astonishing that she is singing this well at 50). Calleja is at his weakest here too and seems not at all engaged dramatically. Luckily they both warm up in the following acts.

Act II is also conventionally staged, but again there are lots of lovely details of characterisation and points of telling interaction between the characters. Violetta's anger and panicked outburst in Act II seems to surprise her even more than it does Germont: she isn't aware of the strength of her own feelings until this moment, and this threat to her relationship unexpectedly and explosively forces her to face up to her own mortality - the crisis we realise has been bubbling beneath the surface for some time. It's very powerfully presented. Fleming's "Dite alla giovine" is truly exceptional, and now that she's in her home ground dramatically, the emotion feels completely genuine for the first time. Interestingly Fleming's Violetta is very forthright and far more upstanding than we usually see - Fleming's view is that Violetta is popular because she has such strong moral integrity and this certainly shows in her portrayal. Traditional productions such as this do tend to ignore the sleazy aspects of the story, going with the "courtesans were immensely cultured women" line, which suits Fleming's character and attitude, but it's clear that its only part of the story, and a sentimental dishonesty too.

Despite some questionable acting, Thomas Hampson manages to be an extremely unpleasant Germont - he's not just misguided and oblivious to the seriousness of his actions as he is often portrayed - here he merely plays dumb, and is otherwise manipulative, callous, cold, violent, entirely self serving and without remorse. Vocally Hampson is very accomplished, though by his own high standards seems not entirely comfortable as it's not really his fach, but he is of course a very talented singer and is more than capable of singing the part.

Fleming's Act III is perhaps not surprisingly her strongest, and it's simply heartbreaking. I can't think of any other currently performing soprano who could deliver this much pathos vocally in this scene. The beauty of the voice, so sensitively coloured and frail, is quite miraculous. Violetta's passionate outbursts are huge releases of energy which we see she must recover from, every show of strength has its immediate cost - all this Fleming manages to put into the music without endangering the line. I would say that 2009 is the last year of Fleming's prime - the last year where real feats of coloratura are still possible, the support remains absolutely rock solid, and her trade mark timbre is still full and beautiful in every register. But it's clear that the voice isn't quite as pristine as in her 2006 Los Angeles La Traviata DVD, and certainly less so than her 2004 Met Traviata (of which bootlegs easily available online for free, and there are clips on youtube). Still, much of the vocal beauty that she is famed for remains on this DVD, and there is great sensitivity to the text, maybe more so than ever in some key moments, the result of hard work on this with Pappano.

Joseph Calleja has an extraordinary tenor that becomes firmer, more secure and more even the higher he sings. Very unusual. The vibrato is very fast and narrow which works well up high, but this intense quality is taken down into the low voice which as a result can become slightly unstable and unpredictable. This is exactly the right repertoire for him though. His acting varies between simply walking the part, and quite acceptable (especially when he's angry in Act II) but it's clear that this is a vocally led performance from him.

Pappano leads a thrilling and nuanced account of the score, bursting with colour, and he carries the whole cast brilliantly along. This is the sort of repertoire that he excels in and he's clearly having a great time. There's a very interesting DVD extra which is an interview between Pappano and Fleming, which can be viewed on youtube.

Here's a clip of the very ending that someone's cheekily filmed in a cinema (hence weird framing!)