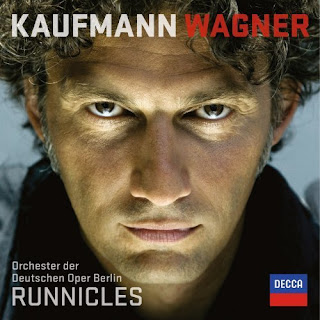 What a gorgeous CD. Kaufmann has recorded quite a few Wagner excerpts before on previous recordings, and in some regards they seem to be the tenor roles which suit best: the richly beautiful baritonal timbre, interpretive nuance and psychologising and intensity of his acting all are ideal in this repertoire. The one thing that I have reservations about is that the voice, while timbrally perfect - heroic, manful, beautiful, even - is not actually of heldentenor size. It's basically an exceptionally dark lyric spinto tenor with very great stamina and a superlative technique. On recordings he sounds absolutely wonderful, but there is simply no question of him being an adequate Siegfried in the opera house.

On record though - what a dream - despite many other promising talents, there is not a single tenor singing today who could hope to match this recording. The voice that comes to mind most readily in Wagnerian history as a comparison is Ludwig Suthaus who had a similar timbre, though was a bigger voice with brighter high notes. The level of artistry though is similar and both are not afraid to sing truly quietly, with Kaufmann daring even bigger extremes in mood and colour than almost anyone I've heard before in this repertoire. Some will find the top too covered and "swallowed" especially in quiet passages, but this is largely a taste thing - it's certainly not a very Italianate sound, though his legato is quite exceptional.

Kaufmann's Siegmund is a relatively known quantity now - the recent Met performances, with the Met Broadcast and subsequent DVD release, as well as the newly released Gergiev studio/live recording - and it may be the most obvious fit of all the roles presented here as it's such a low part (even Keenlyside was scheduled to sing it at one point!). We get the section starting "Ein Schwert verhiess mir der Vater", and in this charged passage the general darkness of the sound and flashing brilliance convince entirely as the damaged Wälsung. His "Wälse!"s are as thrilling as you would expect and I very much hope to catch him live in this role at some point.

I have stated my reservations about his attempting Siegfried already, though this is a wonderfully detailed account of the lyrical Act II Siegfried monologue - if anything maybe even too sensitive for the rough young Siegfried. Lohengrin he has sung on stage and has recorded this excerpt in its truncated final version before too. We get the whole breadth of Kaufmann's artistry here, and it seems to be quite ideal for him - he lightens the voice admirably, caressing the line with uncommonly tender care, while not sacrificing in any way the heft of the climax. That he's unafraid and able to make Wagner singing comparable to lied singing, thus playing to his strengths, is part of what makes him such an interesting interpreter in this repertoire. Parsifal does not appear on this recording but is also ideal for the baritonal sound that Kaufmann has - excerpts were previously recorded on the German opera album. Missing too is Tristan, who I would say would be a better fit for him than Siegfried, tessitura wise and temperamentally, but is still a huge stretch at this stage in terms of stamina and vocal power - there are plans to sing it in a few years but I wonder if it's really feasible. What we do have that relates to Tristan und Isolde is the Wesendonck Lieder, a song cycle which I love very much. It is very unusual to hear these songs done by a tenor, but Kaufmann sings them so well that one almost forgets the soprano/mezzo ideal that one has in ones memory. These songs are not as tortured as the opera which they were incorporated into, and Kaufmann never makes them something they're not, taking a less directly emotional approach than he might if this was an operatic role. Again it is the interpretive subtlety that sets him apart from other tenors with similarly accomplished technical apparatus or beauty of sound (both of which are already rare enough in themselves!).

Tannhäuser is less obviously a role for him as it sits so relentlessly high and is so heavy. I'm sure he could sing it, but I didn't love his recent Bacchus in Ariadne which has similar requirements. However, the excerpt here reveals a surprising ability to lift the centre of gravity of the voice - paring it down and brightening it so that it doesn't for one moment sound effortful: the voice sounds very different to the Siegmund excerpt, and the result is very beautiful indeed. Walther from Die Meistersinger also lies very high and again conventional wisdom says that someone can sing both this role and Siegmund equally satisfactorily. The Act I excerpt heard here "Am Stillen Herd" again thwarts expectation and suggests that Walther would also work beautifully, though possibly (?) the tessitura would be difficult to maintain over an evening. Kaufmann has only done it once live - in concert performance at the Edinburgh Festival in 2006, so maybe it's also not the kind of acting role that he would enjoy.

There is a feature of this disc which is basically always a problem on Wagner excerpts CDs - the excerpts all finish with a jarring lack of finality - the feeling of "bleeding chunks" has never felt so painful.

The voice is very forwardly placed in the mix as is traditional on recital discs. Support from the Orchester der Deutschen Oper Berlin is generally very good, a few errant moments of tuning aside (some are surprisingly obvious), but generally the sound is very full and rich. The last degree of care and special beauty is missing, but this is an artist excerpts disc and it's not necessarily the place to expect the most detail in the orchestral playing, and Donald Runnicles is a more than adequate partner for Kaufmann's art.

All in all this is a very enjoyable album and that must be recommended wholeheartedly to any fans of Wagner or even those who merely love great voices. This review is mostly uninteresting because there's so little to criticise!