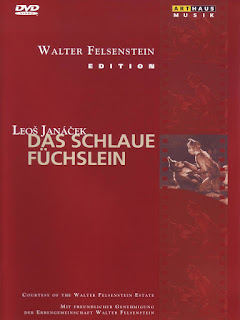 
This opera film was made in 1965 by the great Austrian director Walter Felsenstein. It looks back to an even earlier period of film making in terms of style, an approach which works beautifully here for the subject matter and style of the piece. I don't usually like opera films because of lip syncing, but unusually it really didn't bother me here, and in fact I liked the intimacy of the studio setting.

As The Cunning Little Vixen is one of my favourite operas, I've seen a lot of productions. The animal costumes and choreography in this film are probably the best I've ever seen as both capture something very accurately about the way animals move, look and even breathe. I sometimes despair of productions where it seems like the designers and choreographers have never witnessed any nature first hand, or are simply not sensitive to it, so this is a major plus point of this production. In the love duet between the Vixen and the fox, there's a real sensuality, without recourse to anything that couldn't be shown before the watershed.

All of the singers sing in a very parlando style, stressing diction and characterisation above line and ideal timbre. All are "character" singers in this regard. It works well in the context, though I wouldn't want to hear it like this every time.  The fox is unfortunately cast as a tenor rather than a soprano, and he resorts to barking a bit during the duet. Subtitles are serviceable but aren't always very accurate, in the already changed Max Brod/Felsenstein German libretto which is a bit of a shame.

This performance by conductor Václav Neumann and the orchestra of Komische Oper Berlin links the piece as strongly as possible to the German operatic tradition, via Dvorak and Viennese operetta - the approach to phrasing, sonority, texture and timbre are all very mid century German and quite unlike what we'd hear in this piece today. Overall, I think the opera loses something in this approach as it irons out many of Janacek's quirks, charms and inspirations, smoothing them into something less glistening, less gawky, less sexy and more Romantic, symphonic, Teutonic than the piece really is. But this is still a fascinating historical document in that it lets us hear Janacek how he was seen pre critical editions (and just as importantly pre Charles Mackerras). For that reason (and the fact that it's not in Czech) it can't be a first choice, but for anyone who already has a measure of the work, there is much to enjoy here, and dramatically, this is a touching, superbly observed, and very traditional production of the work. It's the sort of thing I would have loved as a kid, having been given a taste for old style children's shows (Watch with Mother, early-mid Disney (especially Fantasia and Dumbo) and German books from my mother's childhood).

There are two versions of this DVD on the market. I'm told the Arthaus/Naxos one is the better transfer, and is the one I have reviewed here, but I haven't seen the "Immortal" one.