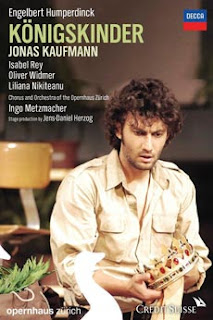 Engelbert Humperdinck actually wrote several operas, though he is remembered for only one - his astonishing masterpiece, Hansel and Gretel (1893). Königskinder, another fairytale opera, is probably the most famous of the rest, and it has been performed and recorded surprisingly often, especially recently. Written in 1910, Humperdinck had by this time actually regressed compositionally since Hansel and Gretel, apparently entirely unaffected by the tumultuous upheavals that were shaking music from every side - in fact it's so calm and restrained that it feels reactionary. The score is drenched in Wagnerisms, but it is lamentably generic compared to Wagner's music, and lacks also Wagner's sense of momentum (which the vital and vivid Hansel and Gretel certainly doesn't lack). It's perfectly pleasant and professional moment to moment, and there are a few quite beautiful stretches which clearly emanate from the pen of a significant musical mind, but for the most part it's strangely characterless, the music and text lacking tension, and so the result is a little dull and unmemorable when taken as a whole.

This production updates the piece to some point in the recent past, with some people looking vaguely 50's-ish, but there are burger king hats and goths so it can't be that early. Basically we're seeing a society struggling to come to terms with new wealth and a new social order: the people are craving a ruler and have articulated this desire en masse. The child heroine, the Gänsemagd ("goose-girl") lives with her abusive Witch grandmother in a castle which here appears to be an abandoned school which the Witch has converted into a lab in which she is growing some sort of herb (possibly cannabis?). As a result of this isolation and abuse the Gänsemagd has retreated into an imaginary world (she plays with cardboard cut out geese) and her innocence and joy is untarnished by the Witch's cynicism. When the prince, travelling incognito as a poor huntsman, finds her he is a fulfilment of her fantasy, but she is unable to come to terms with reality so quickly and so she doesn't follow him. When in the second act they are reunited, the crowd laugh that this pair of poor children might be crowned king and queen, even although they have fulfilled all the "official" requirements - the crowd want people to rule them who appear worthy of their affluence. In Act III, the opera totally changes tone and is no longer a comedy, instead becoming a stern warning to societies who don't look after the meek and needy - the fiddler who helped the Gänsemagd in the first act is now blind and destitute, the two Konigskinder in a similarly bad state of affairs. The Prince trades his crown for some bread, but the bread happens to be the poisonous Witch's bread that was baked in the first Act (a minor event which I didn't remember until I reread the synopsis), and the two die after receiving ecstatic visions. The fiddler returns to sing the questionable moral of the tale. It all sort of works, but it never feels engrossing, the comedic elements are laboured to non existent, and visually it's not exactly generous on the eye.

This is a brave role for Jonas Kaufmann - not just because the Königssohn is vaguely paedophilic (it's suggested that he's much older than the Gänsemagd) and a woman beater - but also because it's not that spectacular vocally - one does wonder a bit why he took it on until the third Act where there is a half hour duet for the romantic couple. Except in the romantic scenes his acting is not at all convincing and he simply cannot do comedy. He sings gloriously: manful, heroic and beautiful, as is fully to be expected of this artist in his prime, though one might argue that a more youthful timbre would be more apt for the role.

The rest of the cast are nowhere near his standard vocally. Isabel Rey has a rather hard and mature sounding soprano, though she gets away with it because she controls the voice well, and she totally convinces in her acting as a young girl. Oliver Widmar is totally acceptable vocally (but nothing more) as the fiddler. The rest of the cast are vocally OK but dramatically null. The Zurich opera orchestra with Ingo Mezmacher at the helm give a slightly routine performance of the score, only intermittently giving it the extra push that it needs.

Overall, this is possibly not the best way to get to know the work as this is not a musically ideal performance, and it's not a very inventive production, but Kaufmann fans will no doubt want to see it, and it is the only available DVD of the work.
at 22:10