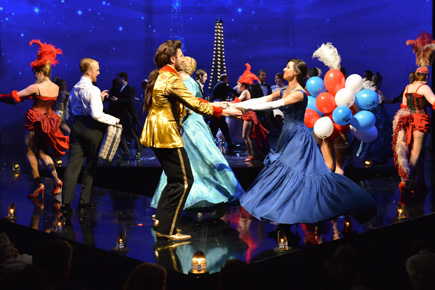 Foreign operetta isn't a reliable feature of London operatic life, and so a chance to catch some is always welcome. And a production as well played, sung and designed as this makes one regret its rarity in our big houses even more. (That said, we're getting Die Fledermaus at the ENO this Autumn, which I am greatly looking forward to.) La Vie Parisienne is sort of a strange choice as an end of year production as it really doesn't showcase these young voices very much, which one would have thought would be one of the principle reasons for putting on the show, but anyhow, this was a treat for the audience. 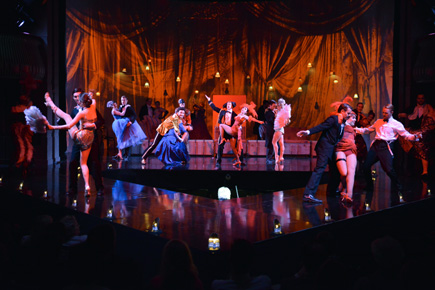 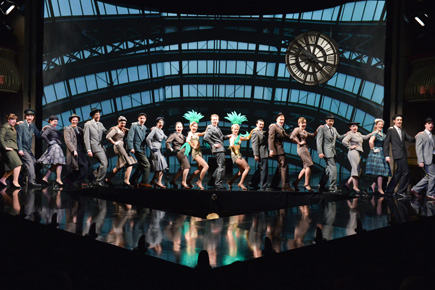 Bob Bailey's designs are quite brilliant, giving the feel of a show much more lavish than one usually experiences at the London music colleges. The back of the stage is a curved sheet onto which various interiors are projected - so we get a train station, a luxurious Parisian apartment, a velvety Moulin Rouge boudoir, and at the end a picture postcard night sky replete with mini Eiffel tower. This innovation is surely a great solution for many small companies that have limited time and space to build sets and backdrops. Set items are minimal but effective - the improvised chairs made out of suitcases in the fake hotel nicely reflect the lies the hapless Lord and Lady Ellington are being told. Mark Doubleday's lighting works unerringly well in tandem with the sets to produce a "showy" and slightly heightened air so that we really get the sense that a show (within a show) is being put on by the characters in the operetta. Kay Shepherd's choreography is simple but effective and she manages to capture the manic energy of the music in the crowd scenes. Unfortunately, Jo Davies' direction was much more problematic.

For a piece as totally sex obsessed as this, this production was a strangely prim, sexless and British affair. Virtually every character is jolly open about how horny they are and how they'd love to have an illicit encounter with someone (but don't tell the wife etc.) however the most Mary-Poppinish titillation is all that is delivered, with no hint that anything might be consummated. Absent too is darkness, pain, jealousy or embarrassment. Women occasionally will hint at their desires, though the production never makes it clear that they are not simply motivated by money, but 75% of the time we're dealing with unapologetic male urges, accompanied by the boundless means to follow these urges. 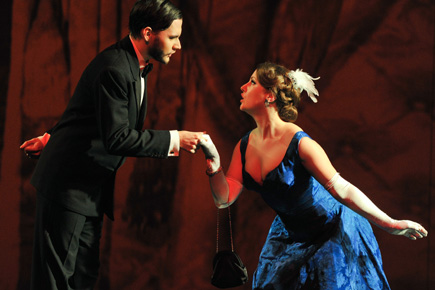 It makes for a strange atmosphere - the "anything goes" attitude and the absence of any taboos or social convention to thwart, renders everything cheeky but not saucy: sex deprived of sexyness or taboo, everything for entertainment only, delivered with a gormless smile. It's enjoyable and a fun old romp, but where's the frisson, debauchery, camp, subversion, kink? The comedy is also strangely handled - there are plenty of laughs in the libretto, a very convincing and idiomatic translation by Alistair Beaton, but it never seemed that Davies knew why something was funny - so some things hit, and others don't at all. A case in point - Lord Ellington says the French are immoral, and his trousers fall down. This isn't ironic or hypocrisy because your trousers falling down is not a sign of immorality. It's never totally straight, nor is it played for lunacy, instead bridging some awkward middleground where the jokes don't resonate in a social context nor in outrage and delight. The accents are silly, but not that silly, there's lots of clichéd French/English banter, plenty of "isn't opera awful" jokes, all standard stuff. Inexplicably at the end everyone announces that they are going to get married, and it's staged sincerely even although nothing in the libretto or staging has prepared us dramatically for this - no irony or cynicism at all called for here? Worst was the way the dialogue was handled - characters spit out their lines as fast as possible with no break between speakers. The result is that no one is truly responding to what the other has said and so the delivery is rather generic, unfunny and wooden, however much energy or inflection is being put into it. Since the entire cast were doing this, I can't help but put the blame at the foot of the director. 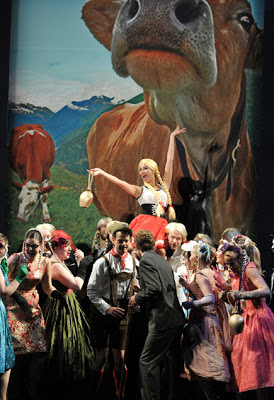 Musically this was an excellent evening, with no weak links in the cast, and boundless energy from Michael Rosewell and the RCM orchestra in the pit. Louise Alder's voice immediately stood out as Gabrielle the Glovemaker, and then in her increasingly elaborate and show stealing scenes (including a superbly delivered yodel song) she distinguished herself as an immediately castable young singer. Her acting is fluent, her movement on stage very natural and her voice is beautifully produced - a shimmery ribbon of excellent legato which never stints on diction (listen to the clips on her website here). Luke D Williams revealed a lovely baritone as Bobinet, and Bradley Travis's Lord Ellington was also very nicely sung. Katherine Crompton's Metella suggested to me that the voice was capable of very much more, and I'd like to see her in some Mozart say. Vasili Karpiak's Brazilian was incomprehensible, and sadly the role did not give him enough legato singing to do, as this was a voice I have very much admired in the past. Matt R J Ward's Frick was teetering so close to camp that it seemed prudish to have held him back. Overall though this was a great ensemble effort, with every single singer showing real promise. The good elements of the production disguised the inept direction to the extent that it was overall a very enjoyable evening. 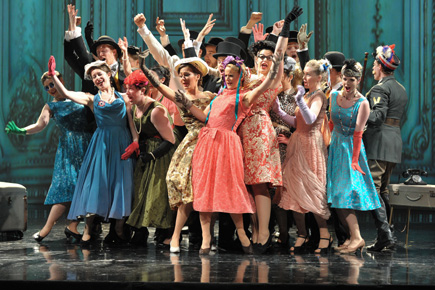