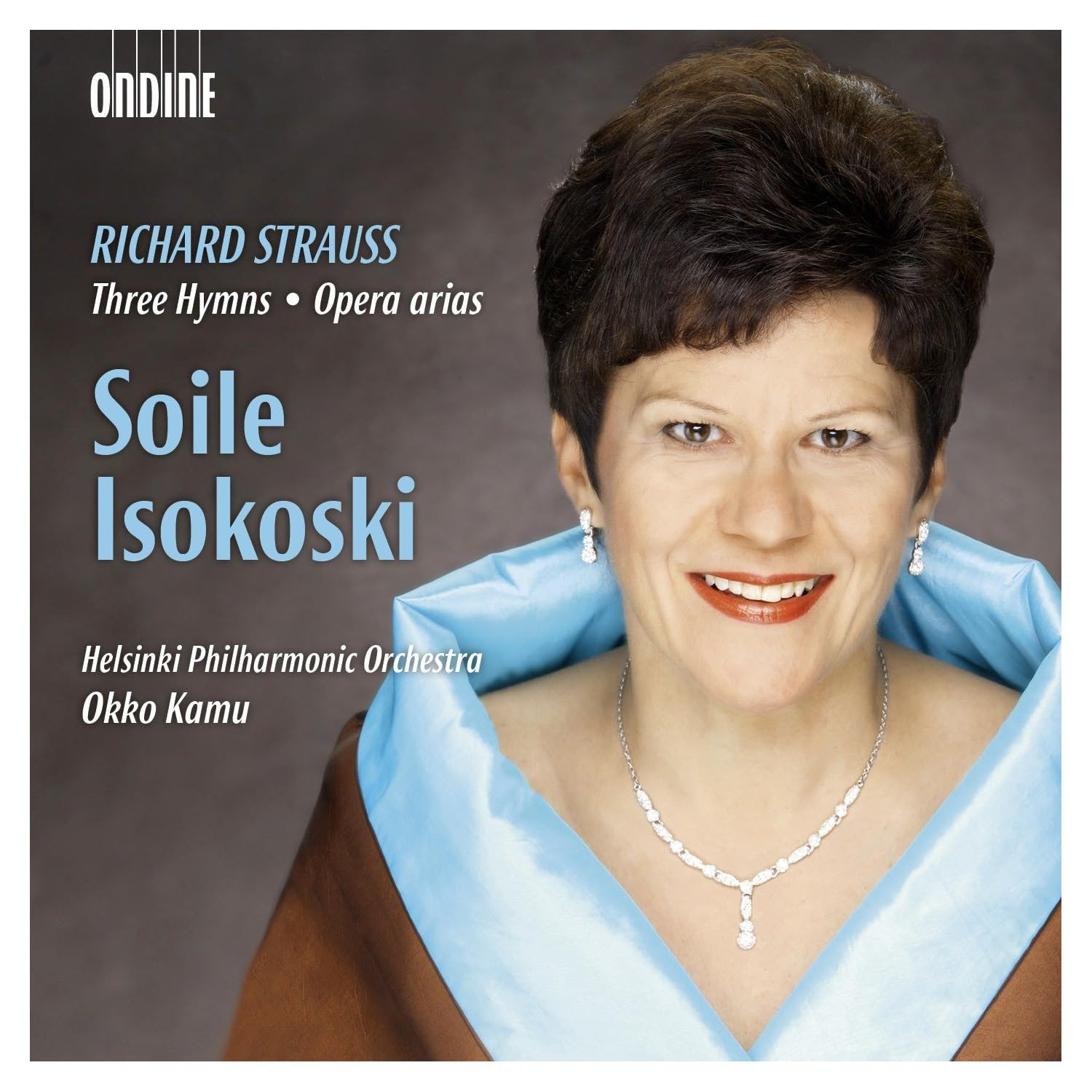 Soile Isokoski's decade old recording of the Four Last Songs was rightly heralded by the critics at the time as a major new release - a voice of shimmering beauty in pristine condition giving a radiantly pure reading of the autumnal (yet evergreen) song cycle, along with a wide selection of other orchestral songs, most still relatively rare in the concert hall, presented with the most advantageous advocacy from singer and orchestra.

So how does this follow up fare? The focus this time is far more on operatic repertoire and we have excerpts from Der Rosenkavalier, Ariadne and Capriccio, along with the rarely heard Three Holderlin Hymns. The ultra silvery brightness and delicacy to the sound is still there, and the formidable technique still fully in evidence, though the vibrato has subtly widened, and there isn't that last degree of ease and fluency that was so appealing in the last record. Still, there are few sopranos around who are singing like this at the moment, so one cant complain too much in this regard.

What I do have issues with is the lack of commitment to characterisation. The blankness of her portrayals, a kind of anti-expressionismo, where an "instrumental" sound is almost always preferred to meaningful response to the text, simply will not do in Strauss of all composers, whose marriage of word and music is probably the tightest of any composer. (Wagner marries text and sound very closely too of course and is Strauss' principal influence along with Schubert and Schumann, but Strauss outdoes them all for specificity of colour on each word in a phrase.) Occasionally Isokoski will shade the line such as the moment of self mockery when the Marschallin imagines herself as "Die alte frau ... Die alte furstin Resi". But then in "Die Zeit, die ist ein sonderbar' Ding", she might be singing about anything and it is a million miles from the whispered moment of realisation and quiet despair that Strauss has so movingly composed for the Marschallin. The extent to which she ignores not just the text, but the emotional tenor of this music is almost wilful and borders on the bizarre. Is she not moved by the beautiful music at least, if not by words? In the last Strauss recording she made, this bland, uncommitted quality came across as a sort of floating radiant purity, unusual in Strauss singing where the beauty of the music, and arching, aching phrases are often or even usually suggestive of rather more carnal activity. But it's not enough here.

That the language is not a priority for her is again reflected in her German which rarely sounds truly idiomatic, and occasionally is just plain bad - "Mashmal steh ich auf, mitten in die Nacht". "Der aufgeblasni schlichte Kerl". Very surprising especially considering how often she sings this role, but also the fact that this is a studio recording, where these things are so easily rectified.

Isokoski is singing Ariadne at Glyndebourne next summer. Glyndebourne being a small house makes it the perfect venue for her to sing this role, which is at least one vocal category too big for her really. As I noted before when I saw Fleming's debut in this role earlier this year, my preference is for a silvery, lyric sound in this part (see: Schwarzkopf, Della Casa), though that doesn't mean that the low tessitura can be ignored. Isokoski lacks the chest resonance that this role ideally calls upon (which conversely is surely part of the reason for her vocal longevity), but she does sing very beautifully in the high lying phrases, and she can get away with less characterisation as Ariadne is not the four dimensional character that the Marschallin is. Still there are textual problems ("Stilla Gott"), and vocal shading seems incidental rather than chosen to match the music and text.

The final scene of Capriccio, one of Strauss' finest inspirations, is again beautifully sung, Isokoski giving full thrift to the huge arcs of melody, never once sounding strained, and from a purely singing perspective she is most successful here of the operatic excerpts. But once again, the lack of attention to the text means it isn't as moving as it should be. I won't go on about it.

The orchestral songs fare better. It almost goes without saying that operatic characterisation is very different from interpreting a song. The former is about creating and developing a believable, fully rounded character, the latter about presenting a poem in heightened form and communicating its ideas. Naturally, the same technical and interpretive skills are used in each but with a subtly different order of priorities. Some singers can do both superlatively, some can do one and not the other, and some can do neither, despite having a wonderful voice!

The Three Holderlin Hymns of 1921 are not top drawer Strauss, though they do point the way towards the "late" Strauss (which wasn't to emerge fully for another 2 decades) in their ecstatic soprano soaring against a softly shifting, fundamentally rather plain, though magically glowing orchestral background. There are many wonderful moments to cherish (not least the beginning of the second hymn, Ruckkehr in die Heimat, and the closing minutes of Die Liebe), though by this stage in his life, Strauss' finest song writing was mainly behind him and they lack the freshness, spontaneity and originality of his earlier orchestral songs. After his relentless exploration of presenting the text in his contemporaneous opera Intermezzo, Strauss takes a break here word painting wise, and he just lets the soprano sing on and on. This suits Isokoski just fine, and she finally recalls the lovelyness of her previous Strauss recording, seeming much more in her element, not just interpretively, but technically too, the voice ideally matched to the surging orchestral canvass.

The playing of the Helsinki Philharmonic Orchestra is mostly fine, accurate and detailed, though occasionally there is a little slackness, and Okko Kamu's direction lacks forward momentum and drive. This is not a matter of speed - things are on the brisk side even, especially in the Ariadne excerpts, but somehow the internal tensions of the music have to drive the music forward, and there's rarely a feeling of that here outside of the songs.

I don't want to seem like a one track reviewer, but this is my blog and so I will indulge myself. This CD made me return once more to Fleming's Strauss Heroines CD, and once again I simply marvel at the artistry. In it's prime in the late 1990s, Fleming had an even more beautiful instrument than Isokoski's, just gleaming and glowing with overtones, and a better technique that is even freer to sing every phrase exactly as the singer wants. But most importantly we get the sense that in German repertoire at least, she is an interpretive artist of the highest calibre and stature: her pointing of text and line is endlessly nuanced, her selection of vocal colours and timbres, emotions and mood always apt and can change on a knife edge, every word matters, yet almost miraculously she never gets in the way of the line, the legato absolutely exquisite and apparently endless. She knows when Strauss wants the voice to bloom and when to hold back, and these are portrayals of the utmost feeling and depth in every parameter. Bonney and Graham are ideal partners, and the Vienna Philharmonic with Eschenbach at the reigns make one of the most glorious sounds ever committed to disc. 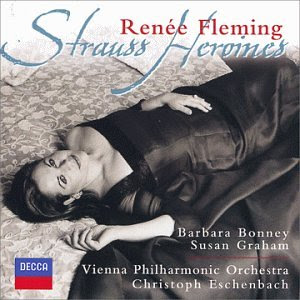