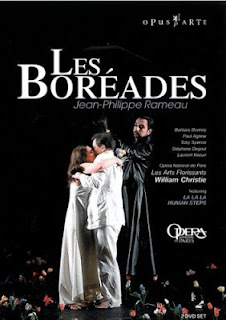 
Written when the composer was 80, Les Boréades is Rameau's final opera. Even at this age Rameau was exploring, and though it's not the most compelling of his operas, there is still much to admire. The exceptionally inventive, unusual and beautiful ballet music in Acts 3, 4 and 5 form the core of the work's musical appeal, but there are lovely moments for the solo voices and choir too, one particular highlight being the final brief duet for the lovers.

This opera does not have the richest libretto, and Robert Carsen has done a very admirable job in fleshing it out, creating a coherent and simple concept that binds the piece together, is visually strong, and is entirely respectful to the piece - absolutely no ironic quotations marks here. Carsen depicts a dour northern civilisation which the queen Alphise is from, and from which also come the two sons of Borée (Les Boréades), one of whom she is meant to choose as a suitor. They are affected, artificial, controlled and authoritarian. But her true love Abaris comes from a much warmer culture which is subjugated by the colder, officious civilisation. Overprinted on this is the play of seasons, and the very large dance element of this opera. It seems to be quite rare that dance sequences are well served in operas, at least in the UK, so it's a pleasure to see such accomplished dancers and interesting choreography. In fact, a large part of the character of the northern civilisation is communicated through the skittish, efficient, and alarmingly fast dances that this culture favours.

Barbara Bonney is the premier youthful lyric soprano of her generation, but has made a career primarily out of the German repertoire and she does not seem entirely in her element here. It's not just the language though - the role of Alphise requires dramatic declamation and weighty, angular coloratura which seem to really challenge her (disconcerting for us admirers that are used to everything seeming effortless for this singer). That said, she still does well as she is a superb actress and a captivating stage presence, and the basic timbre of the voice itself is quite lovely of course. Dramatically she's the complete opposite of Paul Agnew who plays her lover Abaris with superb delicacy and beauty of voice - with Agnew the acting and drama is all internal, and he seems surprised when he finds himself interacting with other people. Bonney is radiantly outward focused, reacting to and truly interacting with everyone and everything, especially touching and real in the final act when it is revealed that she is allowed to marry her lover.

The rest of the cast is good. Laurent Naouri is a bit hyperactive and small voiced to be really scary as Borée though he sings idiomatically and well. Toby Spence makes a horribly affected prince and a nicely sung one too. Stéphane Degout as his brother Borilée is a less accomplished singer and doesn't register so clearly as a character. Nicolas Rivenq makes a good Apollon and Adamas.

One can only be thankful for living in an age where William Christie conducts Rameau with Les Arts Florissents. All I can say is that this is music making of the first order* - exciting, characterful, sensitive, intelligent, beautiful. Truly beyond praise.

One really irritating aspect of this DVD is the terrible English subtitles - all theeing and thouing, often with very awkward word order. This makes them difficult to follow and while watching I spent far too much time trying to translate them into real English.

This video shows some of my favourite dance music in the opera - the first piece is the gorgeous Entree from Act IV, and then that charming and wonderful Gavotte for flute and bassoon, and then the final number with its rhythmic dislocations. You see also quite how brilliant the playing is in this production.

*At the moment we are actually lucky enough to have another Rameau conductor of the very highest level: Marc Minkowski