This was the first opera of the Glyndebourne 2013 season, and what a magnificent start. Amazingly, the last time Glyndebourne staged Ariadne auf Naxos was in 1981, surprising because it seems such an ideal work for the house. Director Katharina Thoma seems to realise this connection and sets it in a English country house during the Second World War, where a rich gentleman has decided to put on an opera in his house (therefore mirroring the early Glyndebourne story). The Prologue sees the participants struggling to get the entertainment together as usual (except we see the guests taking a turn on the lawn) but somehow it falls a bit flat - Jurowski is tentative with his orchestra, the jokes are laboured, and the dramatic arc doesn't ignite fully (though the love duet is beautifully intimate). But in the chaos of the end ("Was ist das? Wohin?") a bomb is dropped on the house, and everyone rushes to safety - the entertainment is cancelled, and the Composer is distraught that real life has so painfully and mercilessly intervened with his ideals.*

The opera proper is superb though. Ariadne's scenes are difficult to stage because her drama is an internal drama - as Strauss realised immediately (we know from the letters), Hofmannsthal did not manage to invent a dramatically vivid reflection of the symbolism (nevertheless a beautiful poetic and intellectual idea), and so the meaning of the piece remains not fully realised in the final work. That said however, I have never seen Hofmannsthal's central idea so brilliantly or movingly put forward, nor have I ever been moved to care about the characters so much (my passion for the piece has thus far been largely for the wonders of the score). With the entertainment cancelled, the "opera" second act is instead turned into a real discussion between Zerbinetta and Ariadne (Ariadne, it transpires, is simply the name of "The Soprano" from the Prologue.) The country house has been converted into a hospital ward (which is historically accurate), with Ariadne a resident and Dryad, Echo and Naiad the nurses. So the piece becomes not so much a disputation of high/low art (though that is implicit in the music), and not even just about love, but about attitudes to life in the face of adversity - be it abandonment, death, war. Maybe the single common thread of Hofmannsthal's work is the conflict in life between staying principled and true to your ideals (Ariadne) in the face of life's flux, change and the constant ineluctable and mysterious transformation that we find in ourselves (Zerbinetta). Ariadne is a real woman shattered by her abandonment (we might infer that Theseus may actually have been killed in the war), but Zerbinetta explains that life must go on, and besides there's so much fun and fulfilment to be had. This attitude to love/the erotic is mirrored in the entire Commedia dell'arte troupe's attitude to the war - they dance with the residents and generally muck around in the face of the horrors of war - making do, laughing because the only other option is tears. 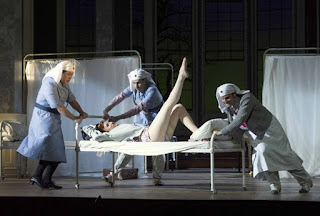 I've never been so convinced by Zerbinetta as a real flesh and blood character - Laura Claycomb lives and breathes her ethos of enjoyment, flux, change without resorting to shallowness - the emotions and pleasures are real, they just also happen to be fleeting. Her imploring of Ariadne to change is for once heartfelt, and her subsequent saucy antics convincing and non pornographic (that is, emphatically not for show) - her Joie de vivre, joyous sexual freedom, generosity of spirit, and warm heartedness are all palpable in every gesture. The sense of jealousy that the others feel when she finally chooses her man from the Comedy troupe is also keen and sad - we see the cost of freedom, and the deceptions we tell ourselves about why we are not more romantically successful are laid very bare. Hofmannsthal's beautiful language resonates fully at every turn - the positive effect of a German director who really understands the words? What a shame then that the surtitles are so poorly translated - often not just clumsily, but incorrectly - a rare lapse on Glyndebourne's part, particularly painful in the circumstances when for once text, music and drama are working so well in accord. 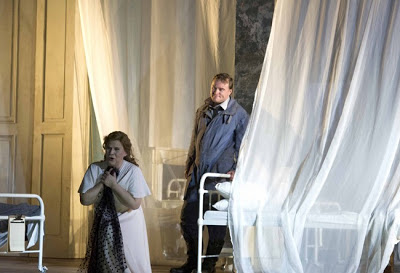 When Ariadne returns she is ready for death. Bacchus is just a man (as he keeps telling her) but notices that she is a very distraught and tortured woman. His simple act of total empathy for a fellow human being is enough to save her from her despair and begin the process of transformation and recovery for her. His potentially cheesy words "Dann sterben eher die ewigen Sterne, Als dass du stürbest aus meinen Armen!" (roughly "The eternal stars will die before I'd let you die in my arms") have never been more touching, meant or hopeful. And through her transformation and blossoming into love, he, against his own expectations, is also is transformed in love - he has found solace from war in providing comfort and showing love for another human being.

This all sounds very high minded, but in Thoma's production, at every point the symbolic meaning hits home and becomes moving on a human level. Though laughs were effortful in the Prologue, the thoughtful character regie and attention to detail in the main opera means that it is consistently amusing, poignant, gripping. I mean, the three nymphs as nurses sounds twee and sort of filled me with dread when I first saw it, but it just works so well. Thoma also takes very careful notice of the score - the mood, tempo and texture - and closely matches it with actions and visuals. Such a rare thing to see done well.

Musically things are very good indeed. Conductor Vladimir Jurowski, in his final season as Glyndebourne's musical director, shows once again why he will be so sorely missed. As I said, the Prologue felt undernourished and lacked momentum, but once we got to the Opera proper, Jurowski presented us with a treasure trove of delights. I haven't heard it felt so convincingly to be a "chamber opera" as in his hands, and the "numbers" so well integrated into the dramatic whole - the thing rolls forward with a pellucid lightness and a refreshing, vernal beauty, sections melting into each other, the contrast between the seria and buffa sections wonderfully hazy. It's a great achievement and just as the production made me see the drama anew, the conducting and playing made me hear the music anew. The binding of aural and dramatic aesthetics is total.

The cast is very strong. Soile Isokoski is a far more moving and engaged actress than I thought she would be, having read many of her previous reviews in other roles. She is fully in the line of silvery, shimmery Ariadnes - the Lisa Della Casa school if you will. The voice is not quite in its prime any more, but is still very beautiful indeed, and after some slightly spread top notes in her opening scena, she got better and better, and in the final duet produced some glorious singing. Ariadne is role that has frequent excursions beneath the stave, and I was pleasantly surprised at how matched Isokoski's chest voice was to the rest of her instrument- it's not particularly rich, but it is very present and well integrated.

As already mentioned Laura Claycomb embodies Zerbinetta very movingly too, but vocally she is also excellent. It's not always the most effortlessly beautiful voice, but the legato is simply superb, and her musicianship gives her singing a great beauty and expressivity. The very highest notes (all those E6s!) are a little harsh, but it's a small price to pay when the rest is so good: generally the voice is warm, pliant, the coloratura accurate and smooth. Kate Lindsey is a pleasing Composer (both her first time in the role and like the other principal women, her first time at Glyndebourne), possessing a very rounded, well integrated sound with a beautiful soprano like top. She acts the part well. Often the timbre is so shiny and rounded that the diction suffers, and the voice is perhaps a shade small in the climaxes but this is a lovely début.

There are no really weak links in the rest of the cast. The nymphs' music appears as a particular musical highlight (usually such a bore!), very richly and beautifully dispatched by Ana Maria Labin, Adriana Di Paola, and Gabriela Istoc, and their acting is great. Thomas Allen is his usual best as the Music Master, the four comedians (Dmitri Vargin, James Kryshak, Torben Jurgens, Andrew Stenson) better integrated and also more beautiful sounding than the usual character singers we get in these roles. The big one I haven't mentioned is Sergey Skorokhodov in the thanklessly difficult and demanding role of Bacchus. He really wasn't bad for most of it, but by the final phrases he was clearly ailing, coughing once between phrases (was he ill?), and not quite managing to get to the end with all engines blazing. Still, there's plenty to admire in his singing, and one hopes he will improve throughout the run as he acclimatises to the role.

You'll notice that I use the phrase "never before" a lot in this review, because so many things are revelatory in this production. Overall then a brilliant start to the season, and I cannot wait to see Falstaff next Friday.

EDIT: Mark Berry @Boulezian, who takes a diametrically opposed view in his assessment of this staging in his review, raises concerns that Thoma raises some laughs by using Zerbinetta's supposed mental illness as fodder (and further also suggested on twitter:  "Misogyny of Thoma's Ariadne: woman sings high notes, therefore 'mad', thus molest and straitjacket her, therefore she is fodder for hilarity"). Tim Ashley at the Guardian makes related allusions. This would obviously be very serious and offensive if it were the case whether intentional or accidental, but I must register my disagreement with this analysis. To me, the fussy nurses are not "the voice of Thoma", but the "voice of conformity and prudishness". They don't know how to deal with a woman who is so unbeholden and enjoys/understands her sexuality so thoroughly, and seeing the world through 1940s medical eyes, attempt to straight-jacket and sedate her (all brilliantly choreographed and sensitive to the changes in the music in my opinion) - but she's not held down for long and soon escapes to have fun with her men again - there's was no sense at all I thought that Zerbinetta was either a) genuinely mentally ill, or b) being disapproved of by the production as a whole (indeed, quite the opposite). Opinions will vary of course, and everyone will interpret what they see from a different perspective, but I was so surprised at this analysis, that I just had to write my "version of events".

*disturbingly, lots of audience members guffawed when the bomb was dropped, and chuckles were also heard when a patient had to be sedated because he was spasming in his sleep in the aftermath of some unspeakable horror. I couldn't quite believe it.
at 03:07