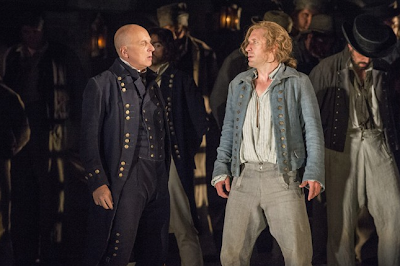 It's for evenings like this that the word Gesamtkunstwerk was coined. When all aspects of a production resonate together as coherently and powerfully as they did here, you remember again why it is that you sit through the many mediocre or even merely good opera performances: there is simply nothing as magnetically engaging and shatteringly powerful as this art form when it is done right.

On CD, Billy Budd can be a hard listen - the booming all male cast can become oppressively unvaried timbrally and the score is one of the toughest and least ingratiating that Britten had written by this stage of his career (1951) despite some magnificent moments. But in this production/realisation of Britten's opera these concerns don't even arise: director Michael Grandage (with excellent revival direction by Ian Rutherford) and designer Christopher Oram have conspired to produce a show where stage and score are in perfect equipoise; the visuals become inseparable from the sound, the set a resonating chamber for the music, the music losing all sense of formal or aesthetic procedure and instead becomes the drama, atmosphere, characters. I have previously watched the production on DVD and was not that enthralled, but comparison to this live show shows how woefully inadequate the transfer from stage to screen can be and how different they are as mediums.

The set consists of a view into the hull of HMS Indomitable, the ship on which the sailors find themselves, rendered in Oram's designs with awesome grandeur and beautiful attention to detail. The ship envelops the men and indeed the entire theatre like a huge womb, every surface bowed, curved, and it is hopefully not too fanciful to suggest that "she" provides the feminine element of the production. Changes of scene are achieved with the simplest of means - the rafters descend to create the cramped conditions of the lower decks, and for Captain Vere's cabin the space is transformed by the addition of a few windows near the front of the stage. Just as often a change of scene is managed using lighting, Paule Constable proving once again that she may well be the best lighting designer we have on these shores - it would be a very different production without her expertise. The brilliance of this design is not just that it looks and feels so atmospheric; the fact that the ship remains stationary and virtually unchanged throughout offers a very strong psychological underpinning to the production - the vessel is inescapable and claustrophobic, but also strangely comforting - the men cannot leave the ship, but they are also wedded to it and bound together by it. The character regie is simple and fairly traditional, but totally engrossing because it's so carefully observed and specific - there are simply too many touching moments to mention, but every relationship feels not just believable but fully real. 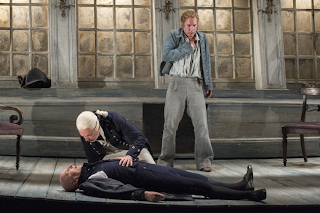 Musical values are very high indeed. Andrew Davis must be thanked in large part for allowing stage and score to blend with such choreographic and psychological precision - with conducting like this, suspension of disbelief is almost not required, so transported are you by the events that are unfolding. Singers are always fully audible and ideally supported by the superb playing of the London Philharmonic Orchestra, and orchestral textures, whether glowering or shimmering, unfailingly make a dramatic as well as musical impact. The cast is uniformly of a very high standard and the whole thing is a real ensemble effort. In the choral scenes, the men's voices seem to emanate from the very bowels of the ship and the climaxes achieve a thrilling, sometimes brutal power. Jacques Imbrailo's slightly fluttery and youthful sounding baritone makes him a very distinctive Billy Budd, and his barely contained youthful ebullience and radiant, almost feminine energy, make it easy to see why he is so attractive to the other sailors. Brindley Sherratt, continuing a string of operatic successes, makes a wonderful Claggart, restrained and fearsome, the voice appropriately oleaginous, opaque and orotund, beautiful, even seductive. One of Britain's finest singers. Mark Padmore's gentle "starry Vere" is not as beautiful of voice as he might have been earlier in his career, but this opera is hardly about bel canto, and his is a touching and expertly sung assumption of the role. I know I'm meant to give balanced criticism, and mention negatives along with positives, and I could name a couple of minor cast members who convinced me slightly less than the rest dramatically, but it would be cavilling in the face of a truly brilliant ensemble achievement.

What an extraordinary end to the Glyndebourne season.