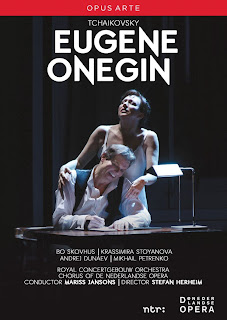 
This is not an Onegin for those that haven't seen the piece before - it's not impenetrably complex, but a very good knowledge of the "standard" narrative would help hugely in unravelling the games being played here with plot and memory. It opens on a brilliant coup de theatre - a "split screen" introducing the the dual worlds that are being depicted in this production - the Russian oligarchy of today, and a sentimentalised kitsch vision of peasant Russia. It's not totally clear why Tatyana remembers her youth as occurring so long before it actually did though; perhaps Herheim is suggesting that Russians sentimentalise their own history and youths? Olga is a vision of naive peasantry, youth and happiness - a reminder to Tatyana of what she has left behind as we see Tatyana amongst her high society guests. Olga's aria becomes accusatory, or at least some sort of expression in Tatyana's guilt.

The letter scene is presented as the fulfilment of Tatyana's wish (Onegin is present, at least in her mind), and simultaneously, Onegin writing his letter with the same message to her as he does later in Act III in the conventional narrative. (Though of course we don't normally get to see it on stage, reference is made to his letter in the final scene, and Onegin gets the same letter writing music when he realises he's in love with Tatyana). We already know this second letter writing event happens, so I'm not sure how much of an insight this is beyond the initial surprise of the new staging. For newcomers it'll be totally baffling and inexplicable. It's tempting to have Tatyana address the actual Onegin onstage because the letter is doing this, but for me, the sense of the unknown is what makes this scene so moving and tense - we know she is fantasising - do we need to see the fulfilment of this fantasy onstage? Still, it's much more subtly and discreetly handled than the comparable version in Kasper Holten's dramatically null ROH staging, the first of many parallels between the two productions (not all of which I've mentioned here). I also didn't quite get what was added  in the following scene by having Onegin address his rejection to a double of Tatyana- yes we get to see the older Tatyana reliving the scene, but by this stage the theme is so clear, that it's weird to just get the same thing again, especially when the double Tatyana (a dancer) is so bad at acting.

Herheim sees the whole piece as being about the loss of ideals - most obviously Tatyana and Lensky's loss of the ideal of innocent romantic love - and mirrors this in the staging with the loss of the big ideals that Russia has suffered during the 20th century. At the end of the Larina ballroom scene Lensky seems to embrace Tatyana's little red book - replacing his naive poetic Romanticism with Communism, and he goes on to direct some troops to exact his revenge on the crowd. But soon the star of Communism is seen in flames and then smashed on the floor during the duel - the communist ideal being replaced with Onegin's playboy Capitalism and the rich Russian oligarchs of his world. It's interesting that Herheim makes these parallels, but what is it actually adding dramatically here? Again after the initial surprise has faded and we've worked out Herheim's code, I can't help feeling that this is a little jejune. Perhaps I'm missing a subtlety.

The Larina ballroom scene is somewhat clumsily staged and the revolving room feels artificial almost the whole time. Maybe it was different in the theatre but the feeling of larger and smaller spaces that the set design is meant to enable doesn't really come across - the pure aesthetics of the "stage picture" are probably the weakest aspect in almost all of Herheim's productions. In the intro to Act III we get a view of 20th century Russian cliches as seen by western Europe (which gets a round of applause from the audience!). Gremin reappears at the end of the final duet (again just as in Holten's production) as does the rest of high society at Gremin's instigation, who witness Onegin's failure, shame and impotence.

Krassimira Stoyanova, in her role début, gives a radiant account of Tatyana, with committed acting that serves the staging very well. She has a little trouble convincing physically as the young Tatyana, but this production plays so much with time frames that this isn't a huge obstacle. She has a rich chest register, warm middle and lovely top, and sings with expressive nuance and technical expertise. It's a very beautiful timbre and sounds great up close on the mics, but the top is very covered which certainly doesn't sound as good in the theatre and was one of my main reservations about her in live performance earlier this year that I saw in the Holten ROH production. Still, a remarkable debut.

Bo Skovhus is a classic barihunk; possibly only Hvorostovsky is better looking of the major international baritones. He often moves awkwardly on stage, hunched and stumbling, which works reasonably well in this production with its characterisation of Onegin as constantly being on the back foot. Vocally he is entirely adequate, but he is not a first choice with all the excellent Onegins currently performing. Skovhus has a passing resemblance to Herheim himself looks wise, but weirdly so does tenor Andrej Dunaev, to an even greater degree. Again he's more than acceptable in the role, but the timbre is not the most beautiful and one might wish for a little more nuance from a character who is meant to be a poet. The rest of the cast are all more than acceptable.

Mariss Jansons gives a slightly weird account of the score, extremely lush and beautifully played by the Concertgebouw Orchestra, but somehow too polished and smooth to sound truly Russian. Where's the raw Slavic soul? A nebulous and intangible criticism perhaps and few will complain when the playing is of such high quality.

The first ten minutes of this production had me thinking that this might be one of the best DVDs on the market, but overall, though very enjoyable, I'm not sure that the interventions add enough to our understanding of the piece for this to escape being an egoistic project - too often I felt this was merely "Herheim's Onegin". That is the production made me think of Herheim rather than the opera, and for me for Regie theatre to be successful, it has to reveal the piece to us anew and bring us closer to the work and its meaning, rather than being a canvas on which the director is allowed to exercise his fantasy, however well intentioned. There's a creeping way in which this is every bit as camp and "fabulous" as any Franco Zeffirelli extravaganza. Others will disagree, and your mileage may vary; it's certainly worth a watch.