Though both were composed for the Venetian stage, the musical differences between Giasone and Agrippina are immense. This is perhaps understandable as they are separated by a span of 60 years, but it feels like a greater divide is represented here. Giasone (1649) comes at the end of the early Italian Baroque, derived as it is mostly from Monteverdi's innovations of the early 1600s. Agrippina (1709) on the other hand is the work of a young man of the high baroque - it is very close in style and essence to the latest German Baroque of the 1730's-50's, that is Bach and Handel in grandest, fullest maturity. 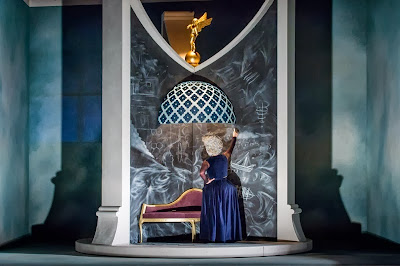 Handel represents the greatest flowering of the move in the late Baroque towards "number opera" - that is the ever clearer separation of the music into recitatives (musically negligible moments of action) and "numbers" (musically fecund reflection). From Monteverdi (where it could be argued that the text/dramatic situation is more important than displaying the singer's vocal talents), the pendulum has now swung entirely in favour of the singer - the words are commonly repeated to the point of abstraction, and are often only peripherally matched to the musical phrasing. Displays of vocal prowess and coloratura are the order of the day.

As Stravinsky so insightfully observed, Handel never surprises (as opposed to Bach, who always surprises) and the reason must surely be that his harmony is so fundamentally plain. This is not to slight Handel, indeed this is a part of his huge popular appeal, and also a large part of the effectiveness of the oratorios in the context of the cathedral acoustics they were composed for. He actually can occasionally surprise, but he does so via texture and orchestration, and his range in this increases in later years - the arias in the supreme late operatic masterpieces like Alcina have a real individuality and variety. Handel is difficult to stage, partly because of the balance between action and emotion, and partly because the pacing is driven by musical, rather than textual considerations. To put it another way, there's a hell of a lot of time that the characters have to be on stage for the quantity of text that they have to declaim, and to fill the time meaningfully without resorting to mere "stage business" requires real ingenuity and imagination from the director and performer. 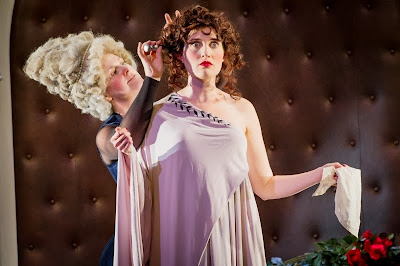 Agrippina is a splendid score, absolutely within the mould of everything else you know by Handel, and though early Handel is often a bit of a blind spot for me, I found this to be a very satisfying evening musically. I was not so enamoured with James Conway's production. Though in his programme note he professes to be a "Handel fanatic" and steadfastly believes in Handel's dramatic sense, he determinedly keeps the characters at arms length throughout this production by directing it as a comedy. The whole thing flirts with a panto like atmosphere; we are never encouraged to take the characters seriously as people and instead are encouraged to simply laugh at their vanities, pains and plots. This directorial approach is common with a lot of Baroque opera, because the stories and psychology often strain credulity. But for me ironic distancing is too glib and post modern a reaction to these problematic pieces - it's a camp avoidance of the issues an opera is trying to address, and undermines our ability to take the piece seriously as drama, or to connect with its emotional content (for a discussion of a rather more extreme case of this, see this review that I wrote about a production of Rameau's Les Indes galantes). The opera is almost reduced into an excuse for vocal fireworks - a series of "isn't this fabulous" moments. One understands the desire to avoid boredom and alienation of another sort, which is the risk of taking the opera too seriously, but the bottom line is that the direction served to distance us from the work as drama on this occasion. 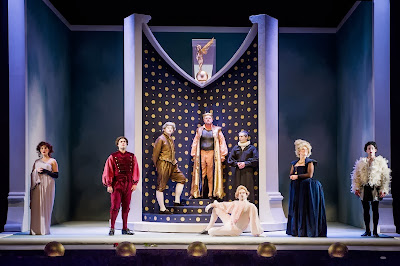 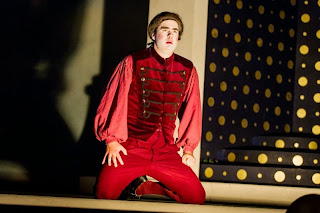 Samal Blak mirrors the deliberate artificiality of the direction with an appealingly stylish set and cartoonish costumes. Despite my reservations about the direction, the piece at least doesn't bore, which is actually no mean achievement if my previous experience with early Handel are anything to go by. We are mercifully freed of surtitles - instead we are given a short, often comedic, synopsis for each aria. There are a few moments of unexpectedly genuine emotion too - for instance Ottone's aria which has been chosen to close the first half of the show, and then at sporadic intervals in Act II also, but the winking, too knowing approach is underlined by having the evening close on a dance that redolent of the waving goodbye during sitcom credits. The modest orchestra did occasionally sound a little underpowered and edgy at times, but this is generally a fluent and charming showing from conductor Jonathan Peter and his players. 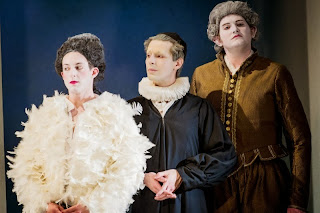 The cast is fantastic. Gillian Webster is in fairly dazzling voice as Agrippina, totally in control and fully up to the fearsome technical demands of the role. The top in particular glistens with a luscious fullness, and her unaspirated coloratura is a joy. The chest register that Handel demands of the character, as he also does with the later sorceress role of Alcina, is firmly in place, though one occasionally desires a little more bite down there, which one senses is in the voice. Paula Sides is impressive in the second soprano role of Poppea, Agrippina's schemer in training (of course ironically involved in the eponymous character's downfall), with a very attractive light lyric voice that is perfect for these girlish Handel parts. During a cadenza she delivered a quite stunning diminuendo from a full voiced forte to the tiniest pianissimo, as well as a huge descending scale, impressive in its evenness. The cast also features three counter tenors, all fascinatingly different. At first I thought that Nerone, with his androgenous costuming, was being sung by a woman, so unusual was the timbre of Jake Arditti's voice. Ironically it was the lack of chest register that told me that this was in fact a counter tenor! Generally the sound is that of a very steely mezzo (Susan Bickley comes to mind), with a large top that can turn slightly strident, and impressively powerful coloratura - all excellent for this role. A fascinating voice from a young singer whom I look forward to hearing more from. Russell Harcourt also possesses an arrestingly feminine sound as Narciso, though this time we get a slightly pinched and much gentler lyric mezzo timbre - again very unusual and great in his role. Clint van der Linde, who I had been so impressed with as Jason, was good here too, though didn't quite seem to effortlessly as ease with the music on this occasion. This is the most conventional sounding counter tenor voice of the three, possessing that clarinet like purity and hollowness that is usually so characteristic of this fach. Andrew Slater's drunken Claudio, with his at times almost spoken vocal delivery, was a nice foil in his funny casualness to the high strung antics of the others.