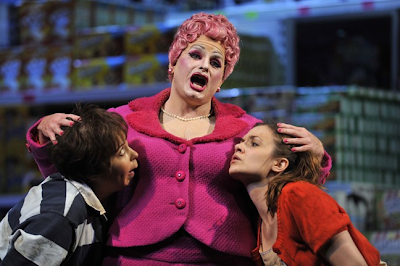 I adore this score. Its sonic opulence is obvious, and entirely fitting with the subject matter, but the manner in which Humperdinck manages to weave a Wagnerian tapestry out of German folk tunes (both borrowed and invented) is miraculously skillful, and in sheer lyrical juissance he surely outdoes his master. I also love the way Humperdinck manages to reduce to an essence the orchestral sound of entire scenes in Wagner into a few bars. Without this opera, Strauss' oeuvre would be very different indeed: Rosenkavalier is the clearest beneficiary, but even Salome takes so much from Humperdinck's wonderful score - in the case of the trills that presage Jochanaan's murder, there's an almost direct quotation, not just musically, but in dramatic effect too. It's two hours of aural delight, and though it is performed in Britain quite often, I always feel like there's a reticence by British audiences to take it seriously as the masterpiece that it so clearly is. 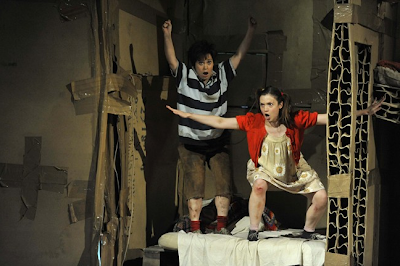 Laurent Pelly's production is an assualt on consumerism, albeit a smiling one. Hansel and Gretel are modern children, living way below the poverty line somewhere in Western Europe. Their house is a cardboard box which is falling apart. (The opening curtain is also a box - the show itself, a packaged commodity.) In this context their excitement at something as simple as milk gives the opening scene an unexpected poignance, as does the reverence they have for, and trust that they place in, their neglectful, alcoholic parents. That these children are so resilient and remain unscarred by their surroundings is the only hope that the piece offers - by retreating into fantasy, and teaming up against their uncaring world, they are able deal with their awful situation.

The forest in Act II is a bleak desert of dying trees, stripped of bark and leaves, the floor littered with waste - the effects of consumerism on our environment. Gretel's garland is made of shiny crisp packets. God knows where the kids find the berries in this desecrated wasteland - presumably they were dumped somewhere amongst all the other litter. Still the children's disposition is cheery - they know nothing else - though they still get scared of the dark. The sand man, covered head to toe in silver glitter, and saves them from their fears. After the children's evening prayer, in the pantomime dream sequence we see the 14 angels - they are model children, dressed in clean white. They gather round the sleeping Hansel and Gretel, and then get out Big Macs, chomping on them vigorously before strewing the styrofoam packaging on the floor with the rest of the rubbish. That fast food is seen by Hansel and Gretel as salvation is understandable, simultaneously funny and sad.

In Act III, having seen the effects of social and environmental effects of consumerism, we are finally confronted with the Witch's house, a veritable temple of consumerism of the most disposable, empty, meretricious variety. Barbara de Limburg's set is absolutely gorgeous here, dramatically exactly what is required by both Humperdinck and Pelly: the glitter, neon and sheer frabjous vulgarity of it does actually conspire to make something more beautiful than the sum of its parts, and virtually appears as a miracle for us and the children in light of the drabness and dilapidation we have been presented with up until this point. The Witch is rendered with horrid aplomb - initially in a plasticy pink wig and matching hot pink dress, but soon revealing the decaying body beneath - balding and morbidly obese. Once she is dispatched, the children who are saved emerge obese and barely able to move - the Witch's presence is still felt and it can't be an unreservedly happy ending. The final hymn to God feels pat and as empty as the Witch's consumerist paradise. That this is lead by the parents is ironic, as their trust in God seems as misplaced as Hansel and Gretel's trust in their parents - it was in fact the children's agile minds that saved the day, not supernatural forces. 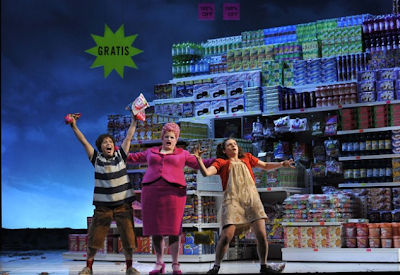 On previous outings the simultaneous comedy and darkness of Laurent Pelly's production has made this a sinister yet magical evening, but this revival with the present cast, with direction by James Bonas, lacks Pelly's eye for comedy and truth in tiny details. The result is a slightly lacklustre affair. There's nothing wrong per se, but something didn't fully catch light, at least the evening I went, and there were a few moments of tedium where the action didn't sustain enough interest. 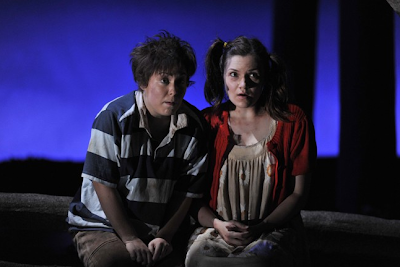 The singing is largely very good. Most remarkable perhaps in Victoria Yarovaya's Hansel whose physical performance is uncannily boyish, and whose voice glides beautifully through the vocal writing with real character. Andriana Chuchman is up to this standard too, blending wonderfully with Yarovaya and is cheekily charming as Gretel. Anne Mason is a let down as the depressed mother - she doesn't seem very committed on the acting side of things, and the voice is betrays a similar lack of dramatic involvement. Stephen Gadd is much better as the father, his large voice ringing out with brilliance during his drunken antics. Colin Judson was variable as the witch - there were moments of great vocal characterisation, but he took a while to warm up vocally (not ideal in a 20 minute role), and acting wise he seemed in limbo between panto dame and truly sinister child-cannibalist, and one willed him to be directed more along one way direction or the other. The Sand man is vocally strangely undercharacterised by Lauren Easton who seems embarrassed by the "st" sound effect moments that Humperdinck writes between phrases, rather than relishing the possibilities they might present.

The orchestral playing under Ilyich Rivas was wonderful - gorgeous details constantly emerged from the pit, the music's honeyed glow flowing out like spun sugar. There were occasional pacing issues in the first act - a few passages were rather speedily dispatched, which robbed a couple of climaxes of their full impact - but largely this was a very lovely effort from conductor and players.

For those who have never seen the production or opera, there may be enough here with the lovely music making and interesting interpretation to allow you to leave satisfied, but that small but vital spark of stage magic was missing on this occasion for me.