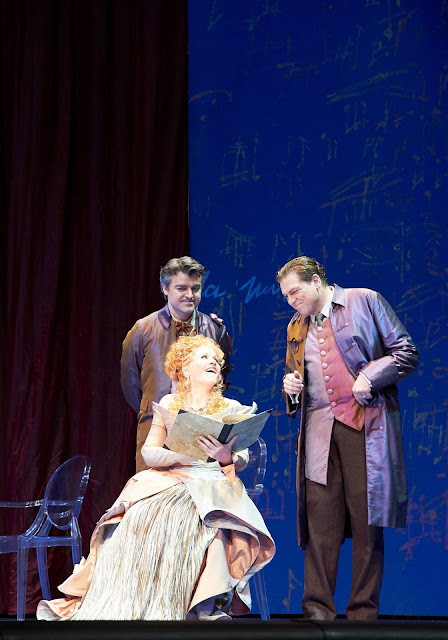 [NOTE: if you're looking for the 2013 ROH Capriccio with Fleming, look here.]

Strauss' final opera Capriccio, the piece for which my blog is named, almost means too much for me to give an overview of why I value it so highly. The temptation would be to list every detail, every felicity, so when I have more time I will write up my thoughts into a coherent structure - since there are a couple of ROH performances coming up, that will provide a good deadline. For the time being, suffice it to say that this piece represents an exquisite final flowering of Strauss' operatic career, an unexpected return to the brilliance of the Salome - Elektra - Rosenkavalier - Ariadne period after approximately two decades of relative mediocrity (the best bits of Arabella and Daphne being the principle highlights that soar beyond the meticulous humdrum of most of his work from the 1920s and 30s). It ushers Strauss' late harvest of works of which the Four Last Songs are the most famous and celebrated and is every bit as recherché and exquisitely crafted as the songs. 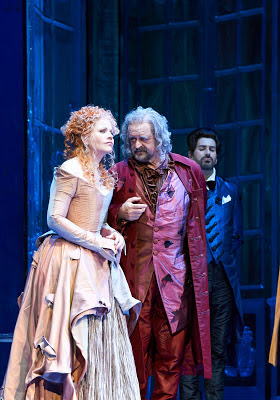 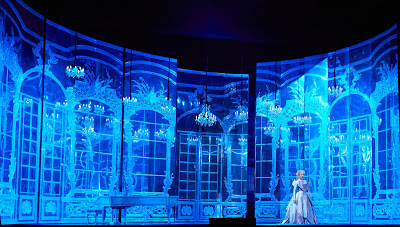 This was a frustrating show because it was almost so good in every way. First, let's consider the design. From the photos above you'd be forgiven for thinking that this was one of the most visually alluring productions you're ever likely to see, and it certainly has its moments. Visually this show is best when the lighting is very focussed on the singers bringing them into heightened, luminous focus (as in the photos above, and a few others here), and I love the idea of a Capriccio in slightly surreal, glimmering half lights, as its so different from what I hold in my minds eye when I listen to the work. However this only happens occasionally, and all too often the singers and set are covered in a haze of blues, lilacs, oranges, yellows and pinks, and there are just too many colours and textures for the aesthetic to properly congeal, let alone be stylish. The last scene for instance, contrary to the neon beauty of the photo above, has much of its stark luminescence vitiated by very diffuse gels on the lights that nullify the intense colour, and do no favours to the set. We'll see how it looks on camera* as shows can look very different on the little/big screen to how they look in the theatre. 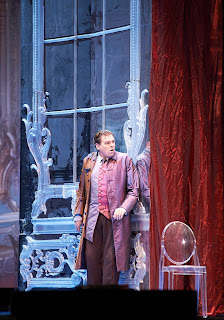 Second, the direction. The main set components of Marco Arturo Marelli's production (he designed, directed and lit it) are a series of large triangular columns that each have three different faces representing three different levels of reality in the show. The visual effect is sometimes similar to Herbert Wernicke's Der Rosenkavalier. The stage opens on 1940's attired Flamand and Olivier (composer and poet) at their respective writing desks either side of the stage behind a gauze which blends smoothly from a chaos of notes to a chaos of words. Throughout the show this layer occasionally pops up but is not much developed. The principle action appears in a very stylised late 18th century setting and is presumably the opera that these two artists are constructing. But by teasing apart these layers that are implicit in the piece without providing obvious insights that this rending apart has opened us up to, it spoils something of this work's enigmatic unity, that special smiling glow and wistful humour that informs every bar of the score and text. Capriccio exists as a conversation piece on the nature of opera, a charming "period" romance set in an aristocratic salon, and simultaneously serves as its own explanation and deconstruction. The characters are both metaphors for the debate being enacted, archtypes, and detailed, living, believable people, whose complex desires and relationships drive the plot. It's all so artfully and effortlessly achieved that no further clarification is required: the piece itself is literally and metaphorically its own best explanation and it does it with a simple smiling elegance that it would be virtually impossible to improve upon. Marco Arturo Marelli writes with obvious love and understanding in his programme note, but he hasn't been brave enough with his vision.

This revival was very obviously very under-rehearsed. Although many of the singers from the début 2008 cast remain, they can't be expected to remember every detail in an opera as conversationally fleet footed and detailed as this without extensively re-engaging with the text, motivations and actions of the characters in this production again. It wasn't entirely clear from the booklet whether Marelli was back for this revival, but either way verbal queues were constantly missed and actions were often vague and indecisive. When Madeleine says "Fasst mich nicht an!", Olivier hadn't yet touched her, but then he awkwardly remembered he should have, and quickly grabbed her and then immediately lets go. Madeleine is meant to demonstrate the Rameau excerpt at the keyboard, but Fleming didn't get there in time, and just joined in with the offstage harpsichord way after the music has started. These are small things, but over an evening amount to a larger feeling of malaise that the singers are merely "walking through" the parts - often it seems unclear what characters actually mean by their words because their actions are ambiguous and approximate. The wonderful scenes where Olivier and Flamand declare their love were not convincing for this reason, and references to offstage action were also strangely glossed over or ignored in the acting. It's really not all bad though, characters do what they're meant to, it's not static, and there are nice touches also - the house lights going up a little when the characters all start talking about how strange opera is, adressing the audience all the while, and Olivier's cry of "Gondola, gondola!" when discussing Italian singing in the first scene, is picked up on later when the Italian Singers' duet is presented with them being carried about in gondolas. Olivier and Flamand, two sides of the same coin, wear mirror image costumes. 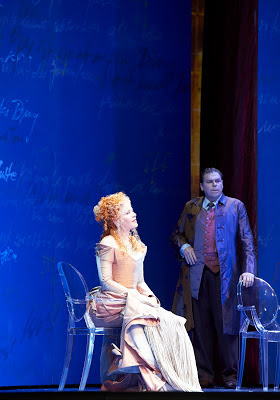 As I've said before, Renée Fleming is in my opinion the greatest soprano of the age, and when the prime was so effortlessly, ravishingly flawless, the autumn of the career comes all the more painfully. However, having seen her perform (a ridiculous) eight times last year, I can confidently say that this was by some distance the best I have seen her since I started blogging, a gratefully heard return to form. Although the timbre doesn't have the same glistening radiance that it used to, here the legato and exceptional support of the line recalled the glory days of "The Beautiful Voice", and in the all important final scene, the voice soared just as one might have hoped. Amazingly, from my seat Fleming's voice sounded larger than most of her colleagues (equalled only by Kurt Rydl), giving far more tone than I have heard her give for a long time. The textual acuity is remarkable as ever. Madeleine's tessitura sits higher than the Marschallin, but lower than Arabella, and may be her best role at this stage. Despite occasional lapses in specificity in her acting, she was the only singer to overall give a rounded and dynamic acting performance in her role perhaps because she has sung her role more often than her peers (?) but her elegance and humour and occasionally bratty playfulness all made for an engaging assumption of the part.

The rest of the cast were servicable, but noticeably not of world class standard, and for Capriccio to succeed it manifestly can not just be a star vehicle. Diction wise, I could only consistently understand Fleming, ironic since she is the only non native speaker apart from Skovhus, but it seems that the old singer's cliché that native speakers are usually more lazy with diction when singing in their own language is true. The role of Clairon is vocally a breeze for Angelika Kirchschlager but above all this is an actress's part and she made a curiously frumpy and charmless personality on stage. Part of it was her unflattering costuming, but she kept doing this thing where she'd reveal her trousered legs under her dress and it wasn't obvious whether this was meant to be a dramatic flourish or a sign of nervousness. This production makes her haughty and derisive, but there's got to be the inbuilt charisma to get away with the ill humour. Michael Schade and and Markus Eiche were vocally acceptable as Flamand and Olivier respectively, though were both a bit too much boyish swagger without offering the characters' sensitive vulnerability and charm. Bo Skovhus is hardly the most opulent voice, but was quite likeable as the playful count. Kurt Rydl's rather quizzical, sad La Roche laments the death of Bel Canto, sadly quite ironically here since the voice lacks anything resembling line these days, every phrase broken into individual words.

In the pit, Christoph Eschenbach astonishingly makes his Vienna State Opera début. It was not quite the perfect Capriccio I was expecting based on previous experiences of his conducting of the final scene, which must be ranked as the most gloriously beautiful and understanding of our time (thankfully enshrined on CD with the Vienna philharmonic on Fleming's Strauss Heroines disc.) The singers were never covered, and were followed and supported with great accuracy, and the orchestra was dazzlingly precise in its fragments of melody, but the sense of the longer line wasn't achieved until quite a while in. Since I was near the front, perhaps the sound wasn't ideal - I'd be fascinated to hear how it sounded higher up in the house where the sound it better. The final scene was as wonderful as ever though.


Overall I enjoyed this, and found it worthwhile despite its flaws. 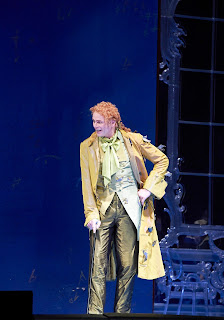 *This production is being filmed for DVD (EDIT: though there were doubts about whether this was going to be released, it is, very soon!) which means, extraordinarily enough, that we will have three Fleming Capriccios on DVD. The Carsen 2004 production with Fleming in her peak voice is still the one to have as overall as it is the best directed, has the best supporting cast, and is the most visually beautiful. The Met DVD of the abominably drab Cox production which is the one wheeled out in most English speaking nations (in 20s/30s or "period" dress) finds Fleming at her most affected dramatically, a none too exciting cast, and of course the Met's horrible video direction (review here). The Marelli production is decent, but Oh how I wish we could have had the 2008 première when the cast were all newly rehearsed, and Fleming was in her prime. However, we can't have everything, and must be thankful that we are having it at all. Hopefully, over the next two evenings, the cast will hit their marks more often and they'll be able to patch together a convincing realisation of the staging. Also perhaps close-ups will help make the thing feel less "bitty". It will broadcast live on the internet on 27th June 2013. 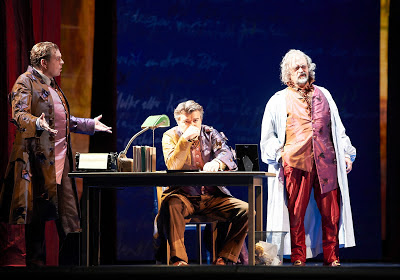 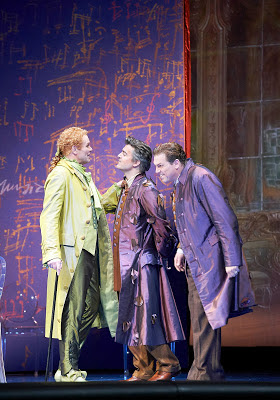 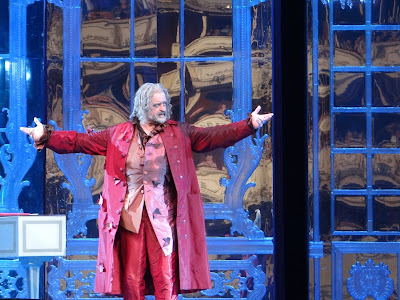 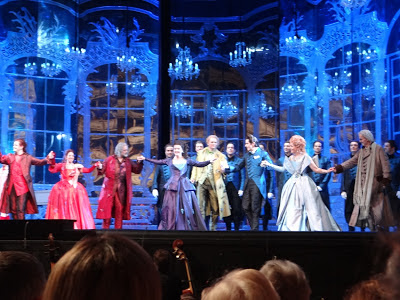 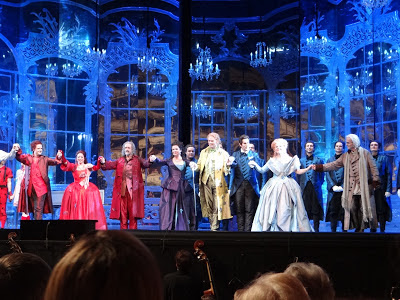 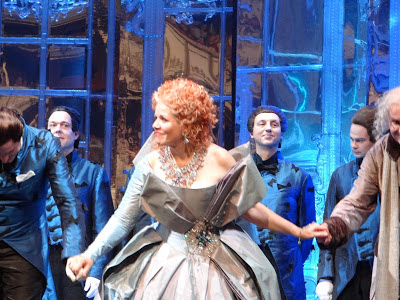 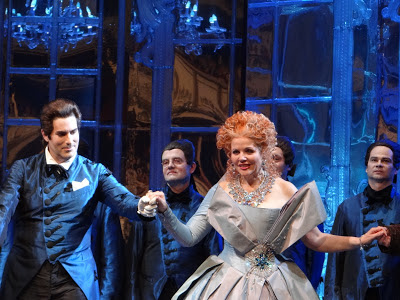 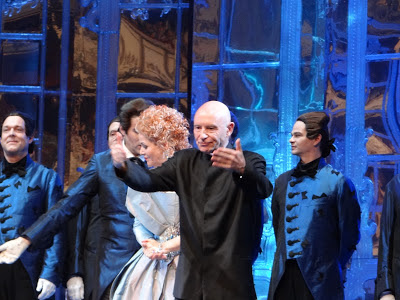 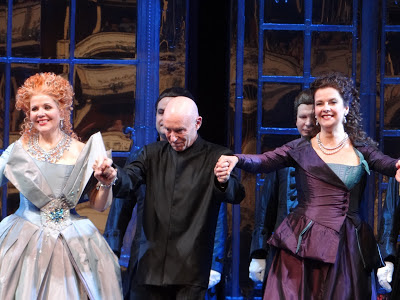 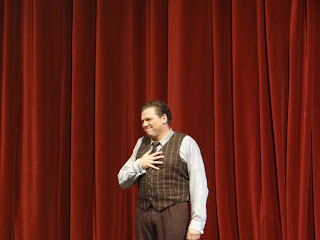 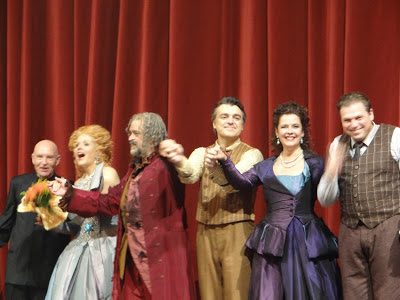 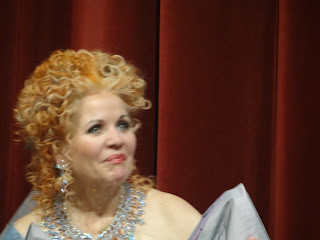 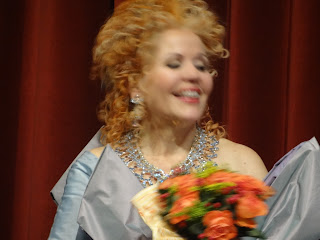