It has become a tradition in reviews of Owen Wingrave to begin by renouncing the "commonly" propounded view (by whom?) that Owen Wingrave's relative rarity in the opera house can be explained by the fact that it was written for TV; it is then traditional for the reviewer to proffer some other explanation for the opera's lack of "commercial" and artistic success. Fearful as I am of bucking convention, here is my stab. 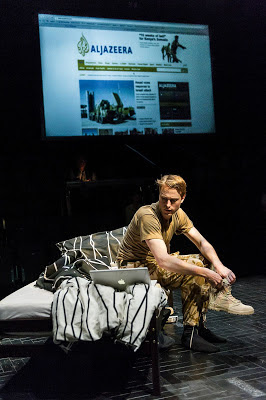 To a greater or lesser extent most artist's oeuvres can be interpreted autobiographically, but it is of course also a truism that the output of the greatest artists transcends mere psychobiography or therapeutic working out of psychopathology, even (or perhaps especially) when the work is at its most personal and self revealing. Britten is more obsessive and extremely focussed on a narrow range of topics than most perhaps, and time and again in his oeuvre the same repressed subjects are broached, probed, explored, and revisited with agonising compulsion. And so in Owen Wingrave we get pacifism (as seen in the War Requiem, Voices for Today), society against the individual (Peter Grimes), corrupted innocence and child abuse (Grimes, The Turn of the Screw, Billy Budd, and everywhere in fact), supernatural elements (The Turn of the Screw, the 3 Church Parables) and the suspicion of "otherness" - in Wingrave that Owen's sensitivity, lack of aggressive feelings and thwarting of family norms are treated with suspicion of effeminacy, weakness (and the unspoken corollary of course in the repressed Victorian moral framework of his family is the suggestion of homosexuality). I list here only the most obvious parallels in other works, but the whole oeuvre is riddled with allusions to the same themes (they receive a final, wonderfully nuanced working out in his Death in Venice which opens at the ENO soon.)

But these things in themselves do not produce great art, however passionately the artist cares for them. The central message of Owen Wingrave, "war is bad", is laughably jejune in the post war era and the way it is embodied in the drama of the opera is far too straightforward for the central conflict to be intellectually engaging - there's no darkness in the good, no truth in the bad. (As an aside, few thinking adults would not countenance that war is a necessary evil, which would in itself be a brave subject for an opera, though is not once broached as a possibility in the present opera). Britten's best operas derive much of their dramatic and emotional power from the enormous moral ambiguities he presents us with - totally remarkable in the case of Peter Grimes or Eschenbach (in Death in Venice) where we feel drawn to and moved by the plights and actions of potential or actual child abusers. It's not just that the idea is powerful, Britten needs this ambiguity to fuel his work - the subject matter of lost innocence or pacifism is not enough, there needs to be a darkness at the base of the worthy moral cause that he is banging the drum of so that he can get to work (cf. Puccini who is not at all repressed, and repeatedly and with terrible glee actively courts the comparison between his two main passions in life and art, cruelty and eroticism.) When we recognise these common "Britten-esque" elements in Owen Wingrave, but with no equivocal muddying of waters to be seen, they feel naively adolescent, by rote, expected clichés, however true or meaningful the intent. 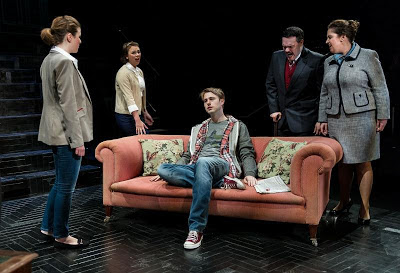 Musically then, Owen Wingrave is amongst Britten's least inspired operas, though it isn't badly made, nor is it merely a rehash of things he did better elsewhere (the ubiquitous treble voice does appear, and is the only musical lapse into self-cliché.) The score is unremittingly dark, abstruse, unlyrical, and generally avoids the extraordinary diamantine brilliance and beauty of surface that is Britten's norm (at least up until the Curlew River of 1964). Percussion plays a big role in the orchestra, framing and reflecting the general hardness and lack of colour. The only extended "lyrical" passage in the opera, Owen's exhortation for peace, feels hard fought for, and the beauty is not in the vocal line which anyhow soon turns into pure vocal declamation. The shimmering orchestral chords that underpin this section aren't exactly lyrical either, rather lapidary, glittering, darkly majestic. A lack of inspiration in the basic musical invention is the main problem throughout, and Britten's usual emotional restraint is only very intermittently marshalled into genuine sentiment and complex feeling.

The central thrust of the story is very simple - Owen decides that he can't be a soldier, and then we witness the fallout with his very traditional war-abiding family. Strangely there's a supernatural room in the family home where a previous abuse has occurred, which (apparently genuinely) has cursed the room, and becomes the eventual demise of the eponymous non-hero of the opera. All the arguing and crushing disappointment is in fact almost fun to watch in Kelly Robinson's production, who does the very best he can with his materials, convincingly updating it to the present day with Owen becoming disenfranchised with the English/American abuse of power in Iraq and Afghanistan. The house becomes a symbol of the oppressive family with its generations of virile war lover toffs, and is evoked with the most minimal means in this "in the traverse" setting. Video elements work well because they add atmosphere and context without having to do any dramatic heavy lifting, and the rest of the stage is left bleak and empty, which feels in line with the score and allows us to focus fully on the characters at close range, every one of which feels believable and detailed in the slightly unreal and reductive context of the libretto. Anyone who has spent time with the British upper middle classes will recognise plenty of truth in here.


The production uses a reduced orchestration by David Matthews which serves the present purposes well, orchestra, singers and conductor all proceeding with impressive assurance into these relatively uncharted and uninviting waters. The cast all acquit themselves admirably, singing and acting with clarity and force. The trio of ladies closest to Owen are all harridans and variously all display unappealing sides of the same privileged, nationalistic attitude. Roisin Walsh is magnificent as Miss Wingrave in her strident pomposity and convincing school-marmy disapproval, presenting a complete character in voice and actions. Raphaela Papadakis as Mrs Julian, embodies the tottering glamour of a Stepford Sloane, sweet of voice, all guilt trips, simpering looks, and sententious appeals to good honest Daily Mail morality. Her daughter Kate, given a very strong vocal performance by Catherine Backhouse is almost scariest of all - the sincere yuppie Torygirl - her final words to Owen "Oh, your beliefs! Why was I not a man?" (superbly rendered in rich chest voice from Backhouse) say it all, and a decade before Thatcherism! 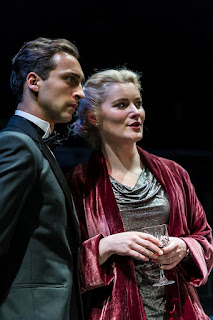 Only Mrs Coyle (sensitively sung by Samantha Crawford) offers some motherly warmth and understanding, and she is the only one who is prepared to entertain a view dissimilar to her own. Her husband Spencer, partially comes round too, but is revealed to be powerless for all his military might; Joseph Padfield is impressively stentorian and brusque in the part. Lechmere's public school boy "nice but dim" ebullience is nicely captured by Adam Smith, and Gérard Schneider presents an extremely convincing portrait of a bellicose and irascible patriarch in General Sir Philip Wingrave - I was particularly impressed by the ease with which he rendered the music as heightened speech in his impetuous tirades against Owen. Benjamin Appl acts the part of Owen nicely, playing him with softness, gangly teenage slouchiness and also a curious mix of stubborness, steadfastness, and slight lack of confidence. Vocally he does quite well too in a challenging role, making up for a slight lack of vocal colour with appealing ardency and commitment.


All in all then, this is a very serviceable account of a very problematic opera, and for the Britten lover in this centenary year, it offers a rare opportunity to see staged one of the more shadowy and difficult corners of the master's output.