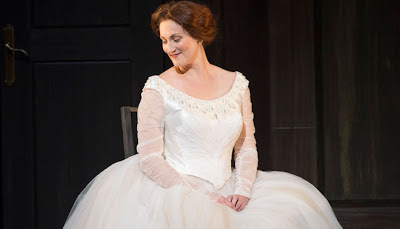 Wagner's steady journey from talent to genius is a very satisfying development to follow. The marked improvement from each opera to the next, both in the level of the greatest music, and also in the ratio of good to mediocre is so consistent that you have to marvel at the ability and willingness to learn from mistakes, the commitment to his native talent which was hardly precocious or even particularly promising at first, and his following through of a singular vision to conclusion in each work even when he might have moved on artistically by the journey's end. Lohengrin comes right at the cusp of his full maturity - it's his last opera that feels fully at the heart of the Romantic tradition rather than a highly singular development of it* (however radically he has moved the genre on), the last that he wrote before fully setting down on paper his idea of the Gesamtkunstwerk, and the last opera he composed before the fateful meeting with King Ludwig II of Bavaria.

The level of inspiration is very high and the music that attains genuine greatness far outweighs the merely bombastic; certainly there is a higher percentage of good to bad than in Tannhauser, which in turn had a higher percentage of good to bad than Der fliegende Holländer. The range too is greater than ever before - the diaphanous radiance of the opening "Ferne Land" music in the overture (which reappears throughout the opera) is a wonderfully successful experiment which he learned from but never repeated with such purity in the rest of his work. The way it very gradually, almost imperceptibly, builds from intimacy and tenderness towards it's climax is also a sign of things to come. On the other side, the "public" grandeur of the choral writing is overwhelming at times, though this is a direction that Wagner found it hard to incorporate into his later operas, Meistersinger aside, which is the most obvious fruit of this music's promise.

This is all to say that in this WNO production of Lohengrin, we feel the work resonating at the heart of his output as it looks forward to the mature music dramas in theme, scope, and more than occasionally in the music, and backwards to German Romantic opera in form, plot and structure, and once again, just as often in the music. The production's setting of the 1840's attempts to put it politically in the context of Wagner's time of composition: soon after writing the opera, Wagner was involved in politically dangerous activities that had as a goal a Germany united under new leadership. In Lohengrin there is a crisis in society caused by an ambiguity in leadership, so the parallel that is trying to be drawn is obvious. It's an interesting idea, but not fully realised in the staging, and the resulting design can be quite ugly and inelegantly achieved - Antony McDonald's sets feel constrictive and confining in terms of the range of movement they offer and the grimy "realistic" finish can't cover a fundamental lack of believability (why are these people, experiencing these significant events, meeting here rather than anywhere else?) or beauty. Dilapidation derives its effect, meaning, and charm (or horror) from its context - the original edifice has to be grand and magnificent enough for the fall to have its piquancy. 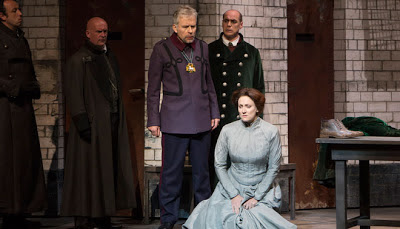 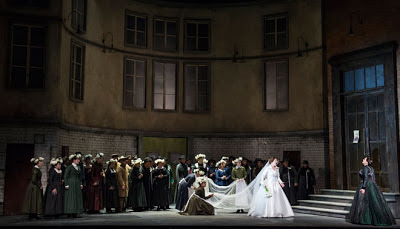 Where this production really succeeds is in the detailed and believable character relationships, subtly suggestive, touchingly acted, and never melodromatic even when the plot is at its most contrived (McDonald, known primarily as a designer, paradoxically succeeding much better in his other role here as director). The first act falters a little as Matthew Best's Heinrich der Vogler seems disconnected from everyone else despite convincing vocal contributions, and unfortunately Simon Thorpe's Friedrich von Telramund is a weak link throughout in his lack of specificity vocally and dramatically. He is a cover though, brought in to replace an ailing John Lundgren, who has not yet sung a show. Things improve with the entrance of Peter Wedd's ethereal Lohengrin who instantly has an intense chemistry with Emma Bell's otherwordly Elsa - the two seem to float in another plane above the central action. This is in part due to the superb lighting of Lucy Carter who metaphorically and literally illuminates the action with sensitivity and masterful simplicity. Susan Bickley's Ortrud remains a silent presence throughout Act I, though is fascinating already due to her obvious keen emotional involvement in the events unfolding despite having no direct part in them. Haughty calmness that contains a furnace of ill will is the hallmark of her characterisation and feels just right in this production.

Act II, more interesting musically, finds the production at its best - the scene between Ortrud and Elsa shows both in exceptional voice, and great dramatic form - so much is said with so little. Then the wonder of the chorus as Elsa prepares to enter the church (thankfully interrupted so that we get to hear it again), then Ortrud's violent outbursts and dispatch by Lohengrin. The Act III "bedroom scene" becomes the emotional heart of the work, here very intimate. Elsa's all too understandable desire to know Lohengrin's background and past actions, even when it's not the reason why she loves him, comes painfully but inexorably. When she's brought to earth from her dream land at the instigation of Ortrud's questioning, it is her undoing, both in plot and as a study in psychology. 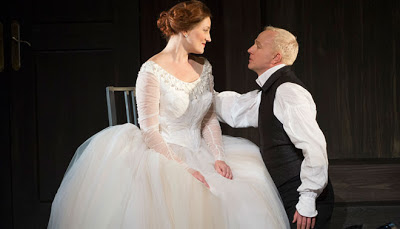 There are certain things which I heard Wagner fanatics chirping away delightedly at in the interval. First, that during the Act I ensemble for the principles it is only Ortrud and Lohengrin, the opera's extremes of character that do not kneel. So too, the humble kneeling of King Heinrich in support of Elsa, an unprecedented act for a King and therefore deeply significant of the strength of emotion he must be feeling (if only it had showed in the rest of characterisation!). Perhaps more significant on a practical level is the problematic matter of the swan. Here we see Gottfried, Elsa's brother, half swan, half boy, stuck in adolescent form, unrecognised by the others. It neatly solves the physical issue of having a swan on stage, makes the transformation more understandable and also makes more explicit and credible the curiously tender (not to say homoerotic) relationship between Lohengrin and the swan. 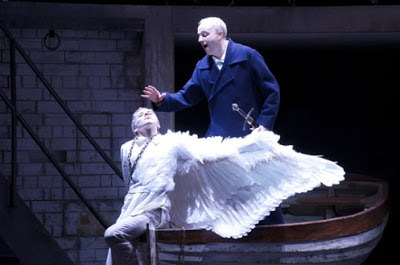 I don't think a finer Elsa could be currently found on these shores than Emma Bell. The voice is quite dark and often sounds a little "heavy" with a slightly slow vibrato and a rounded solidity that means it's not the most naturally girlish sound. But, what she does with it is just wonderful - the floated pianissimos are beautifully supported and consistent, and she can move smoothly to a full bodied fortissimo in every register with no loss of beauty in the sound. This endless flexibility and superb technical security gives her enormous freedom to be expressive: she manages Wagner's vocal writing with appealing fluidity and ease, to a degree that is rare to hear live in the theatre. Acting wise too, she creates a very touching character on stage, elegant and floating, very much in line with the vocal portrait. She took a while to warm up, having intonation issues during her first entrance, and it took me a while to get used to her full timbre, but once settled, this was a great assumption of this role. One looks forward to next seasons Fidelio Leonora at ENO with relish. 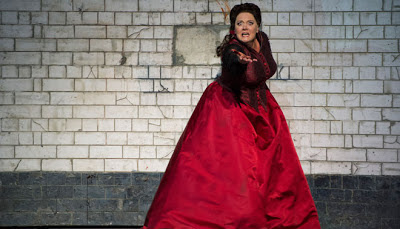 Ortrud may be the ideal role for Susan Bickley. The basic timbre is steely, incisive and forthright but like Bell, the intonation and placement is faultless, as is the control and commitment to expression. In her acting she is the fearful opposite of Elsa's dreamy girlishness - the embodiment of steely womanly strength and power, harsh, but not emotionless, and certainly never a caricatured witch figure. Peter Wedd's Lohengrin is also a fine achievement. In the Kaufmann/youtube epoch, expectations for this role are extremely high, but Wedd really doesn't suffer in this company. His "In Fernem Land" was exceptionally beautiful in the piano phrases, and though it's quite a covered sound, the voice expands to heroic proportions when it needs to. Occasionally his intonation suffered in quiet passages, especially after a bout of extended dramatic singing, but this is always an extremely testing challenge, and he will no doubt learn to manage this better as he grows into the role. Overall it's a sensitive assumption, finely acted, and he makes an ideal couple with Bell.

As ever with the WNO, the chorus sound magnificent, and Lohengrin is an opera that really shows them off. Conductor Lothar Koenigs manages the contrasts of the piece with élan, the WNO orchestra sounding exceptionally sweet in the opening (after the intonation settled down) and then reverberating with impressive grandeur in the climaxes. Once again, an extremely impressive showing from this opera house, which demonstrates that it is easily as good as the ENO or ROH when at its best as here.

Incidentally the Birmingham Hippodrome is a great place to see opera. The acoustics are excellent, you feel very close to the stage, it's situated very near to the central train station, which is easy, fast, and cheap (if you prebook) to get to from London.


*Though Götterdämmerung contains echoes of Grand Opera in the libretto, written as it was immediately after Lohengrin.
at 15:13