Death in Venice at ENO 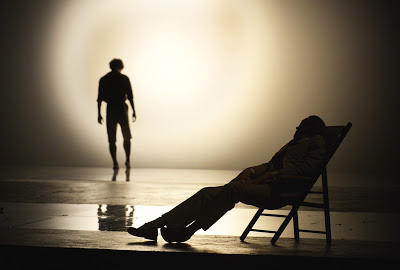 I find it fascinating that so many of the major opera composers went a similar way for their final opera - that is in the direction of thinning out, stripping back, concentration on the essentials. Strauss and Verdi slip into twinkling humour and ravishing delicacy in Capriccio and Falstaff, Mozart into a clarity, reserve and even austerity in La Clemenza di Tito, Janacek into skeletal grittyness in From the House of the Dead, Wagner into soft washes and infinitely nuanced sound clusters in Parsifal. Only Puccini stands out in trying to outdo himself on every level in Turandot. Britten then is completely in line with the main group in his final opera Death in Venice (1971-73) which comes after a period of artistic exhaustion; the etiolation and thinness of the operas of the late 60's (The Burning Fiery Furnace (1966) and The Prodigal Son (1968) and Owen Wingrave (1970)) is transformed, recast, recrystalised into a quietly masterful score that remains "thin", but lives up to the quality of his greatest operas.


Director Deborah Warner did very well to work with set designer Tom Pye and lighting designer Jean Kalman as this is an exceptionally beautiful show to watch. An idealised Venice is conjured with the simplest of means - a few side lit curtains, some basket chairs, jetty poles, a semi mirrored floor and a backlit cloth that does for an endless expanse of sky. These bright vistas are alternated with the gloomiest, most opaque representations of Aschenbach's artistic constipation - his words are projected into the cavernous dark and are barely legible as he wanders amongst them. Disarmingly simple is also how this staging deals with the canal scenes. The sense of Venice slowly drifting past as it does from the vantage point of a gondola is achieved using large rectangular buildings which calmly glide across the stage whilst the gondolas remain stationary. The other thing the production does well is in how it deals with the dance sequences. Death in Venice in my opinion features one of the most successful uses of dance of any opera. The ballet not only dramatic function (for once) but its use also has a psychological underpinning too: ballet's mysterious silence and ambiguity of  meaning maps perfectly on to the character of Tadzio, Aschenbach's unattainable and unknowable muse. As Tadzio, the young Sam Zaldivar dances beautifully, as do the rest of the boys, the choreography by Kim Brandstrup always apt and inventive. 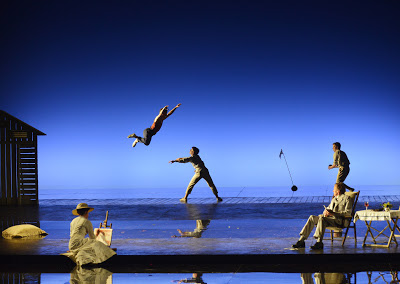 Thomas Mann's novella seems like an obvious, almost clicheed choice for Britten to adapt and operise (operate?) given his obsessions and predilections, but it's particularly poignant for the artist at this stage of his life, and for Britten, working within his repressions seems to be almost a necessity. Aschenbach's social standing, artistic credos, and dilemma is obviously very close to Britten himself: by 1970 a hugely acclaimed artist, but at a stage of life where he was artistically exhausted and so is in desperate need of a project, a stimulus, the "deep desire" the Aschenbach talks about, to revitalise him. The opening monologue is essentially autobiography:

My mind beats on 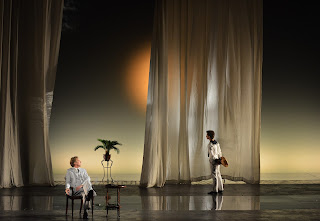 and no words come.
Taxing, tiring,
unyielding, unproductive –
my mind beats on.
No sleep restores me.

I, Aschenbach,
famous as a master-writer,
successful, honoured,
self-discipline my strength,
routine the order of my days,
imagination servant of my will.

My mind beats on,
why am I now at a loss?
I reject the words called forth by passion,
I suspect the easy judgement of the heart –
now passion itself has left me,
and delight in fastidious choice.


The boys appear soon enough of course, and even Apollo, Britten's artistic/spiritual master, makes a showing. The work is in some ways a paean to Pears as well, and through him, through the voice that Britten writes with such unerring expertise for, he crafts one of his most intimate and starkly revealing roles, though the palpable eros in the music is at all times suppressed, subsumed, submerged in the hazy gloom and twinkly mist of the score. The piece unfolds mostly as a monologue, Eschenbach narrating his mental state, and his interactions with other people feeling like painful interruptions to his flow of thoughts. The result is obviously very psychologically driven, and the line between inner and outer world is very blurry indeed.

Unfortunately, Warner really doesn't delve into these complexities very satisfyingly at all, and doesn't build an effective dramatic arc through the material. As an example, repetitions in the libretto and music are noted and dutifully staged, but not remarked upon, and we're left in the dark as to what they might mean. Both acts could have finished at any point after the half way mark and it would have felt like a legitimate ending. It just about sustains because it's beautiful to look at, but the insights are few, and dramatic momentum muddled. 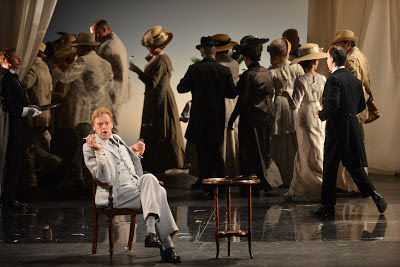 Aschenbach must surely be one of the most demanding lyric tenor roles in the repertoire dramatically, physically and musically - he carries the entire piece in all ways. John Graham-Hall barely looks 40 as Aschenbach and presents a more spritely vision of the character than we are used to. Vocally he is very detailed in his approach, every word sensitively wrought, but the character doesn't emerge fully and the basic sound is not beautiful enough to forgive the lack of characterisation. It's a very decent attempt at the part, but overall the figure that is drawn is not compelling enough. The rest of the cast are more than decent and support ably. Tim Mead sings particularly beautiful as the Voice of Apollo. It seems at the moment that Edward Gardner can do no wrong. After his superb Wozzeck he tackles Britten's score with equal aplomb and sensitivity - another great evening for him and his orchestra.