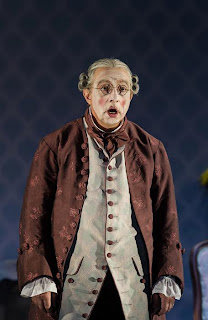 I saw this production when it was new in the 2011 Glyndebourne tour and very much liked it then. My view of the work has changed since then, and there has been a shift of focus in the direction in this revival too. I now see the score of Don Pasquale as the finest amongst Donizetti's comedies, with its constant playing with and thwarting of style, its elegant fluency and fine orchestration, and music which (for Donizetti) reflects the dramatic situation better than ever before. The programme says it's been called "Mozartian" by some commentators, and you can hear why even if it's 50 years too late (!) and not quite in the same league. The libretto and plot, heavily derived from ancient Roman comedy conventions (via Commedia dell'arte) as my companion fascinatingly informed me, is solid, engaging and well paced, if not quite as modern, insightful and eternally relevant as L'elisir d'amore. 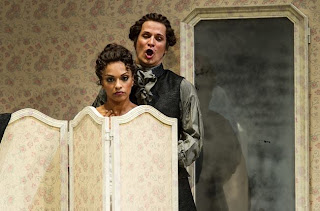 Mariame Clément's production is elegant and fleet of foot, with Julia Hansen's revolving set put to exceptionally imaginative use. I again appreciated the way the characters' clothes are reflected in the decor, and also liked how strongly each character is differentiated dramatically from the others. Clément sees Malatesta as a shady figure, all things to all men, so his double crossing of Ernesto with Norina seems fully within character and is a cruel twist. This angle is much more assiduously developed in this revival - though they no longer run off with each other in the final scene - Norina turns away from Ernesto longingly towards Malatesta - certainly not the end of that story. Don Pasquale is not very unlikeable - he's a poor old buffoon who just wants a comfortable life, and in fact he often is painted in a rather touching light. Ernesto is a clueless teenage romantic, Clément following all the queues in the music - it's clear that Donizetti is painting him as a figure to be laughed at, just as much as we're meant to laugh at Don Pasquale. The chorus are a 18th century Glyndebourne audience, picnicking on the lawn, watching the action just as we are - again in line with what Donizetti seems to see their function as. 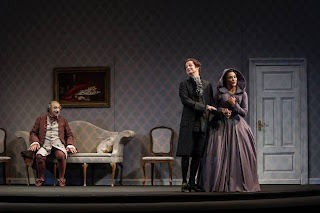 In the end, the production felt a bit plain to warrant a second viewing, but it still looks good, and charms enough that I wasn't bored. The cast are largely very good. As Don Pasquale, Alessandro Corbelli doesn't have the largest voice, but he sings with class and his portrait of the old man is endearing and nuanced. Nikolay Borchev is in lovely voice for Malatesta, perhaps a bit plain, but it seems in keeping with this production's view of the character that he shouldn't have too much personality. Enea Scala, standing in for Alek Shrader, has an excellent legato and powerful Italianate sound, so is in some ways ideal for the role of Ernesto especially when he acts it with such naive candour, but the fundamental timbre is a little pinched for my liking. 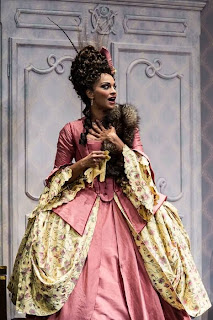 The star of the show is clearly Danielle De Niese's Norina. As bubbly and vivacious as ever, she is magnetic to watch, so at ease does she seem on stage. The voice seemed a little tight on this opening night, but the coloratura is basically all in place and I couldn't hear any aspirates, so she's at least as good as anyone I have seen live in this role. It's not the most beautiful voice, but she's always concerned with the expression of the text, another reason that she is so engaging. One thing that is lacking vocally is a trill, and it's so vital in this role as there are so many occasions when one is called for - to me it sounds like the voice is flexible enough to be capable of one if the work is put in. Acting wise, I wish she had offered a bit more range - for all her talking about the complexity of the character in the programme, more softness might have been appreciated at times - she seems just as ruthless and self serving as Malatesta, albeit in a more minxy way. Somehow Adina seemed like a better fit vocally and temperamentally when she sang it two seasons ago at Glyndebourne, but still, this was a winning performance.

The London Philharmonic Orchestra sounded absolutely glorious under Enrique Mazzola, deliciously plush, whilst remaining light and rhythmically bouyant - streaks ahead of the ROH's recent bel canto efforts in this regard. It's rare that one can comment so positively on the orchestra in a bel canto opera, but I thought they were exceptional throughout. Cello, trumpet and horn solos were all gorgeously delivered, but this was a marvellous ensemble effort. 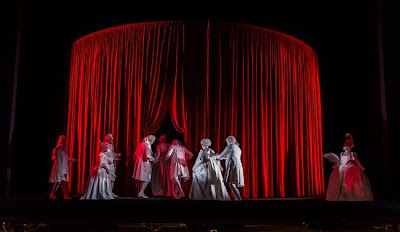