Rameau was one of the major opera composers of the 18th century and probably the only French baroque composer who surpassed Jean-Baptiste Lully, his great 17th century forebear. Already 49 when he composed it, Rameau's first attempt at opera Hippolyte et Aricie was to to be the first of over 30 stage works and although he was already a highly successful and accomplished composer, this spate of operas represents a total shift in direction and a late flourishing in which he expanded and magnified his talents beyond anything that one might have expected from what he had produced before. 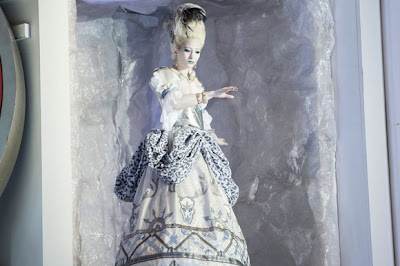 Though it's an astonishingly brilliant first attempt, and quite unlike what any of his contemporaries were doing, Hippolyte et Aricie is musically not quite my favourite of Rameau's stageworks (ardent Ramiste though I am) as his harmonic and melodic writing isn't as dazzlingly wide ranging or unbeholden as it later would be. The score is however littered with truly magnificent moments, and Acts IV and V are wholly inspired. Despite its complexity, dramatically the work is very strong and can be presented as a drama of shattering significance. Since the British public/critics have been mysteriously slow to catch on to Rameau's genius, Glyndebourne must be roundly congratulated for mounting this work, especially under William Christie, one of the greatest Rameau interpreters of our age. 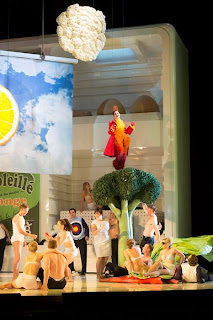 Jonathan Kent's production is mercifully far more entertaining than his dull (yet mysteriously beloved by many critics) Fairy Queen that he previously directed for Glyndebourne. The Prologue is staged inside an open fridge: the virginal Diana's chilly realm, her minions crowding around huge consumer products. Cupid, god of erotic passion and therefore her nemesis, hatches from a huge egg and is revealed to be a fiery chicken who then tries to convince Diana's followers to follow his rule. The ballet that ensues is staged with huge broccoli trees, cauliflower clouds, and an orange slice sun. In Act I, Diana's followers celebrate her peaceful nature in the chilled confines of an abattoir whilst stringing up bleeding stags - the dark background to the shiny appearance of the Prologue. Hell is the hot reverse side of the fridge, complete with flies and spiders. The mythical characters are all presented in stylised 18th century garb, whereas the mortals wear modern dress and the Act III family drama is in a normal scale Ikea bedecked house. 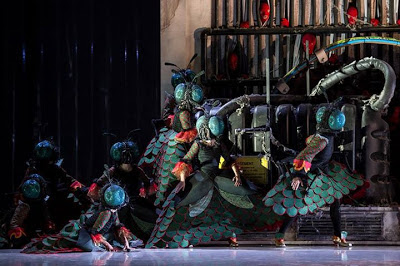 Despite the extraordinary beauty and variety of the music, Rameau's operas are often considered difficult to stage because of the extensive dance sequences, and the preponderance of classical references which would have been totally familiar with 18th century audiences can seem a forbidding obstacle for many modern audience members (myself included) who simply aren't familiar with the ins and outs of the mythology and so the characters don't always resonate with the same force, or spark the same associations as they originally would have. This production is an attempt to match the jubilant extravagance that Rameau was aiming at in his own time, and in a way it succeeds in being constantly surprising, and usually engaging. But beyond being basically internally coherent and simply elucidating the classical references (cool/hot, frigid/randy etc.) I think the piece is far more subtle psychologically than it is being presented here.

The actions of the gods are played for laughs, whereas the mortals are taken more seriously, but I'm not sure that such a simple division really gets to the heart of the matter of what is being explored here by composer and librettist. The point of some scenes doesn't seem forcefully enough presented either - as an example the jubilation of the public at the return of Theseus is clearly meant to make the personal humilations of Phaedra's failed seduction and Theseus's realisations even more humiliating and painful in that they both have to bear this hidden pain whilst appearing before an adoring public. Here the clowning of the cartoonish choreography and sailor costumes becomes the focus and detracts from the purpose of the scene. 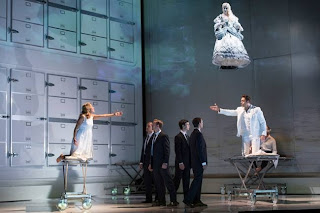 Most successful is the final Act, here staged in a morgue (an annex of Diana's domain) where Aricie and Hippolyte are reunited/resurrected by Diana and then are finally married in the presence of the goddess. Kent sees this scene as a total victory for Diana, and taking his cue from the music, the ceremony is a joyless, cold affair, in the presence of the ruined and blindfolded Theseus. Phaedra's body is brought out later and she is revived only to be tortured by endless visions of thwarted love (the ballet from Act 1, cleverly and movingly brought back here, the dancers continually thwarted in their romantic embraces). Cupid's limp corpse descends - he has been hanged - while Diana reigns there can be no erotic love for the couple. It's a very dark vision for what is nominally a happy ending, but it's very effective and makes sense in the light of the terrible fates of Theseus and Phaedra. 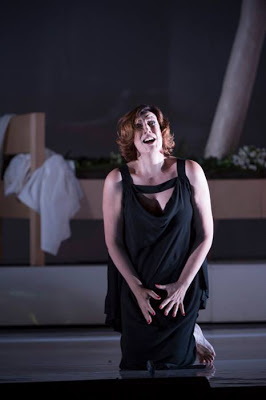 Musically this production isn't quite as luxurious as William Christie's glorious recording with Les Arts Florissants (which is an embarrassment of riches) - the small Glyndebourne chorus often simply not sounding full enough, and the orchestral sound sometimes seemed a little thin presumably so as not to cover the small voices that had been cast in many of the roles. Still there is much to admire here, and the orchestra do some ravishing things, Christie always managing to present Rameau's textures in the most surprising and beautiful light. Sarah Connolly is a very moving Phaedra, a superlative actress with a lovely voice, and she simply owns the stage in her two major scenes, the second of which is breathtaking. She is the only character who enters and leaves the stage via the pit - not something I fully understood, but somehow it seemed to fit. Stéphane Degout as Theseus is a vocal powerhouse, his bass-baritone perhaps not quite as nuanced as the other singers, but again compelling as a central figure, and he delivered a gorgeous Act V aria and duet with Francois Lis's Neptune, the drooping flute line a beautiful complement from Christie and his OAE players. Lis doubled as Pluto and Jupiter, singing beautifully but lacking the resonance in the low notes to really do these roles full justice. Christiane Karg's shiny soprano and appealing earnestness made her a charming Aricie, matched vocally by the lovely voiced Ed Lyon as Hippolyte. Unfortunately Lyon was not convincing in creating a character onstage, nor in his interactions with his colleagues. Katherine Watson stepped in to perform Diana in place of an indisposed Stéphanie D'Oustrac, and revealed an attractive lyric timbre, with a surprisingly strong chest register, a very good sign, but it's not yet quite fully integrated with the middle register. Following the suit of the rest of the cast, occasionally vocal nuance and focus on diction lead to interruption of the legato line, but this is a promising voice.

Overall this is a worthwhile production, with enough great music making to make the whole thing worth seeing. Let's hope that this is the first of many more Rameau operas at Glyndebourne!