This was a great way of spending an hour. Even in this reduced setting, the three soloists in concert dress with piano accompaniment, the overwhelming drama of Wagner's musical conception is what kept making itself felt. It helped that all three singers looked like they were in character throughout, even if actual stage movement was minimal, and in fact the piano accompaniment meant that the text came to the fore and the singers were able to do many more subtle and beautiful things with vocal colour and phrasing than would be possible or effective when faced with an orchestra. Peter Selwyn played the piano reduction with unerring sensitivity and vigour, tempos ideally chosen - clearly a very able Wagnerian.

As Siegmund, Ronald Samm revealed a thrillingly heroic sound, with a tight, Italianate vibrato and superb legato - always a treat to hear in Wagner. Almost most impressive was his evident care for the text and desire to communicate the drama through it. The vocal line was also beautifully shaded with a wide palette of colours - it is so rare to get Wagnerian singing of this refinement and power. I now really regret not having seen his Opera North Otello - his voice seems to me like it would be absolutely ideal for that role also.

Opposite Samm, Gweneth-Ann Jeffers' slightly husky, shining and wonderfully feminine sounding Sieglinde was a very sympathetic presence. The scooping into high notes could be forgiven because it didn't interfere with the beautiful phrasing or superb German diction - again Wagner singing of a very high order. I would have been very, very happy to have seen these two in place of who was actually cast at the recent ROH Walkure. Long may they continue singing this repertoire in this country - I will certainly be looking out for them, and hopefully they'll be cast together in a Walkure? 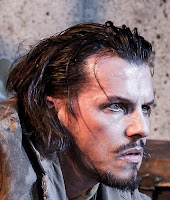 Simon Wilding's Hunding was also extremely impressive. There's an incipient wobble in the high notes, but it's hardly a deal breaker in this role or fach - the voice is thunderingly huge, the timbre of the inkiest darkness, ideal then, and his brusque and commanding delivery of Hunding's music was thrillingly forceful.

What a wonderful start to the season!