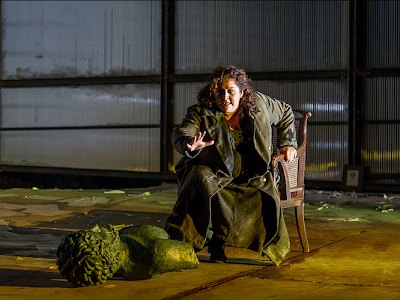 There's this myth that is still perpetuated by many that Strauss was a progressive up until Elektra and that from Der Rosenkavalier onwards, his compositional career represents a retreat from Modernity. To posit this view is to grossly misunderstand not just Strauss's compositional development and place in history, but more importantly perhaps for our understanding of Elektra, it represents a taking of the will for the deed, an attitude very common amongst people who claim that Elektra and Die Frau Ohne Schatten are Strauss's greatest operas. The "will" in question, or the "selling point" is that Strauss/Hofmannsthal produced a shattering study of the terrifying violence of the story of Elektra with up to the minute pyschologising and music, an exalted drama of extremes, marrying ancient and modern. The furious opening seems to set us up for just that, but we soon realise that something is up: the "deed", that is the actual notes on the page, the actual sound of the score, the actual experience of the drama (rather than what has been promised), is not quite as disturbing, as serious or shocking as intended or as is often claimed. If we know the score of Der Rosenkavalier well (and not just the famous excerpts) we soon realise that there is virtually not a bar in Elektra that doesn't have its counterpart in the sentimental comedy that followed it. Of course Elektra is much more clangorous and the subject matter very different, but the artistic parallels are undeniable and legion.

The frequency of near or direct quotations in Der Rosenkavalier makes comparison not just tempting, but unavoidable. The music of the whole second half of Elektra is so saturated with waltzes, so ravishingly plush, so gemütlich, that the music of both operas can seem cut from the same cloth. Once we hear it here, we can soon trace it back into the beginning of the piece also. Technique, style, harmonic usage, and so often the actual content of the notes, are identical! Not to mention the librettos, both by Hofmannsthal, which are very comparable in the way ideas are expressed and the way that the language is used, and also in their underlying philosophical message. I would go so far as to say that each work contains the other. The principal difference is a shift in the centre of gravity of the tone of each piece: in the later work towards parlando, nostalgia, sentiment and sentimentality, in the earlier one towards extremity, violence and huge orchestral apotheosis.

People will take from it what they want. I personally think Elektra is overrated and that both Salome and Der Rosenkavalier are more musically satisfying, honest and original works (despite their more apparent languors) because they are less pretentious and lie closer to Strauss's authentic sphere of genius. I also find that the unremitting extremity of Elektra's story and music very quickly makes one inured to its shock value, and its dramatic effectiveness is attenuated as a result. That said, I do still hugely enjoy it, perhaps more musically than as a dramatic whole, above all as a supreme example of Strauss's ability to compose for soprano and orchestra: it can't be doubted that this piece is the product of one of the most abundantly gifted of all composers at the very height of his powers. But the point remains - if Strauss did indeed start retreating (a highly dubious claim in my opinion), then it started before Elektra, not after. 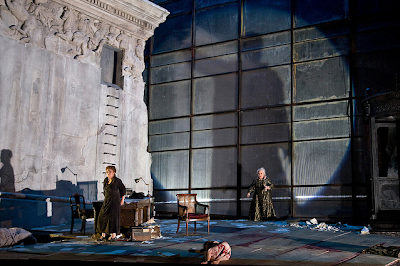 Charles Edwards' production updates the piece to a vaguely 20th century looking setting, though ancient Greece is present in the form of a ruin that has been co-opted for some new semi-industrial use. The house is falling to pieces, the carpets drenched with blood and boarded over, with papers, the records of the previous order, littering every surface. Elektra addresses a bronze bust of her murdered father, to which she is erotically attached; later she shows similarly incestuous attraction to her brother. Chrysothemis is the more glamorous sister, her (actually perfectly reasonable) desire to move on and forward with life appearing trivial and vain here. Klytamnestra is simply a cackling witch. The entire production is geared to make us sympathise with Elektra, not a far fetched interpretation, but it also makes some scenes feel overlong and dull because Elektra's mindset or moral superiority fundamentally isn't ever being challenged. Beyond this, it's a rather plain production which doesn't attempt to interpret too much - some will like this, others will find it boring. 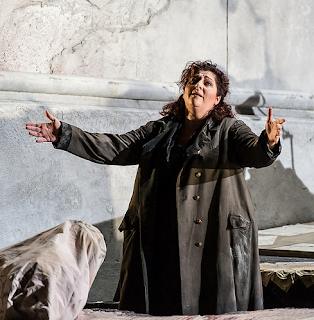 Christine Goerke scores a triumph as Elektra, magnificently managing every hurdle of Strauss' infamously impossible role, perhaps the most demanding 100 minutes of the soprano repertory. The voice is extremely large, tireless and always in tune - these three things alone elude most interpreters of the part. But it's also got a wonderfully rich, thick timbre, from the mahogany and steel of the chest register, to the intense power of the middle, to the driving, solid top. The vibrato is fairly wide, but is also very fast, which gives it an appealing vibrancy and truly dramatic carrying power. In her opening monologue, Goerke proved to be a committed actress, but it was her textual clarity and force of expression that impressed me the most. It is exceptionally rare to see this role so well sung.

Michaela Schuster's Klytamnestra was quite understated I thought as far as anyone can be in this role. Much of her delivery approached sprechgesang, the text extremely clear but at the cost of line and depth of vocal colour. The voice is large and fully up to the task required of it though. Iain Paterson's Orest is vocally decent though a little pale in the present company. Adrianna Pieczonka revealed a much larger voice than I suspected she had from her recordings (or perhaps it's grown in the last few years?) - in volume it yielded nothing to Goerke's instrument (though of course the role of Chrysothemis requires a little less stamina than the title role). It's a shiny, very generous dramatic soprano, and if diction wasn't always the clearest it was mainly because Andris Nelsons bizarrely encouraged the orchestra to blaze whenever Pieczonka was singing. This was a problem generally in the performance - Strauss's comic-serious instruction to play Elektra as if it was "fairy music" was never heeded by Nelsons. When everything is this loud and full throttle, the ear quickly tires, and actually there were orchestral balance issues so that much of Strauss's peerless orchestration didn't sound quite as magically as it can. More problematic still was simply not being able to hear words - I didn't hear a single one in the opening maid's scene, and even the heroic and diligent Goerke, while always audible, was often difficult to understand. The ROH orchestra certainly weren't at fault - the playing itself was largely excellent, the orchestral sound unified and (over-) brilliant, and at least Nelsons managed to keep the pit very well coordinated with the stage. A rip-roaring ride, and many will love the no holds barred attitude, but it's a conducting style that focusses on orchestral splendour rather than drama or musical detail. The elusive balance in Strauss between detail and power is something that only few conductors manage to achieve - that so many who do manage it are also superlative Mozart conductors gives credence to Strauss's "fairy music" comment. 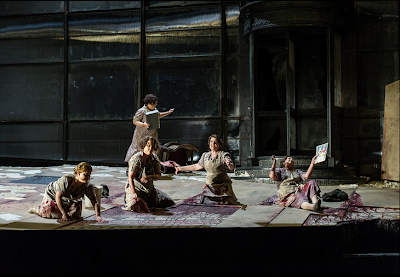