David McVicar is back at Covent Garden to direct this revival of his production of Mozart's most perfect opera. When it was done last season I wrote very positively about the production and music making. That review contains many of my thoughts about the piece and my basic thoughts on the production, so I won't recap, but this time I wasn't nearly so captivated.

The biggest problem was surely John Eliot Gardiner in the pit, whose approach to this music is sounding distinctly "old school" these days. Banning all vibrato, insisting on brisk tempos and dessicated, spiky textures, expunging any legato playing or sense of the longer line and leaving Mozart's ravishing orchestration undernourished due to poor balance were all perhaps hallmarks of early "historically informed performances" but we've moved on so far since the 1960's and 1970's. Just look at the magnificent work of the OAE or William Christie with Les Arts Florissants for modern HIP where the music is allowed to live and breathe again. (The recently departed Charles Mackerras and Colin Davis were also bastions of truly great Mozart performance with modern orchestras and contemporary taste.) The orchestral playing was scrappy throughout the entire evening - ensemble was poor, there were endless tuning problems and stage and pit were very often totally at odds. Banning a modern orchestra from using vibrato or legato is a very risky business - deprived of expressive resource, players feel very exposed and on edge and as a result tend to make poor music. 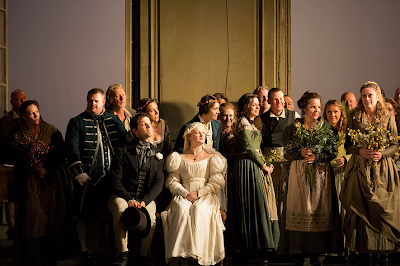 I found David McVicar's direction very fussy this time: the stage positively teems with extras, presumably to provide a sense of the daily bustle of the household and reflect the hectic activity of the score, but the result is always the appearance of "stage business" without any feeling of real life. Perhaps it was Leah Hausman's revival direction last time, or a cast that were better at acting, but for whatever reason, the show was more successful then. Character regie is very detailed throughout, but only intermittently convinces - what was with all the direct addresses to the audience, double takes, knowing glances and other self consciously "stagey" acting? The result wasn't bad exactly, but was quite uninvolving emotionally with little pain to temper the slapstick. 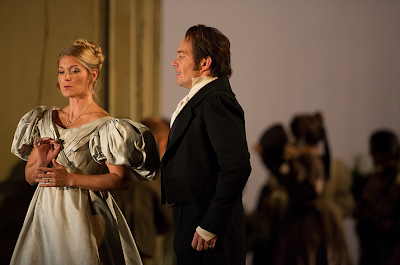 The cast is decent though not stellar. (I didn't envy any of them having to sing with what was going on in the pit, and it must have been off putting for all.) Head and shoulders above the rest is Christopher Maltman as Count Almaviva who is at every moment musically and dramatically expressive, the only fully rounded character on stage. Maria Bengtsson's Countess is vocally beautiful, if occasionally a little small scale. The sotto voce she did during the second "verse" of Dove Sono was arresting and lovely though. McVicar makes sure we know that the Countess is still a girl, but she is also totally in the thrall of Cherubino in Act II and so her protestations make her seem almost as vain as her husband. Mary Bevan impressed vocally as Barbarina, but shared with Bengtsson the unsettling feeling of looking somehow too modern - certainly something to do with their hair and make-up (probably no fault of their own) and perhaps also their bearing. Hard to put one's finger on, but definitely there. Lucy Crowe's Susanna was charming and very well sung, though occasionally a bit too cutesy acting wise for my taste. Renata Pokupic's Cherubino was short on legato and so struggled to make an impact vocally. Luca Pisaroni's Figaro was fine though a little bland vocally next to Maltman's Count - the timbral and expressive palette is by comparison quite narrow. Jean-Paul Fouchécourt is in the unfortunate position of having to play Don Basilio as an OTT gay stereotype, such a boring cliché in this role.

All in all a so-so revival. 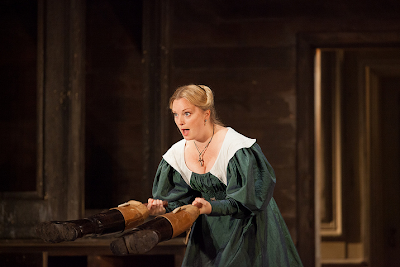