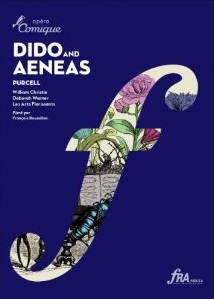 
A wonderful performance of Purcell's only opera which brilliantly balances the comic and tragic elements of the drama - the only thing one regrets is that it is over so quickly. In a DVD extra feature William Christie voices his suspicions that the piece is incomplete and notes points in the score where ad lib is written, as well as known about scenes that have gone missing (e.g. for the Sorceress) and also that much of the separately published libretto has apparently not been set to music. We cannot know because Purcell's music comes to us only through 18th century copies, from sympathetic hands who were determined that this music should last.

What does remain is of course magnificent, an ultra condensed, intense drama that is one of the most brilliant instances of the genre composed before Mozart. Christie is brave in fleshing out the ad libitum parts, and crafting a short Prologue with director Deborah Warner. Actress (and now sometime opera director) Fiona Shaw takes on this role, reciting portions of Ted Hughes' Echo and Narcissus, T.S. Eliot's the Wasteland and the famous Yeats poem "Aedh wishes for the cloths of Heaven". In common with most authentic Baroque prologues it's not directly relevant to the opera, but it proves an interesting opening. Fiona Shaw's skill in declamation and obvious knowledge of vocal resonance can only be compared with operatic singing - the utilisation of vocal registers and colours is unerring and virtuosic. Occasionally the voice cracks from too much pushing, and also she's more at home with the storytelling than the poetry, but she is engaging and sets the tone admirably. 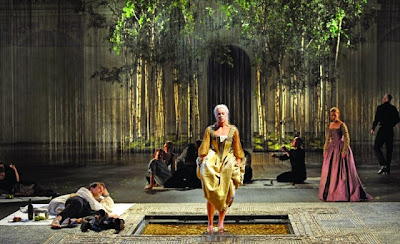 Deborah Warner's production takes as its starting point the story that Purcell composed this opera for a girls school in London, and so there is a huge sea of little faces that invade the action at certain moments. The chorus are in modern dress at the sides of the stage, observing and commenting on the action and occasionally interacting, and the central characters are all in 17th century costume and mostly act on a slightly raised central stage like in a Noh play. The whole thing appears to take place in a 17th century courtyard. It's understated but visually very striking and evocative of all the layers that are being combined here. Quite an achievement.

But what is even more impressive is the knitting together of the disparate dramatic styles to create a cohesive whole that entertains and moves at every point. Malena Ernman is a magnificent Dido, vocally beautiful, with a rich chest register and a beautifully pure soprano like top. She is also a superb actress, one of the most natural and subtle that I have ever seen in opera and her interactions with the equally superb Christopher Maltman as Aeneas are worth the price of the DVD alone. Maltman could also simply not be bettered either dramaitcally or vocally - the vibrato is maybe a teensy bit wide at times, but the text is beautifully articulated and his acting again a model of sensitivity and nuance. His character registers far more fully than normal and in some ways is the linchpin of the production. Very special indeed. 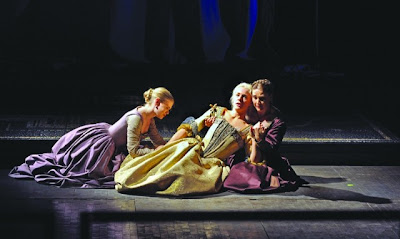 On the comedy side, Hilary Summers is a really fantastic sorceress, her acting hilarious and commanding, and her trademark timbre, hollow, androgynous and eerie, quite unlike any other singer's that I have heard, is quite ideal for the role. Deborah Warner makes her as contrasted as possible from Dido, removing any sense of grace or elegance by giving her aggressive and manly mannerisms and a terrifyingly capricious sense of humour. She does not neglect the character's central sadness either, and one is most frustrated that her part isn't bigger. Her assistant witches are maybe the only slight weakness of the production and they can become a little irritating, but not enough to spoil anything.

The contribution of the choir and orchestra of Les Arts Florissants and William Christie is as faultless as ever, and if I wouldn't quite put this alongside their absolute best ever work, it would be difficult to name people who could do it better.

This is probably the best version of the opera on DVD then as Connolly is scuppered by the terribly boring ROH production and the Hickox/Ewing 1995 one is an "opera film", a genre which I have a very hard time enjoying. Highly recommended.
at 23:05