The recital opened with Beethoven's Violin Sonata No 6 in A op.30/1. Musicologists and program note writers love pointing out that the title page of these and other late classical/early romantic string sonatas denote that they are Sonatas for pianoforte with violin accompaniment, not the other way round as we usually think of violin sonatas. This always seems like irritating knit picking when it's stated in dry prose, but this performance seemed to embody this idea. Eschewing legato, pianist Olli Mustonen dominated the aural picture, smashing out every sforzando and right hand melody with brutal percussive force - the lack of contrast or release made for tiring and even irritating listening from him. Especially so when Pekka Kuusisto's violin playing was so spellbindingly brilliant, finding endless nuance, fun, and interest in even the simplest phrases, fast passages dazzlingly dispatched, a chain of lissome, searching string sound. Not everything that comes out of his violin is beautiful, and sometimes the sound can even be downright ugly, but it's always surprising, unaffected and totally convincing. Occasionally he'll also just spin the most breathtaking phrase that follows every rule of tasteful "proper" playing. I simply don't know of any other currently performing musician that is so open to risk taking or unbeholden to previous standards and so manifestly an artist of the first standing (this last thing is important in light of the first two things). Kuusisto's musical choices in the Beethoven were as quirky and unconventional as Mustonen's but the difference was that he managed to create living, breathing art, whereas Mustonen remained merely weird and violently loud.

Observing Kuusisto playing, and as a string player admiring his freedom, it became obvious to me where his very particular genius lies. His left arm is as good as anyone's, with beautifully accurate intonation, a large palette of vibratos, and superb virtuosity. But it's his right arm (that is his bowing arm) that is truly exceptional and puts him musically ahead of most of his peers. The freedom of movement, supreme control, and ceaseless exploration of approaches to the bow affords him an unlimited expressive resource and infinite musical possibilities - his range of timbres, colours, articulations and phrasing choices is bewildering, and the speed and ease with which he can switch between them equally unfathomable. And after all this wild stuff that no one else can do, he'll whip out some old school perfect Russian bow hold (Heifetz/Elman/Oistrakh/Kogan take your pick) and play with the imperious nobility of these old masters.

For those that don't much care about the subtleties of string technique, what this translates to for the listener without fail is edge of the seat music making where you have to hang on every note for fear of not taking in what is unfolding in front of you. But fear is not the right word to describe the experience of seeing him play - joy is closer. The barrier between musician and music is invisible. Just this week I commended Carolin Widmann as being a model of great string playing, but this is the absolute opposite and equally beautiful.

The second item on the program was the world premiere of Mustonen's own violin sonata. The first movement opens with an angular figure that is relentlessly continued in the violin virtually without pause, gradually building to a climax of considerable power and intensity that feels very Schnittkerian. The second movement starts with an extended almost direct quotation/transcription from portions of "Dance of the Earth" from The Rite of Spring (my brief over the shoulder scan of the program notes made no official mention of this) but soon this is combines with the mania of a middle period Shostakovich scherzo, and the thundering extremity of Ustvolskaya. (After Googling the proper spelling of her name, I see that by amazing coincidence Tom Service has just this week written an article about her at the Guardian website which is good as an introduction if you aren't already familiar with her singular oeuvre). A more lyrical episode follows before a dutiful recapitulation of the opening. There are some excellent moments, and bits that are memorable, but overall it feels a little too derivative for comfort - the nagging feeling that there is nothing here that hasn't been done more inventively by the composers mentioned above. Still an excellent performance by both artists and one that surely must be considered close to definitive, Mustonen's piano writing clearly reflecting his playing style and Kuusisto fully up to the demands of the tortuous violin writing.

Stravinsky's Duo Concertante opened the second half. In general, Stravinsky's piano writing is usually rather percussive which meant that Mustonen had a field day, never giving the lyrical violin part room to breath, smothering it in a welter of xylophonic bangs and crashes. We only have to hear Stravinsky's own recording with Szigeti to hear that this was not at all what he intended. Only in the final movement, where the piano has long chords while the violin plays its awed, exquisitely carved melody, was the right balance achieved and the restrained neoclassical beauty of the piece revealed.

Ravel's violin sonata has always seemed to me to be a weak link in his otherwise flawless oeuvre, but Kuusisto played it more convincingly than I have ever heard it previously. The first movement emerged as a naively youthful romance, Kuusisto spinning a delicate line of melting ardency and sweetness, a hundred miles from the crystalline artifice that Ravel is famed for and that we all think we know. Or maybe we've all just been missing the point - the frail heart of Ravel has never been so tenderly revealed to me. The pizzicatos that opened the second movement "Blues" were hilariously abrupt and unringing from Kuusisto, but then it all became clear 30 seconds later when the piano started making the exact same noise when accompanying the violin. Totally uncanny. There's very little that actually suggests the Blues about this movement, but Kuusisto again seemed to get it exactly right with his free floating, almost casual approach, with nothing too emphatic: many violinists completely over-egg the written portamentos, and are much too insistent rhythmically. The Perpetuum Mobile finale is never somehow the rip roaring finish that it seems to be aiming at, and again Mustonen was too loud to let the violin figurations speak. A shame, as he had up until this movement given his best contribution of the evening, supporting the violin line very beautifully in the first movement as well as bringing lovely details to the fore, and also acting as a brilliantly clear, stable base for Kuusisto's hazy intonations in the second movement.

We got two encores. The first was Stravinsky's Tango in an arrangement for violin and piano by Mustonen. The second was the second of Prokofiev's melodies op.35. In the poco piu mosso section after he applied the mute, Kuusisto found a sound I've just never heard before, veiled, unearthly, domed, that nonetheless had immense vibrancy, like a distant beautiful voice heard over a lake.

Unfortunately youtube has very few clips of Kuusisto's playing, and nothing quite captures what I have been writing about. There is a video of him winning the Sibelius violin competition in 1995 aged 19. It's played very straight and the control is immaculate. It's almost boring because he's playing it as if it's nothing, and surely the heroic struggle is part of the drama and brilliance of the final movement of this concerto. A friend of mine joked that he decided to just nail it because it would be good for his career and then he could do what he wanted:

The next video is a closer indication to his freedom and imagination now - though the footage is frustratingly scant. Presumably the whole video recording exists somewhere...

An utterly beautiful though more restrained recording of the four seasons exists on CD: 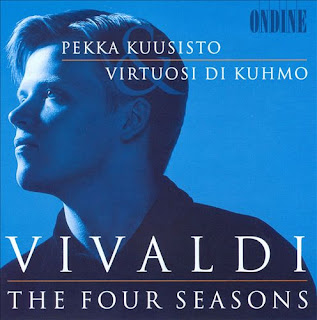