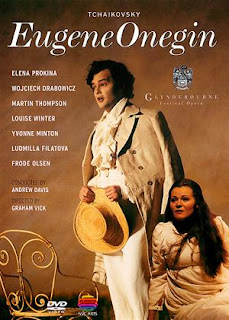 Graham Vick's Glyndebourne Onegin has attained a sort of legendary status amongst English opera goers since it was premiered in 1994 and so I thought I better check it out to see what the fuss was all about. Set in 1820s Russia, with accurate and understated period costumes, this is a very traditional looking production which is nonetheless rather spare aesthetically. The sets often add a degree of abstraction to the period feel - Act I has a painterly sky with a single row of corn at the back, and otherwise leaves the set as a wide open space. The Polonaise that opens Act III is presented as a sort of comedy pantomime ballet that is quite surreal and unlike the rest of the production in style, and the set, comprised only of swooping mint green curtains, is also at its most abstract here. The effect is uncomfortably artificial which is the intention I suppose, but it also feels like a set piece that is separate from the rest of the action which I am not so much a fan of. The staging for the Act II Ballroom scene is the most naturalistic and comes off as the most successful - a feeling of real atmosphere and specific setting is created here where elsewhere these things remain vaguer.

Largely then, Graham Vick chooses to focus on character Regie, which relies on having a cast that is capable of delivering strong and subtle acting performances.

Wojciech Drabowicz is vocally wonderful, and apart from occasional scoops into high notes, his beautifully rich and fluid baritone is completely ideal for Onegin. For once the character also looks believably youthful, with his slim frame, wild hair and posturing stance. Unfortunately, Drabowicz can be too ambiguous acting wise and indulges in the head shaking mode of emoting, which the production's Lensky is also guilty of. In general though he does a pretty good job as a dead pan Mr Darcy-esque figure, though his expression is more jovial/mocking which I'm perfectly happy with as an interpretation generally, and he is very good in the final scene. In this production, this scene mirrors the garden scene where Onegin rejects Tatyana - just two chairs placed at a distance from each other in the space. A nice idea, but unfortunately the earlier scene makes very little impact because there's no interaction whatsoever between the two characters and the aria is basically delivered as if Tatyana isn't there - we don't get to see her reaction at all.


Elena Prokina is also excellent in the last scene, and generally excels as the mature Tatyana both vocally and dramatically. Her piano singing is very beautiful, but I wonder how it sounded in the theatre - I suspect at times it is less than fully supported. If I'm being picky, which I always am, I'd say her chest register is a little underdeveloped for the role, but more critically her top becomes harsh when pressure is applied, and intonation in this region can also be unsteady. Acting wise, just as with Onegin, I imagine that she was good in the theatre, but up close her facial expressions are quite limited in range (wide eyed surprise, along with wildly darting eyes which it would be difficult to imagine doing alone, sadly feature a lot in the letter scene and elsewhere) and too often she seems to be demonstrating an emotion rather than really feeling it as the character.

Martin Thompson makes a fine Lensky. After a dicey first phrase in the famous Act II aria "Kuda, kuda vï udalilis" he turns in what is maybe the best account I have ever seen of this beautiful aria. Truly gorgeous. The "golden days of youth" are genuine for this Lensky and we have witnessed them: unusually, he is as playful as Olga in the opening scene, he has a sense of humour about himself, and for once Olga is not either turned off or merely amused and indulgent of Lensky's poetic overtures to her. Louise Winter is a decent Olga, but the production is not that concerned with her plight and doesn't attempt to flesh out the character too much.

With the exception of Frode Olsten as Prince Gremin, the minor characters are not well cast. Olsten has a very bright sound for a Gremin and is surely a bass baritone, but the voice is even and smooth and his aria is very well delivered. Ludmilla Filatova is simply dreadful as Filippyevna, barely in control of a not very beautiful voice. Yvonne Minton is barely better as a dramatically uncommitted Madame Larina. The production's Monsieur Triquet is also a disappointment and gets quite out of time in his aria.

Orchestrally, this performance is pretty spectacular. Andrew Davis' conducting is superb, drawing endless colours and nuance out of the orchestra, with a sweep and sense of large scale pacing that can only be described as symphonic. Every detail is in place, every string line is beautifully shaped, every phrase speaks and soars. Glyndebourne's commitment to the rehearsal process again pays dividends.

There are problems with the filming. Some are technical stage things - e.g. wig lines are irritatingly visible and in no way disguised. This detail as well as many of the complaints that I have listed above with regards to the acting would probably not have registered so much in the theatre, but the opera recording is a much less forgiving medium as each acting choice is more explicitly revealed, and so less is ambiguity is left for the viewer to fill in with their imagination. There are a lot of close ups, and sometimes I wanted to see more of what was going on on the whole stage. I can see why this would have got raves in the theatre, but on DVD it's not quite so convincing as a total performance. Still, despite there being better performances on DVD, this is a fine production, with excellent singing from the boys, and well worth watching for fans of the opera.