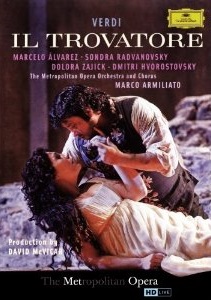 Il Trovatore is not overall my favourite Verdi opera but it does contain a hell of a lot of great music and has the potential to be very interesting drama if staged sensitively and the "four greatest singers in the world" that have no doubt been hired for the production also happen to be excellent actors. These famously impossible demands make great performances of the opera few and far between, and this Met broadcast DVD makes clear the difficulty of staging a great Trovatore while providing just about enough pleasure to make it worthwhile.

Dmitri Hvorostovsky is probably the pick of the cast as Il Conte di Luna. The legato is unmatched, the voice very beautiful, and though he can be hectoring in more dramatic phrases (he's really a lyric baritone) he is clearly still a world class voice. Acting wise he does rather well, convincing as a complex bad guy made evil only by love/lust - the Act II aria "Il balen del suo sorriso" is wonderfully delivered. Still, as ever with this artist, the voice is the thing.

Sondra Radvanovsky's voice is very distinctive and she makes a vocally excellent Leonora. Some will find the very fast, "always on" vibrato a little disconcerting and indeed the line between beauty and ugliness in her sound is often dangerously close - in less beguiling moments there is a tendency towards both shrillness and being flat. On the whole though she is on top form here and to my ears her beautiful singing greatly outweighs the less pretty moments - the voice is clearly of Verdian size, the legato is truly excellent, the dynamic range enormous, the coloratura is in place, and technically she manages every hurdle. The trill is lacking, but it seems that one can hardly expect this these days. The top has a diamond brilliance and a total solidity that is very appealing, and she has a very convincing chest register which is mostly well employed. The middle is where the vibrato can sound strange - occasionally there's a sort of metallic hollowness - though the metal is capable also of soft caress and great smoothness. As I say a quite distinctive voice.

Unfortunately she is let down by shallow acting and a lack of grace on stage that conspire to make her uninvolving as a stage personality. David McVicar clearly sees Leonora as a silly girl who is out of her depth but it makes for a boring characterisation. Much worse in this regard however is Marcelo Álvarez as Manrico who gives a painfully caricatured performance, a perfect impression of the "Italian tenor" that we all like to think the opera world has moved on from: stock gestures, mugging, never one movement when eight will do, little interaction with other characters. Vocally he is fine though produces nothing that is that special and it's difficult to see past the abysmal acting.

Azucena has been a calling card for Dolora Zajick for her entire career, but this DVD captures her at a late stage when the voice has become very work hardened and the sound quite unattractive. The vibrato is still fast and so couldn't be called a wobble, but it has become very wide, such that her (admittedly reduced) trills are essentially indistinguishable from the vibrato. Still her formidable technique has kept everything in place and no one could accuse her of not being able to sing it. Dramatically it is difficult to imagine that this role is so closely identified with her - the blankness and lack of life behind the eyes is hard to fathom. Marco Armiliato is fine though entirely unexceptional in the pit.

Players of David McVicar Bingo will be pleased to find all of his hallmarks here - the massive rotating wall, the inexplicably shirtless men, the unrealistically coloured sets, the updating to the 19th century, and men and women behaving badly. It's rather plain and I don't think it's one of his better productions, though maybe it would work better in the theatre without the interference of the unbearable Met Opera video direction. As so often with these broadcasts, the camera is constantly in motion, forever gliding, panning, zooming and/or tracking so that one's attention is constantly drawn to the filming and not the performance. Of course an opera DVD will not be like being in the theatre because of the close ups and cuts, but these directorial decisions don't even come from the realm of cinema - large camera movements tend to be used sparingly in films because the effect is so stylised and "filmic". It might not annoy everyone, but I find it maddening and it speaks to me of the lack of taste and understanding that the Met has for what the art form is really about.